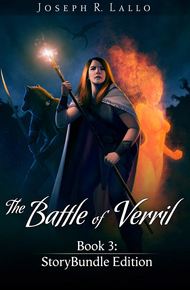 The Book of Deacon - Book 3: The Battle of Verril by Joseph R. Lallo

In this, the finale of the Book of Deacon Trilogy, Myranda and the Chosen face their greatest challenges yet. Time is running out, and the Generals are growing desperate. Through victory and defeat, reunion and betrayal, neither the heroes nor their foes will rest until they have seen their task through to the end. The only question is, will it be the end of a war, or the end of times?

This edition has been fully revised and reformatted, breaking the story into chapters for first time.

When Myranda awakened, she was falling through the air, deafening cheers in her ears. She landed painfully on the dusty ground, her twisted joints, skewered arm, and perforated skin all making their presence known once more. After struggling to her feet, Myranda's blurred vision began to clear.

She was in the middle of a large, dirt-covered field. A high stone wall surrounded her. There were doors large enough to pass a carriage through with room to spare at opposite ends of the courtyard. At the top of the wall were downward pointing spikes. Beyond them was row after row of soldiers, weapons in their hands and murder in their eyes. Those nearest to the wall were in full armor, faces hidden behind the face guards. No doubt they were nearmen. Here and there, slung between spikes, was a large example of the storage crystals.

The wizard must have spent some time away from the parasitic gems, as a fair amount of her strength had returned to her. Quickly as she could, to avoid feeding the thirst of the crystals for any longer that was necessary, she healed the more grievous of her wounds. The white cloak she had worn was missing, leaving her only with her thin, hardly adequate tunic. Around one wrist was a shackle, its lock apparently twisted beyond opening by the blast that had earned her this fate. A short length of chain hung from it. An icy wind blew as the setting sun heralded the beginning of a long, cold night. The breeze chilled her, but what chilled her more were the deep furrows and crimson stains that littered the courtyard. There was little question what this place was, and even less question as to why she'd been brought here.

"Myranda Celeste!" came a booming voice from high in the stands surrounding the arena.

Her eyes shifted to the source, though the voice was unmistakable. General Bagu stood upon a balcony isolated from the crowd. Half of his face was a mass of black scars, a smooth black orb where his right eye should be. For a moment, Myranda questioned why he'd not healed himself. Could it be that they were especially vulnerable to their own magic? His thundering voice shattered her thoughts.

"You have been judged guilty of the crime of treason. You have fought against the soldiers of your homeland, and you are responsible for the deaths of two of the generals of the great Northern Alliance," he proclaimed, the crowd screaming for blood. "The penalty is death. However, though we value justice, we value strength still higher. You shall be subjected to trial by battle. If you prove yourself greater than any challenge we can put before you, you shall be allowed to live. Do you have anything to say before the trial begins?"

Myranda's eyes swept over the crowd. The hate they felt for her was palpable. She looked again to Bagu. To one side was Demont, a somewhat impatient look upon his face.

"I have committed no treason. To commit treason, one must injure one's own nation, and I have none. The Northern Alliance is an army, and nothing more. A means to prolong a war. If I must die for resisting that, then so be it," she replied.

"So be it indeed. Let the trial begin!" Bagu decreed.

The doors at one end of the arena were thrown wide and a pair of the beasts Myranda had faced when she first encountered Bagu were released into the arena. Vast, gray approximations of wolves with stiff, stony hides covered in needle-sharp rocky spines, the beasts circled around her. Myranda looked quickly about. There was nothing. Not a weapon. Not a piece of cover. Magic was her only recourse.

She rushed to the wall, as far between the crystals as she could manage. Gathering her mind, she waited as the beasts circled together and charged at her. With a swift, monumental thrust of her mind, she wrenched one of the creatures into the air, one of Deacon's tricks. The heavy creature's momentum carried it into the wall behind her with a sickening crack. There was a rain of the spines that protruded from the creature's back as the beast dropped to the ground to struggle a few last times. After a final twitch, the beast crumbled into a pile of spikes and stones.

Myranda attempted to repeat the attack on the other creature. She managed to get it off of the ground, but the draw of the crystals robbed the spell of the strength it needed, sending the beast tumbling to the ground.

Myranda tried to gather herself for another attack, but the crystals drank everything she had before it could be put to purpose. It was as though the gems were able to attune themselves to her magic, something that they had never done before. There was no time for her to ponder this new discovery, however, as the creature had rolled to a stop and was struggling to get back to its feet. Running was useless, as it would quickly overtake her. With no other options, she ran toward the beast. Just as it got to its feet, Myranda jumped to the creature's neck, slashing one of her legs on one of the few spikes still intact after the tumble. She whipped the chain dangling from her wrist over the creature's neck and pulled it taut.

The wolf bucked, tossing her about like a rag doll, but Myranda held firm. Alas, while it could not throw her from its back, neither did the chain do even the slightest damage. Desperate, and knowing that if she were thrown free it would be the end of her, Myranda raised her hand and summoned a bolt of black magic. The bluish-black ball of crackling energy struck the beast on the head, bringing a sudden and complete end to its rampage. As it slid to a halt, Myranda dismounted.

The lingering aftermath of the attack was quickly drawn into the nearest crystal. Already it had taken on a discernible glow, and the others were not far behind. Myranda shook with anger. It was brilliant, in a terrible, sinister way. They had found a way to turn any outcome to their favor. If she fought, they would have her strength. If she didn't, they would have her life. As the doors began to creak open again, Myranda thought feverishly. There had to be a way out of this.