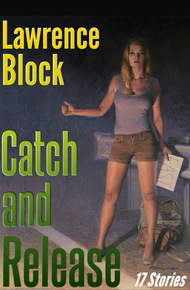 Lawrence Block has been writing award-winning mystery and suspense fiction for half a century. His most recent novels are The Burglar Who Counted The Spoons, featuring Bernie Rhodenbarr; Hit Me, featuring philatelist and assassin Keller; and A DROP OF THE HARD STUFF, featuring Matthew Scudder, brilliantly embodied by Liam Neeson in the new film, A Walk Among The Tombstones. Several of his other books have also been filmed, although not terribly well. He's well known for his books for writers, including the classic Telling Lies For Fun & Profit, and The Liar's Bible. In addition to prose works, he has written episodic television (Tilt!) and the Wong Kar-wai film, My Blueberry Nights. He is a modest and humble fellow, although you would never guess as much from this biographical note.

Catch and Release by Lawrence Block

The Master Returns—With Never-Before-Collected Tales of Murder and Desire One of the most highly acclaimed novelists in the crime genre, Lawrence Block is also a master of the short story, with award-winning work ranging from the macabre to the slyly comic, from heart-stopping tales of revenge to memorable explorations of lust and greed, all told in Block's unforgettable style.

The sixteen stories (and one stage play!) collected here feature appearances by some of Block s most famous characters, including gentleman burglar Bernie Rhodenbarr and alcoholic private detective Matt Scudder, as well as glimpses into the minds of a rogue's gallery of frightening killers, dangerous sociopaths, crooked cops, and lost souls whose only chance to find themselves may be on the wrong side of a gun. You'll meet a compulsive hoarder whose towering piles of trash and treasures hide disturbing secrets...a beautiful young tennis star with a rather too possessive secret admirer...a dealer in stolen art who is unwilling to part with his most prized possession at any price...poker players with agendas that have nothing to do with the cards in their hands...and a catch-and-release fisherman whose preferred catch walks on two legs.

Terror and passion, cruelty and vindication—it's all here, in a collection that will thrill you, scare you, and remind you why Lawrence Block is still the best there is at what he does. This is the book that led Publishers Weekly's reviewer to enthuse, "If Block were a serial killer instead of one of the best storytellers of our time, we'd be in real trouble."

As curator for this bundle, I had the honor—and the responsibility—of recruiting appropriate authors and books. Lawrence Block is one of my literary idols and was among the first authors I asked to contribute. He is, quite simply, a legend in the field of genre fiction and an incredibly gifted writer, in addition to being one hell of a nice guy. Catch and Release stands as the catch of the day for Action/Adventure readers, and I can't wait for you to check out this gem. – Allan Leverone

When you spent enough time fishing, you got so you knew the waters. You had certain spots that had worked for you over the years, and you went to them at certain times of the day in certain seasons of the year. You chose the tackle appropriate to the circumstances, picked the right bait or lure, and tried your luck.

If they weren't biting, you moved on. Picked another spot.

He was cruising the Interstate, staying in the right-hand lane, keeping the big SUV a steady five miles an hour below the speed limit. As he passed each exit, he let up on the gas pedal while he kept an eye out for hitchhikers. There was a string of four exits where they were apt to queue up, college students looking to thumb their way home, or to another campus, or wherever they felt a need to go. There were so many of them, and they were always going someplace, and it hardly mattered where or why.

He drove north, passed four exits, took the fifth, crossed over and got on the southbound entrance ramp. Four more exits, then off again and on again and he was once more heading north.

There were hitchhikers at each exit, but his foot never touched the brake pedal. It would hover there, but he always saw something that made him drive on. There were plenty of girls out there today, some of them especially alluring in tight jeans and braless T-shirts, but they all seemed to have boys or other girls as companions. The only solitary hitchhikers he saw were male. And he was not interested in boys. He wanted a girl, a girl all by herself.

Luke, 5:5. Lord, we fished all night and caught nothing.

Sometimes you could drive all day, and the only reason you'd have to stop was to fill the gas tank. But the true fisherman could fish all night and catch nothing and not regard the time as ill-spent. A true fisherman was patient, and while he waited he gave his mind over to the recollection of other days at the water's edge. He'd let himself remember in detail how a particular quarry had risen to the bait and taken the hook. And put up a game fight.

And sizzled in the pan.

When he stopped for her, she picked up her backpack and trotted up to the car. He rolled down the window and asked her where she was headed, and she hesitated long enough to have a look at him and decide he was okay. She named a town fifty or sixty miles up the road.

"No problem," he said. "I can just about take you to your front door."

She tossed her pack in the back, then got in front beside him. Closed the door, fastened her seat belt.

She said something about how grateful she was, and he said something appropriate, and he joined the stream of cars heading north. What, he wondered, had she seen in that quick appraising glance? What was it that had assured her he was all right?

His face was an unmemorable one. The features were regular and average and, well, ordinary. Nothing stuck out.

Once, years ago, he'd grown a mustache. He had thought it might give his face some character, but all it did was look out of place. What was it doing there on his lip? He kept it there, waiting to get used to it, and one day he realized that wasn't going to happen, and shaved it off.

And went back to his forgettable face. Unremarkable, unthreatening. Safe.

"A fisherman," she said. "My dad likes to go fishing. Once, twice a year he'll go away for the weekend with a couple of his buddies and come back with an ice chest full of fish. And my mom gets stuck with cleaning them, and for a week the house totally smells of fish."

"Well, that's a problem I'm spared," he told her. "I'm what they call a catch-and-release fisherman."

"You don't come home with a full ice chest?"

"I don't even have an ice chest. Oh, I used to. But what I found over time was that it was the sport I enjoyed, and it was a lot simpler and easier if the game ended with the fish removed from the hook and slipped gently back into the water."

She was silent for a moment. Then she asked if he thought they enjoyed it.

"The fish? Now that's an interesting question. It's hard to know what a fish does or doesn't enjoy, or even if the word enjoy can be applied to a fish. You could make the case that a fish fighting for its life gets to be intensely alive in a way it otherwise doesn't, but is that good or bad from the fish's point of view?" He smiled. "When they swim away," he said, "I get the sense that they're glad to be alive. But I may just be trying to put myself in their position. I can't really know what it's like for them."

"One thing I can't help but wonder," he said, "is if they learn anything from the experience. Are they warier the next time around? Or will they take the hook just as readily for the next fisherman who comes along?"

She thought about it. "I guess they're just fish," she said.