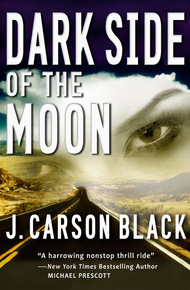 Dark Side of the Moon by J. Carson Black

When two newlyweds are found murdered at an Arizona campground, Laura Cardinal is enlisted to investigate. Still reeling from a tragedy of her own, teamed with a partner who's working her last nerve, and with no solid leads, Laura's already walking an emotional tightrope.

Then she meets the locals who greet her questions with silence and paranoia. The lies Laura uncovers create a chilling portrait of the dark side of love. And when she discovers one victim's ties to an underground organization, she is plunged into a high-stakes conspiracy played out against the unforgiving backdrop of the Mojave Desert, where there are no second chances . . . .

I think of J. Carson Black almost as a sister. The sister who got all the talent and looks in the family. She's funny and engaging, and boy can she write. Dark Side of the Moon features Arizona criminal investigator Laura Cardinal, and if you can find a more compelling character—male or female—in the world of genre fiction, you're a more accomplished reader than me. Check this book out and see if you don't agree. – Allan Leverone

Laura started the next morning already at a deficit. The clock radio failed to come on, and she hadn't slept well, waking at midnight and drifting off around three a.m. Looked awful from the lack of sleep, so she got some ice from the ice bucket and applied it under her eyes with a washcloth while she downloaded her e-mail. One e-mail she had to read, from Janet Weir, the artist and real estate agent who had sold a house for the head of the Earth Warriors. Janet Weir supplied Laura with a name: John J. Traywick. Janet had lost track of him a long time ago, but was sure he had moved to Arizona.

Laura arrived at the US attorney's office five minutes late, her hair still wet. Chuck and Louise Yates sat beside a sullen Shana Yates, who seemed scrawny and haunted next to the colorful Marty Gaar. Marty Gaar favored chiffon and color, and wore shoulder pads that made her look like a linebacker—a five-foot tall linebacker. Reading glasses hung from beaded chains on her ample breast.

Jon Service, a Flagstaff resident and FBI special agent Laura knew from Tucson when he'd worked down there, sat opposite Shana. He stood when Laura entered the room and gave her a flicker of a smile. His eyes were clear and blue, but carried the burden of the job in the fleshy bags underneath.

Laura liked Jon; he seemed easygoing, but missed little, and there was something comforting about his stolid bulk. What she liked best about him was the fact that he didn't act superior. Laura had no doubt that somewhere deep inside, hard-wired into him from Quantico, there was the belief that all other law enforcement agencies—and their officers—were inferior, but to his credit, Jon didn't show it. She understood that because she had the same mindset regarding the local agencies she worked with, and she strived not to show it either.

Jeremy Sharp, the US attorney, joined them. Short, balding, and young, he had soft features, pale skin, and startling black hair. In his call to her last night, Jon Service explained that Jeremy Sharp and Marty Gaar were good friends who shared a love of antiques—for a couple of years they'd worked together as prosecutors for the Coconino County Attorney's office. Their friendship had apparently played out last night, and had helped expedite this deal.

From the moment Sharp first spoke, it was clear that both the US attorney and Marty Gaar had done all their homework and were already in agreement. Apparently, there had been a flurry of faxes and phones calls last night, clearing the way for Shana to tell her story.

Foregoing the preliminaries, Shana's lawyer announced that Shana wanted to bring Dan Yates's killer to justice and had decided to tell them everything she knew to achieve that end.

Laura was now allowed by Marty Gaar to ask her questions. Shana answered in a monotone, but she didn't evade. Every time she got that stubborn look on her face, Marty Gaar would nudge her.

She spoke as if she were reciting a memorized piece for a high school class. Yes, she was a member of the Earth Warriors. Yes, she had participated in the burning of the SUVs and Jimmy Davis Ford.

Yes, she did think that Bobby Burdette killed Dan and Kellee.

"Why do you think that?" Laura asked her.

"Because Dan figured it out about the SUVs. Bobby was worried he'd find out about—"

Marty Gaar stopped her by placing her plump, freckled hand on the girl's skinny, brown one. She looked at Sharp.

Suddenly, Laura light wavered at the edge of her right eye. She concentrated on the air right next to Shana's face, which shimmered in and out of the light. Made herself focus.

Shana took a deep breath. "You want me to tell them about the trucks?"

"You have to," her lawyer told her.

"Bobby told me about this plan they had." She looked at Marty, and Marty nodded.

"Bobby, Jack, and Glenn. They weren't going to do anything dangerous," she added quickly. "They just wanted it to look that way."

Laura glanced at Jon Service, nodded. Let him do the questioning.

"Who are Jack and Glenn?" he asked Shana.

"They run the Earth Warriors."

"Do you know their last names?"

The name Jack Taylor was maddeningly familiar—someone important, someone she had met, but she couldn't remember when or where she had met him. The damn bling-blinging at the edge of her vision was making it hard for her to think. The name Traywick, though—that she had seen in an e-mail just this morning. John J. Traywick.

She wrote down the three names: Jack Taylor, Glenn Traywick, and John J. Traywick. Looked at each name in turn, the lights flashing like shining salamanders, wrapping their tails around her vision. Laura ignored them as best she could, trying for a connection. When it wouldn't come, she looked at Shana. "What were they going to do?"

"Have you ever heard of the WIPP project?"

"It stands for Waste Isolation Pilot Plant. It's that place down in New Mexico, near Carlsbad? Where they bury nuclear waste? They truck low-grade plutonium from the Nevada Test Site to WIPP all the time."

Plutonium. Laura was aware of the smile frozen to her face.

Laura knew where this was going, even as Shana's voice droned on. It fit the kind of guy Bobby Burdette was. A creep who drove a lime-green Dodge Challenger and who buried his girlfriend with bottles of Dansani and Luna bars.

He planned to hijack one of the trucks.