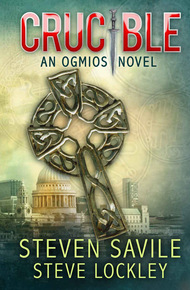 1996, London. The Troubles are in full flow. A young Irish officer, Ronan Frost, is deep undercover inside an IRA cell in London. Something big is happening. Something devastating. Something that will shake the foundations of Anglo-Irish relations and make sure the peace process stalls. The Ogmios Team doesn't exist. Sir Charles is not confined to a wheelchair. This is where it all begins. With a betrayal.

Steve is one of my closest friends in the business and a bundle of special ops titles just wouldn't be complete without one of his Ogmios Team books. Steve's novel Silver was absolutely brilliant and Crucible is just as good, if not better. In Crucible, it is 1996, the Troubles are in full swing, and an Irish officer named Ronan Frost is working undercover in an IRA cell in London. It starts here, with Frost and a betrayal. – Joseph Nassise

The air was alive with the sounds of death.

The thunder of tanks rolling into Wenceslas Square.

Everyone knew that the troops were coming. People had built makeshift barricades across the streets as they opened into the square. Burned out cars and buckled bed frames, and anything else they could scavenge. They were no match for the relentless tanks.

Charles Wyndham checked his watch. He'd barely managed a couple of hours of sleep. He felt like crap. It was going to have to be enough.

"Tanks?" He said as he listened to the twisted dawn chorus in the near darkness of the room. It brought back memories that he'd rather forget. He could smell it out there. Death.

"You might want to take your shoes and socks off and count those little piggies, see if they are all there. I wouldn't trust this lot as far as I could throw them, and that, Charlie Boy, ain't very far." Paddy O'Dwyer stood at the side of the window so he could look out in the street without being seen from below. The absence of light in the room behind him and the darkness of the street meant he could have pressed himself against the glass and remained virtually invisible, but he wasn't taking any chances.

"Any word from back home on what we're looking at?" Charles asked. If the Russians were moving into the city it was going to make their lives a whole lot more unpleasant. All they could do was watch and wait. The waiting was the worst part. They had their orders, but they couldn't carry them out without one key piece in the puzzle: the principal. They'd been sent in to be help with a defection, making sure the principal was smuggled out from behind the Iron Curtain and back to Blighty to spill the secrets that were being bartered for their liberty.

"Not our concern, soldier."

"What do you mean? Look out there. London needs to know what's going on."

"Absolutely. Couldn't agree more, old bean, but we're not the ones to tell them. Every communication we make increases the risk of discovery. If we blow our cover we put our people on the ground at risk. It's got to go through the right channels. There are plenty of people feeding information to Control. We stay schtum. Heads down. Don't risk bringing any attention on our people."

Charles knew that he was right. He inclined his head slightly, admitting it. The Irishman was passionate in his beliefs, and he held a lot of them. Somehow, though he was capable of detaching himself from any situation and looking at it dispassionately. His world was all about results. He got the results London wanted. That made him a valuable piece on the board. Charles didn't agree with his partner's politics, but that didn't mean he wasn't about to learn everything he possibly could from the man, or that he didn't trust him with his life. He did. He absolutely had to. Out here, he was the only thing he could count on.

"She has to," Paddy said. "Simple as that. If we don't get her out there's no knowing how long she will be trapped here, then it's only a matter of time before someone blows the whistle on her. The clock's already ticking."

"How long do you think we should give her?"

"Meaning until we get pulled?"

"I'm not leaving her behind, Charley. I like you, kid, but here's the deal, I've seen too many people cut adrift and left to sink or swim. I'm not like that. Greta deserves better than that. She deserves a couple of heroes."

For one thing, he was scared.

That was what this was all about. Or who. Paddy had been even more erratic than usual for the last three days while they had been holed up in the abandoned house eating tinned meat and dried biscuits washed down with water they had to fetch from a standpipe in the middle of the night. They had been saving three bottles of beer until she came so they could celebrate their last day in this hellhole together. Not that Charles thought they'd ever get to drink them; the mission had a hoodoo sign hanging over it. He could sense it. Long after they were gone those three bottles of beer would be left standing on the shelf gathering dust.

"We might have to," Charles said, fearing the response he might get but knowing that it had to be said. Paddy had to start to face up the possibility that she was not coming. That she might not even be alive. It was the risk that they all took and the fact that she was a woman made no difference at all. If anything it made it worse.

"You think this is just a show of strength? Moscow flexing her muscles?" Paddy said, moving to one side to allow Charles to take a better look at the lie of the land.

"Not a chance. The Great Bear might like the world to think that they have come to keep the peace, to protect the security of their territories, but this has nothing to do with peace, it's expansionism pure and simple. This is as much about conquest as Hitler's plans were. Instead of the Third Reich we are witnessing the aggressive and all pervading spread of communism."

"You know what that sounds like to me, Charley? British colonialism," Paddy jibed, seizing the opportunity to give another dig about the way people were still being treated in his homeland all these years after Oliver Cromwell.

Charles ignored it as he always did. It was part of the game. There was no point in taking the bait. It was an argument he could never win. "The difference between the Russians and the Nazis is that no-one is going to stand up to them. Look at the world we're living in, Paddy. Every country has lost a generation of men and far more besides. They're still rebuilding their homelands and their lives. It leaves countries like this vulnerable and unprotected."

"And that's where we come in."

"We can't be the world's police, though. It just doesn't work."

"As long as it works for Greta. We owe her."

Charles knew that he was right; they did owe her. A lot. She had provided so much intelligence, vital intel, her body on the line every day as she tried to get what was needed. He harboured no illusions. He knew exactly how she got her information. She was beautiful. She used that as a weapon, targeting some high-ranking officials, seducing them and interrogating them in pillow talk. He would never have said it aloud though. That was the problem with being in love with someone.

They both loved her. That was another wrinkle to the rescue. Both men had fallen for her unique charms, and that meant they'd take too many risks to get her out, put each other in compromised situations if there was a chance it would help her. But that was something else that neither would admit. So they focussed on getting her safe, knowing there would be fallout if they ever got back to Britain.

Someone peeled away from the shadows and started running.

There had been no warning.

Charles watched in horror as a single shot punched into the man's back and he saw him go down. There had been a moment as body fell to the ground when his gut had clenched, sure that it wasn't a man at all, but a woman. Greta.

But it could have been.

If she was out there, he willed her to stay put.

Neither of them spoke as they watched a soldier walk towards the fallen man, injured but still alive. The soldier drew a pistol from his holster and fired two more bullets that made the body dance on the ground before there was silence.

The execution was more posturing, just like the tanks.

He doubted the soldiers would fire another shot in anger for a while, as long as no-one posed a threat. They'd laid down their marker. How long that would last was open to question. What was certain was that the Russians wouldn't waste time asking any.

"As long as they are out there she's not going to be able to come in from the cold."

"We have to try to get a message to her."

Though how they could do that if she didn't want to be found was up for debate. There was a network of people down there, spread throughout the city, all carefully cultivated, loyalties bought and paid for, prepared to pass messages from one to another; people who could be trusted, people like Greta who put their lives at risk for the country they loved. And now that the Russians were no longer just on the doorstep but very much inside the borders, the risks their resistance carried were so much greater. Could they still be trusted? Would they betray the British to new paymasters? What if a link in the chain broke? What if they were compromised? None of them knew more than the person who contacted them and the one they passed information on to, but if there was a break in the chain there were links that could eventually lead back to them.

"Then one of us needs to go outside." Paddy said.

"It's going to be hard to move around in daylight." Charles looked out at the body lying in the street. A pool of dark blood had spread out around him.

"Problem is it's now or never if we are going to make something happen. The alternative is we sit tight and wait. Is that what you want to do?"

"No," he admitted, waiting would be unbearable.