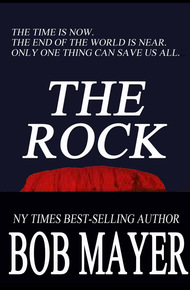 Bob Mayer is a NY Times Bestselling author, graduate of West Point, former Green Beret and the feeder of two Yellow Labs, most famously Cool Gus. He's had over 70 books published including the #1 series Time Patrol, The Green Berets, Area 51, and Atlantis. He is the CEO of Cool Gus Publishing. Born in the Bronx, having travelled the world (usually not tourist spots), he now lives peacefully with his wife (who also collaborates with him), and said labs. www.bobmayer.com and www.coolgus.com

The Rock by Bob Mayer

In Australia...a U.S. Air Force computer operator receives a terrifying radio transmission out of Ayers Rock that knocks out the world's communications.

In New York...a tall, slender woman leaves her husband a note on the refrigerator saying that she's leaving — but can't tell him where she's going.

In Colombia...a Special Forces officer breaks into a drug kinpin's bedroom and puts a bullet into a woman's brain before running to a waiting helicopter.

And in England...a beautiful twenty-three-year-old mathematician prepares for a journey that will change her life forever.

The team assembles in Australia on a mission that can save the world. But first, they must figure out who is the message coming from? What are they trying to tell mankind? And can it be deciphered in time before Armageddon overtakes the world?

It's about a bomb, it's about a world about to be shattered. It's about the last few days they have to save us all.

I've been doing a lot of my own time traveling when putting this bundle together. I first met Bob Mayer in 2001 when we were both guest authors at the Black Hills Writers Conference in Rapid City, South Dakota. And we ended up staying longer then we liked when the city got hammered with a terrible blizzard and prevented anybody from going home. Bob and I have not crossed paths frequently, but he's also been active in other storybundle collections, and he just happened to have a nice time travel novel… – Kevin J. Anderson

The chamber contained enough energy to destroy the planet five times over. More than two kilometers in diameter, one kilometer from floor to ceiling, and three times that depth under the planet's surface, it echoed with the crackle of directed power beams, all focused on a black sphere dancing in the center, just above the metal floor. The sphere was fifty meters in diameter and did not appear to be made of any solid substance, but rather contracted and expanded in a rhythmic pattern.

Halfway up the far wall, a half-kilometer from the sphere, a recessed window slid open, revealing a control room lined with consoles. Three figures dressed in long black flowing robes stood. Wires flowed from the back of the hoods to the glowing screen in front of them on which the thoughts each wished to express were displayed in a manner all could understand. "It is time for run four-five," the figure on the left communicated.

"Proceed," the one in the center ordered.

The power beams shifted across the color spectrum as the levels were increased. The sphere slowly began to change its own shade, the pitch-black gradually changing to gray then fading away until an image appeared, incongruous among the technology and power of the cave: an aircraft hangar, the edges abruptly cut off where they met the edge of the power of the sphere. Inside the hangar, an old man in a military style uniform waited patiently.

"What is the location?" The figure in the center asked.

"Coordinates two-three-five-eight dash four-eight-three-four. A town called Leesburg, in the state of Virginia, in the country called United States."

A military truck suddenly appeared in the sphere, bumper first, the entire vehicle filling out as it entered the power frame. A man jumped off the truck, wearing unmarked black fatigues and carrying a weapon. He greeted the general with a handshake. "It's good to be back, sir."

The general slapped him on the shoulder. "Good to have you back, Captain Hawkins. I've got the transcript of your in-flight debriefing and the President is very satisfied with the results of your mission."

The man nodded wearily and watched as his three men threw their rucksacks onto the floor of the hangar and secured their weapons with the unit armorer. "I'd like to give the men some time off, sir."

The general nodded. "Take a week and then give me a call. I'll put Richman's team on standby alert."

"Damn good job, man." With a slap on the back the general was gone, walking out of the range the sphere could see. The captain gave his men the good news and the figures dispersed one by one until only he was left standing there. He finally moved out himself, heading toward the hangar door that glimmered in the light of the sphere.