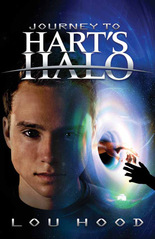 Lou Hood is a mother, a military wife, and a science and technology buff. She lives in Ottawa with her husband and daughter.

Journey to Hart's Halo is a near-future fantasy adventure, set in 2033 on the world's first international space colony.

The project of eccentric technology billionaire Dr. Oliver Hart, Hart’s Halo is about to be populated by Zero Colony. Space-crazy twelve year old Davey Randolph’s dream is to win two of the twelve spots, for him and his mom, in a global lottery to spend five years aboard the Halo.

Constructed as a puzzle-propelled mystery, Davey needs the help of an international cast of clever and quirky pre-teens, and to conquer his own feelings of being an outsider, to solve the puzzles that will lead to a shocking discovery about the true fate of his missing father.

With new quantum physics from The Perimeter Institute for Theoretical Physics, futuristic technology, and space travel and habitation, it is a modern myth of epic scale.

“If we have learned one thing from the history of invention and discovery, it is that, in the long run - and often in the short one - the most daring prophecies seem laughably conservative.”


The buzz of energy charging the air can mean only one thing: He is in the building.

A supercharged energy surrounds his movement through the lobby and corridors, enrobing him like a cloud, foretelling his arrival.

The buzz precedes his actual arrival by a good ten minutes, so that by the time the elevator opens on the 65th floor of the ultra-modern steel and glass tower, the excitement in the air is almost palpable.

Even though every individual in the company has many reminders each day that they work for him: his name on the building, on their stationery and business cards, on their computer desktops. Still, like static electricity, his physical presence startles.

But only those lucky enough to occupy workstations close to the aisle will catch a brief glimpse. The more bold among them will just happen to be walking the hallways, en route to the water cooler or restrooms, mysteriously having chosen that minute to find themselves in his expected path. This in spite of the fact that for days memos have been circulating, reminding them that he finds excessive attention uncomfortable. And asking that they please be sure not to gawk, gape or otherwise show unwanted interest in his presence.

Inside the plush, high-tech boardroom, an assortment of influential people gather impatiently around the enormous chrome and smoked-glass table. They are awaiting the arrival of their Chairman and CEO.

He is both feared and revered by the members of his board. But none will argue that his visionary thinking has changed the world, while making them all extremely wealthy in the process. They have assembled at his request. A hush falls over the room when he appears at the doorway.

“Good morning, ladies and gentlemen,” he says softly, his voice a throaty whisper. “I thank you for rearranging your schedules to accommodate this meeting. I know how incredibly busy you all are.”

He is mindful that all eyes, and ears, are on him as he rolls through the doorway.

An icon of minimalism, his simple black-on-black attire has the effect of rendering him as one with the mass of gleaming black leather and steel technology that supports him. Slowly, he raises his gyroscopically balanced IBOT wheelchair up onto its rear wheels. This puts him at eye-level with the two aides who stand beside him, and has him towering over the board members seated around the table. The effect is daunting.

He wheels over to enormous twin plasma screens at the head of the boardroom and, with the limited use he has of his hands, awkwardly uses his remote to dim the lights, shut the automated blinds, turn off the soothing background music. Complete silence, disrupted only by an occasional uncomfortable throat-clearing as his audience awaits his first words.

“Hart’s Halo,” he says. Nothing more. The echo of his words lingers in the air, tingling like an electrical charge.

With an odd flourish of his remote, Hart launches his multimedia slideshow on the plasma screens. A breathtaking panorama of modern civilization.

His voice, like gravel in a silk purse, transcends the images as he begins his narration: “Thirty years ago, color television had only recently become the standard in every home. Thirty years ago, we were still celebrating having recently put a man on the moon. Today, we have a private sector space program in the becoming stages. Companies like ours will very soon send a privately-built, manned craft into outer space. Today, the Europeans put SMART-1 into lunar orbit, and you know what that means. They find water and moon colonization’s next.”

Hart pauses to allow his words to sink in.

He turns his chair to more directly face his audience, enthusiastic and animated. “Paul Allen… Richard Branson… Bill Gates. Steve Jobs. Men of vision. Of energy. Consider the change their vision has wrought these last few years. Just these last few! And imagine how impossible their achievements would have seemed, say, thirty years ago?” Another pause.

The surround sound emits a luscious, percussive boom, signaling the reshaping of the tone of Hart’s presentation.

“We’ve gone from requiring a warehouse of tape-drive systems to store what can now be held on this.” He holds up a tiny flash disk. “Everything we take for granted: splitting the atom, fax technology, global positioning systems, satellite communications… thirty years ago, if you’d tried telling someone about the world we live in today it would sound to them like science fiction. Witchcraft, even.” A thin line of white spittle stretched between his lips as he spoke.

“Wireless technology…the Internet… for God’s sake, the Internet ladies and gentlemen! Only officially an adolescent today…ten measly years ago you’d never heard of such a thing. Probably couldn’t have conceived of how you’d use it. Now I’ll bet you couldn’t imagine functioning without it. Could you?”

“Need I go on? Can you not sit there and think back to when you were young, and shake your heads at what a different world it is today?”

Hart’s eyes sweep the room, landing on one board member after the next, making grilling eye contact with each; holding it long enough that many of them have to look away or check their watches or notebooks just to break the intensity of his gaze.

“Oh, I know what you’re thinking. It’s a long way from the Internet to a space project with a thirty-year horizon. And, of course, yes, it is.”

In this very instant, each member of the board has two words searing into their minds. This is how Hart operates. They are used to it. Two deeply significant words, dropped just as casually as that. Space Project. At least now they know this much about what they are getting into.

“I know I need not remind you how society has already committed itself to large, open-ended and highly speculative investments… fusion power technology… the atomic bomb. Granted, these were funded by governments. But, the fact is, HART Corporation has more money than many of today’s world governments.”

The screen goes black, and all is dark and silent.

Each and every member of that board is quietly wondering, maybe even dreading, what will come next. Knowing it will be big. Bigger than big, in fact, knowing Oliver Hart as they do.

Not that it matters much. See, this is not a sales pitch. This is a done deal.

Hart’s board members are on the edges of their seats with anticipation, while simultaneously scared to death that his vision has finally reached its limits. That Hart’s own personal agenda is going to lead them down a path whose financial commitments are so unimaginably huge, they might spell the unmaking of the corporation they are charged to protect. A thirty-year project? Well, societies have been remade in a span of thirty years.

Suddenly, the darkness is dramatically cut when Hart projects onto the screen the image of a strange object. 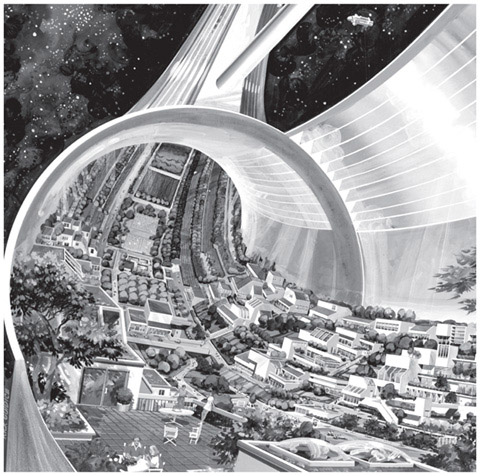 The screen is filled by an artist’s rendering in luscious pinks, yellows and oranges. It is part of a ring. Its starry, galactic setting clearly suggests that it exists somewhere in outer space. Hugging the outer perimeter of the transparent ring is a low-rise suburban cityscape. Houses, trees, pathways…people!

Hart clears his throat, and focuses his thoughts as he begins to brief his board of directors on his new vision. A vision that will, over the next thirty years, see him establishing an international consortium to construct and realize.

“This, ladies and gentlemen,” he begins, with a surprising lack of flourish, “is Hart’s Halo. The world’s first space colony.”

"The idea that anything is possible, that’s one of the reasons why I’m a fan of America. It’s like… hey, there’s a moon up there! Let’s take a walk on it! Bring back a piece of it! That’s the kind of America that I’m a fan of."

- U2 front man, rock legend and unflinching humanitarian 2004 Commencement address at the University of Pennsylvania, where he was being presented with an honorary doctorate degree


Davey hits the pavement, and clicks on the power on his skates. Swoosh: He’s really moving now. Past row upon cookie-cutter row of houses just like his best friend Kyle’s. Up ahead, at the fork in the road, a monstrous electronic 3D billboard fills the sky. An image of the Halo. Of Dr. Hart. Images so familiar that Davey could close his eyes and recreate them in stunning detail in his mind’s eye. Underneath the images, a headline reads:

And in the bottom corner of the 3D billboard there’s a ticker box. It’s been counting down for hundreds of days. There are only 12 minutes left on the clock. Next to the ticker, a sign that reads:

Davey pulls up under the sign, and stares at it like he has hundreds of times before. He has that same dreamy, hypnotic look all kids with Halotosis seem to fall into when thinking about their beloved Halo. But nobody, not a soul, could possibly love the Halo like he does. Of that much Davey is sure. A shock wave runs up his spine, the tingle leaving him feeling weak and light-headed. He slides down to one knee in order to regain his balance. Then onto both knees. He has this creepy, disembodied feeling and runs a hand back and forth through his bristly blond hair, hoping that it might stop his scalp from crawling and maybe even wake him up to feeling back inside his body again.

A head and shoulders of Hart, set against the backdrop of the Halo’s majestic likeness. Flesh and bone, carbon and water man, creator of a carbon nanofiber world.

In Davey’s anxious eyes, dark irises reflect the image of Hart: his hero. On his lips, mumbled words beseech this entreaty: “Take me with you… please, dear God, take me with you.”