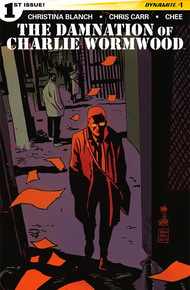 The Damnation of Charlie Wormwood #1-5 by Christina Blanch, Chris Carr and Chee

#1: How far will a man go to save his son? Charlie Wormwood has a pretty normal life - a house, a wife, a job, and a kid. With his son sick, he begins treading a dangerous path to make things right. Teaching in prison gives him many "opportunities" but what problems will he create as he walks into the prison of darkness for his family?

#2: Charlie's life is falling apart. He seems to be losing more than just his son as he and his wife struggle with Juniors illness. But will help come from an unexpected "friend"? And can Charlie face the demons that come along with the decisions that he is making?

#3: Charlie seems to have his home life under control. However, he gets an offer than he can't refuse. Or can he? But did the teacher learn enough from the student to complete the assignment? If he fails this assignment, the consequences could be fatal.

#4: With Charlie seemingly completing his first deal, things seem to be going more smoothly in his personal life. However, tensions are high at the prison and Charlie learns the hard way what it's like to have real enemies in the big house. And when his main protector is locked away, will he have learned enough to survive on his own?

#5: FINAL ISSUE! There's been a death at the prison which brings Charlie's plans to make money to a standstill. And depending on who it is, he may have even more problems. But when Liz confesses her troubles to Charlie, it manages to take his mind off his issues for a while and brings them closer together. But how will Charlie's wife handle their new relationship? This issue brings the first story arc to a close.