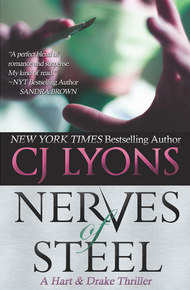 Nerves of Steel by CJ Lyons

Dr. Cassandra Hart is fighting a war. And losing.

A deadly drug epidemic, a killer stalking her hospital...meet the ER doctor who never gives up.

Cassie's Pittsburgh ER has been deluged by young patients who have overdosed on a new drug, FX. After Cassie discovers that the source of the FX on the streets is her own hospital, her best friend is killed, and Cassie's life is threatened. She is forced to place her trust in Detective Mickey Drake.

Drake's irascible charm eventually penetrates the barriers Cassie has built around herself, and their relationship progresses from professional to passionate. After Cassie discovers the truth behind the thefts, she and Drake must confront a killer. In the end, their only weapons are their new found love and the courage that it gives them.

The Sikorsky helicopter thundered through the icy February night, its blades chopping against wind gusting off the Ohio River. In the rear-facing passenger seat, Dr. Cassandra Hart swallowed hard to keep down the chilimac she'd eaten earlier. Wishing it was only motion sickness, she tugged at her safety harness. There was no room to breathe, not enough air.

Motion sickness she knew how to fix. Irrational claustrophobia was another story. A curse, a weakness she refused to reveal, forcing her to mask her panic.

The view outside Cassie's window wasn't helping. The helicopter's blades tore into the low-hanging clouds, shredding them into tattered, ghostly remnants. Rain pelted the scarred Lexan windows, ricocheting like shrapnel.

Typical of Pittsburgh, a city constantly teetering on the edge of bankruptcy, few of the buildings they passed were lit. The ones that were, such as the Cathedral of Learning and PPG Place, stood like sentries in the dark, guarding against a pre-dawn invasion.

She bit down against another wave of nausea, her pulse drumming through her ears in time with the rotor blades. Across from her, Eddie Marcone, her flight paramedic, lounged in his seat, playing a hand-held computer game, oblivious to her distress and their impending doom.

A blast of wind catapulted the Sikorsky skyward. Cassie's restraints tightened against the sudden motion, squeezing against her chest. Gravity yanked them back down with a jolt strong enough to snap her jaws together.

"Weather's moving in fast," Zack Allan, their pilot, said. His voice reverberated through her headset. "Might have to turn back, doc."

Turn back? Cassie rubbed her clammy palms on the legs of her Nomex flight suit. Right now the landing pad at Pittsburgh's Three Rivers Medical Center seemed like a distant Nirvana. A Nirvana that would have to wait. The patient they were flying to retrieve, a girl found in the frigid waters of the Ohio River, couldn't.

"Ten minutes," she told Zack, denying the fight or flight instinct raging through her, every muscle quivering with the desire to escape. "We'll scoop and run, just give me ten minutes."

The Sikorsky bucked again. "They can send her by ground," Eddie said, his glare reminding her that her decision affected all of them, not only her patient.

"It'll take too long. This girl doesn't have that kind of time."

That was the problem with living in a city built around three rivers and several mountains. Tunnels, bridges and roadwork conspired against the rapid transport of trauma victims.

Zack's sigh resonated through her headset and she knew she'd won. Hah. If you could call being locked inside this flying death trap winning.

"You've got five minutes," he said.

They flew lower. The turbulence decreased from head-swimming, stomach-flipping to mere filling-rattling. The Sikorsky shuddered then landed on the last intact slice of macadam remaining at the on-ramp of the West End Bridge. Rotor wash overturned several orange PennDOT barrels, sending them skittering across the broken asphalt. Sleet pounded the helicopter. Cassie didn't need to look; she knew Zack was scowling.

"Hey, Hart," he shouted over the rumble of the engine, "one second late and I swear—"