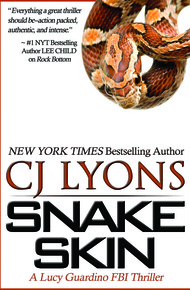 Until the day she comes up against a predator more vicious and cunning than any she's ever tackled before, one who forces Lucy to choose between the life of the young victim she is fighting to save and her own daughter's....and Lucy's dream life is shattered.

She stroked the tip of her thumbnail against her tongue, testing. Not sharp enough. Yet.

Nibbling the edge, enjoying the crunch of keratin against enamel, Ashley propped both elbows on the table and hunched forward. Other than the old guy behind the counter giving her an oogly-woogly pervert stare, the Tastee Treet was empty.

It was your typical hotdog shack. Cracked vinyl booths crowded the dining area, waiting to be filled by squealing cheerleaders and boasting football players after Friday night football games. A fifties-style melamine radio behind the counter warbled some tune older than even Ashley's parents, something about fast cars and fast boys and the dangers of loving them, punctuated by the sizzle and pop of the fryer.

No sign of Bobby. She couldn't help but glance behind her, out to the gravel parking lot, even though she knew she'd hear his car easily through the Plexiglas windows and plywood walls. Her stomach knotted with anticipation—he was so handsome, and God, those eyes, they saw right into her soul—would he like her once they finally met in person? Would he be disappointed? Think she was too young? Too immature? Worry gnawed at her as she raised a finger to her mouth. No. She'd outgrown that nasty habit. There wasn't room in her life for any of that. Not once she and Bobby made their escape.

She glanced at her watch before removing it, then slid it over the top of the chrome and glass pepper shaker. The last vestige of her past, it had served her well. Despite taking three buses and walking half a mile, she was still ten minutes early.

Each leg of the journey had left her feeling buoyant, discarding bits and pieces of herself the way her father's beloved creepy snakes shed their skin. As if her old life was made up of fourteen years’ worth of flaky, parchment-thin memories that she'd out-grown and left behind to crumble into dust and blow away.

"Did you want to order anything, miss?" the counter guy asked, startling her. His face was shadowed by a Steelers ball cap pulled low. She'd felt his stare ever since she entered.

The grease-laden aroma of French fries and burgers perfumed the air, making her stomach growl. She ignored it. It was important to stay in control. "No. I'm just waiting for someone."

Control. She adjusted the watch, centering it exactly, brushing stray pepper grains away, trying to deny her flutter of anxiety. And failing.

Abandoning the watch, she spread her palms flat on the table top, her breath coming in fast, sharp gasps. What if Bobby thought she was ugly? What if he didn't like her? What if...

She turned her left hand palm up, slashing her thumbnail against the bare skin of her wrist.

Ahhh... Relief sighed through her at the sight of the red welt, the tiny beads of crimson, the oh-so straight and precise line.

Staring at her blood, she was able to breathe again.

Her tongue slid between her teeth and lips as the urge to taste the blood became overwhelming. Just this once. She would quit after she and Bobby were together. Promise.

Flexing her wrist, she forced another small dot of crimson to the surface. So shiny, so wet.

She held her wrist perfectly steady, denying the tremors vibrating beneath her skin, a current of palpable electricity. Her stomach tensed with anticipation as each beat of her heart made the red blossoms shudder.

Not yet...not yet. She was in control. Ashley raised her eyes. The geezer at the counter still stared at her. Fuckwad. He had to be as old as her father. Double fuckwad. She sharpened her gaze into a deadly glare. He flinched, looked away. Lech. Bobby should be here any moment. Escape was almost at hand. She'd been such a good girl, waiting, controlling her impulse to cut and run.

She carefully rolled her sleeve back, exposing the other trophies her control had won. Each scar a triumph. Each scar a time she hadn't run screaming out into the night or thrown herself in front of a bus or jumped from a bridge.

Each scar reminding her that she could win, that she mattered, that somewhere inside this cold, numb husk, she was alive.

Raising her wrist, she slowly, with gentle flicks, not wasting a drop, licked the blood. Still warm, so salty as it slipped across her tongue, down her throat.

Sometimes, she felt like she was floating outside her body, searching for another life. Cutting helped her reconnect, grounding her, even if she did always find herself right back where she started. Same old body, same old life.

"Excuse me, miss?" It was the scuzzy counter guy, leaning over her, bending much too close as he reached for the napkin dispenser.

Ashley tried to pull away but he had her pinned against the side of the booth. His arm brushed the back of her neck, caressing her hair. Pervert.

"Hey, back off!" Something sharp jabbed her neck. "What the—"

Disappointment trumped her fear for one impossibly long instant. She'd never get to see Bobby…. then the ramifications of that fleeting thought flash-froze her with terror.

"Don't be afraid," he said, sliding down to sit beside her, his arm wrapping her in an embrace impossible to escape. Not with her entire body turning to melted jello, soft and mushy, and swimming away from her.

It took a few seconds for his words to penetrate as she tried to speak and failed, the only thing emerging a trail of drool. She slumped against him, her head lolling to one side, the taste of blood lingering, fresh on her tongue. Bobby, where was Bobby?

"Don't worry, Ashley," he said as her vision danced with kaleidoscope colors. "I'm here to save you."