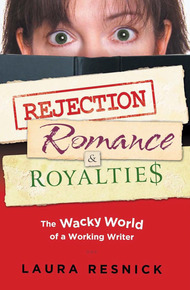 Laura Resnick is the author of the popular Esther Diamond urban fantasy series, whose most recent release, Abracadaver, is the seventh volume. She has also written traditional fantasy novels such as In Legend Born, The Destroyer Goddess, and The White Dragon, which made multiple "Year's Best" lists. She began her career as the award-winning author of fifteen romance novels, written under the pseudonym Laura Leone. An opinion columnist, frequent public speaker, and the Campbell Award-winning author of many short stories, she is on the Web at LauraResnick.com.

A working writer for more than twenty years, award-winning author Laura Resnick has written the wacky, stark, insane, improbable truth about the working life of a novelist. Often ironic and always hilarious, the volume voices the daily despair and rewards of the fiction writer's life for anyone who imagines they want to write or who wonders what the professional writing life is really like. These are the real life adventures of a novelist staying sane despite what her profession inflicts on her. And she lived to tell the tale!

Laura Resnick's fiction has won awards in several genres, under more than one pen name. She is a second-generation freelance writer. Her father is also a well known fiction writer, and she has spent her entire life (I mean entire) around writing, writers, and the publishing industry.

Nothing can match that experience. And Laura writes about all of it with grace and humor. This book is funny, yes, but it's also true. And I believe that it's a book every single writer needs to read. – Kristine Kathryn Rusch

The late Trish Jensen, while writing under the pseudonym Trish Graves, sold a publisher a romance novel called Just This Once in which the hero, among other things, mentors a teenage boy, steering him away from street gangs and towards organized sports. So you may imagine the author's shock when, upon reading her page proofs, she discovered that the editor had changed the boy into a raccoon.

(I think I speak for everyone here when I say, "What?")

When Jensen asked her editor why on earth she had rewritten a teenager as a small nocturnal carnivore, the editor replied that the hero's mentoring the boy could be misconstrued as having undertones of pedophilia. (All together now: "Huh?") So the obvious solution was to rewrite the kid as an animal.

I am not making this up.

The lesson here is that when you allow an editor absolute control over your work, as that publisher's contract stipulated, the results can be worse than your wildest nightmares. Jensen made sure her next contract with that house didn't have that clause, and she warned other writers contracted there about it, too. She was wryly philosophical about the experience in later years, saying, "Now I'm known as 'the raccoon author.'"

As for the publisher, that imprint no longer exists. It folded within a few years of the raccoon episode. A rare example of things turning out as they should in the publishing industry.