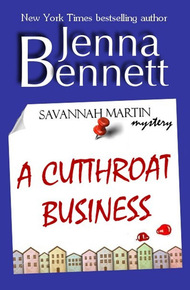 Jenna Bennett is the USA Today bestselling author of the Cutthroat Business mysteries, as well as the author of award-winning science fiction romance for Entangled Publishing. As Jennie Bentley, she writes the New York Times bestselling Do It Yourself home renovation mysteries for Berkley Prime Crime. A former Realtor and home renovator – as well as a former actress, waitress, receptionist, tour guide, translator, bed and breakfast reservationist, stewardess, and bank teller – she lives in Nashville with a husband and two children, a hyper-active dog, a goldfish, and an African dwarf frog.

A Cutthroat Business by Jenna Bennett

Everyone has warned new-minted realtor Savannah Martin that real estate is a cutthroat business. But Savannah doesn’t think she’s supposed to take the warning literally ... until an early morning phone call sends her to an empty house on the ‘bad’ side of town, where she finds herself standing over the butchered body of a competitor, face to face with the boy her mother always warned her about.

Rafe Collier is six feet three inches of testosterone and trouble; tall, dark, and dangerous, with a murky past and no future--not the kind of guy a perfect Southern Belle should want to tangle with. In any way. But wherever Savannah turns, there he is, and making no bones about what he wants from her.

Now Savannah must figure out who killed real estate queen Brenda Puckett, make a success of her new career, and avoid getting killed – or kissed – by Rafe, all before the money in her savings account runs out and she has to go back to selling make-up at the mall.

Forewarned is forearmed, they say, and in justice to — well, everyone! — I guess I must admit that I was forewarned. It’s just that when people told me that real estate is a cutthroat business, I didn’t think they meant it literally.

My name is Savannah Martin, and I sell houses. Or I should say that I try, because I’m brand new at my job, and truth be told, haven’t sold so much as a lean-to yet. I should have realized, when the call came in about 101 Potsdam Street, that it was too good to be true.

It was about 8:45 in the morning on the first Saturday in August, and I was at work. As usual. For the past six weeks I’d been on call pretty much 24/7 — not exactly what I’d had in mind when I looked forward to setting my own hours — and I haunted the office like the proverbial ghoul.

I guess I should also mention that I didn’t actually have anything else to do. I used to work at the make-up counter at the mall, but when I got my real estate license, I quit my job and started living off my savings in the hope that my dwindling bank balance would give me the incentive I needed to succeed. So far it hadn’t worked, and if something didn’t change soon, I’d have to crawl to Dillard’s to beg for my old job back. If it was still available, with the way the economy was going these days. But that was why, when the phone rang, I snatched it up on the very first ring, and had to take a couple of steadying breaths before I put the receiver to my ear.

“Good morning. Thank you for calling Walker Lamont Realty. Savannah Martin speaking. How may I help you?”

I waited for him to comment, but instead he just continued chummily, like we were old friends, “See, Savannah, it’s like this. I was supposed to be meeting Miz Puckett at eight, to see 101 Potsdam Street, but I’ve sat here for 45 minutes, and I ain’t seen hide or hair of her.”

“I haven’t seen her this morning, either,” I answered, my heart starting to beat faster. Someone was interested in buying 101 Potsdam? And my colleague and competitor Brenda Puckett had dropped the ball...? “Though it isn’t like her to be late.” Much more like her to be early, so she could feel superior when you merely showed up on time. “Are you able to wait while I try to call her?”

My caller said he was, and I put him on hold before dialing Brenda’s cell phone, and when there was no answer, her home number. There was no answer there either. I got back on the line. “Sir? I’m sorry, I can’t get in touch with her. But if... that is... I mean...”

My tongue tripped over itself in its eagerness to offer help. The caller didn’t say anything, but I could sense amusement through the line. I gritted my teeth and tried again. “If you’d still like to see the house, I’d be happy to come out and open the door for you...?”

I held my breath. The Italianate Victorian and surrounding two acres were listed for almost a quarter million USD, a fairly high price for Nashville, Tennessee. The commission would pay my rent and keep me in gasoline and Ramen noodles for the rest of the year, at least.

“You sure you can spare the time, darlin’?” The voice was a baritone, husky and low, with a hint of velvety roughness that made him sound like he’d just rolled out of bed.

I assured him, with all the sincerity I could muster, that there was nothing I’d rather do than be of service to him. He chuckled, but didn’t comment. Even so, the ripeness of the chuckle brought a blush to my cheeks. I ignored it, promising him I’d be there in fifteen minutes, and then I wasted the first thirty seconds of that time doing a (premature) victory dance before I grabbed my purse and headed out the door. If I was going to get from the office to Potsdam Street in the fourteen and a half minutes left to me, I would have to get my tail in gear and keep my foot glued to the gas pedal the whole way.

This may be a good time to explain about Brenda Puckett, the Wicked Witch of the South, or, as she prefers to think of herself, the Empress of Everything. She’s a short, plump woman with big hair and a bigger ego, approximately fifteen years older than me and at least fifty pounds heavier. And she has disliked me from the moment she first set eyes on me. Could be because I’m younger and thinner — though certainly no reed; it doesn’t take that much to be thinner than Brenda — or could be because my blonde hair is my own and didn’t come out of a bottle, the way Brenda’s did. Or maybe I just wasn’t deferential enough the first time I met her. Through no fault of my own, I assure you. How was I supposed to guess that the dumpy, middle-aged woman in the ill-fitting blouse, padding around the front office in her stocking-feet, wasn’t the cleaning lady, but one of the most successful realtors in Nashville? She sure didn’t look it. But she wasted no time in correcting my mistake, in terms that could have curled my hair had it not already had some curl of its own, and she still held it against me six weeks later. The thought of being able to put one over on her made me feel all warm and fuzzy inside as I skidded around the corner of Potsdam Street, narrowly avoiding a head-on collision with a souped-up green Dodge, and gunned the car up the street.

It took me four minutes longer than the fifteen I had promised before I could pull my pale-blue Volvo — the safest car on the road — to a stop behind the sleek, black Harley-Davidson waiting in the circular driveway. The man straddling the seat matched the motorcycle: dark, muscular, and more than a little dangerous. The T-shirt might as well have been painted on for all that it left to the imagination, and the tattoo peeking from under the left sleeve looked like the tail end of a viper curled around his bicep.

I hesitated before I opened the car door. Real estate can be a scary business on occasion. Those of us who are involved in it advertise our faces and phone numbers all over town, then agree to meet total strangers who call, claiming to want to see an empty house somewhere. Often in an area that isn’t the best, like the one I found myself in now. Sometimes — rarely, but it happens — one of us gets attacked. And there was something about this man that suggested that I ought to step carefully. So I did, both because it seemed prudent and because the gravel was difficult to navigate on three inch heels. “Sorry I’m late. I’m Savannah Martin...”

And then I stopped — dead, if you’ll pardon the pun — when he removed the mirrored sunglasses and I met his eyes.

They were as dark as those on a Jersey cow, and surrounded by long, thick, curving eyelashes. There’s nothing wrong with my lashes — nothing a liberal application of make-up can’t correct, at any rate — but I would have sold my soul to possess his. He could hawk mascara for Maybelline with those lashes. Not that that was the reason I was staring.

“Struck speechless by my good looks, darlin’?” His voice was amused.

“Sorry,” I managed, fighting back a blush. How mortifying, to be caught staring! “For a second there you looked familiar, but...”

“You ain’t never forgotten me?” He grinned. White teeth flashed against golden skin, and a ghostly memory stirred, like an alligator in a swamp, but it subsided without breaking the surface.

When a few seconds passed while I didn’t say anything else, he added, “Been back to Sweetwater lately?”

So he was from back home. Well, it made sense. The drawl, slow as molasses, was pure South, and he wasn’t someone I had met recently, or I would have remembered.

“A few weeks ago,” I said slowly, running mental mug shots past my inner eye. “You?”

“That’d be telling.” Another grin curved his lips and the alligator stirred again. I concentrated, and almost had it, but just as I was about to reach out and grasp it, it slipped through my fingers once more.

“You couldn’t give me a hint, could you?”

I smiled hopefully. He contemplated me in silence for a few seconds before he said accommodatingly, “Sure. Columbia High.”

I nodded. Of course. He was someone I had gone to high school with. That explained it. Long enough ago that I wouldn’t necessarily remember him right off; not so long ago that I had forgotten entirely. But there had been hundreds of students in my high school, from all over Maury County and beyond. How in the world did he expect me to recognize him after all this time...?

And then the brick dropped, or the alligator reared, or whatever. I jumped back. “Oh, my God! Rafael Collier. You’re...”

“Guilty as charged.” He made a little mocking half-bow. His voice was pleasant, but his eyes were anything but. They had turned as black as the motorcycle he’d been riding, and approximately twice as hard. I swallowed and opened my mouth. And put my foot in it.

“I thought you went to prison.”

He lifted an eyebrow. Just one; the other didn’t move so much as a fraction of an inch. “That was twelve years ago, darlin’. I got out.”

Obviously. I swallowed again and took another step back.