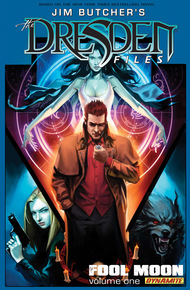 FOOL MOON VOL. 1: When the supernatural world spins out of control, when the police can't handle what goes bump in the night, when monsters come screaming out of nightmares and into the mean streets, there's just one man to call: Harry Dresden, the only professional wizard in the Chicago phone book. A police consultant and private investigator, Dresden has to walk the dangerous line between the world of night and the light of day. Harry Dresden`s life is a mess. His top client (and close friend), Lt. Karrin Murphy, no longer trusts him. Chicago`s underworld and the cops alike think he's mobster Johnny Marcone's supernatural enforcer. And the enigmatic White Council continues to view him with suspicion. If all that weren't enough, a pack of werewolves have unleashed a wave of terror on the Windy City. But as is always the case when it comes to the creatures of the Nevernever, there's far more going on than meets the eye. Before it's all over, Harry will find himself caught between friends, enemies, and arcane forces bent on his destruction. Is it any wonder he can't find a date? Written by Jim Butcher and Mark Powers. Art by Chase Conley.

WELCOME TO THE JUNGLE: Harry Dresden is investigating a brutal mauling at the Lincoln Park Zoo that has left a security guard dead and many questions unanswered. As an investigator of the supernatural, he senses that there's more to this case than a simple animal attack, and as Dresden searches for clues to figure out who is really behind the crime, he finds himself next on the victim list, and being hunted by creatures that won't leave much more than a stain if they catch him. Written exclusively for comics by Jim Butcher, The Dresden Files: Welcome to the Jungle is a brand-new story that's sure to enchant readers with a blend of gripping mystery and fantastic adventure. At by Adrian Syaff.