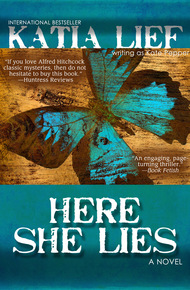 Katia Lief is best known for her internationally bestselling crime novels, some of which were originally published pseudonymously as Kate Pepper. Her newest, THE MONEY KILL, was just published by HarperColllins. She teaches fiction writing at The New School in Manhattan and lives with her family in Brooklyn.

Here She Lies by Katia Lief

When she discovers e-mail evidence of her husband's infidelity, Annie Milliken is shattered. Dismissing his pleas of innocence, she leaves their home in Kentucky and takes their baby daughter to western Massachusetts and the safe harbor of her identical twin sister, Julie. But Annie's sense of security evaporates when she arrives into a crime scene: a woman who resembles Annie and Julie has been murdered right in front of Julie's house.

Annie and Julie cooperate with the murder investigation. Meanwhile, the sisters become as close as they were growing up, spending their days together, dressing the same, sharing the baby. But when Annie applies for a job, everything comes undone. Her credit cards are stolen just as she's arrested for grand larceny. She realizes that she is the victim of identity theft, but has yet to understand the true scale of the crime. As her losses continue to mount with the abduction of her daughter, Annie fears that a deeper, darker crime has been at play all along.

All day I had felt that everyone could see me for what I really was: a wife who had left her husband; a mother who had taken a child from a father; a woman who had lost hope in a man. Did it show? I knew that from now on, when people mentioned the Goodmans, it would be with the tag line "that broken family." I was Anais (Annie) Milliken-Goodman. (Anna-ees: the French pronunciation. Naming us Anais and Juliet had been a flight of fancy in the romantic early years of our parents' marriage.) Would I drop Goodman from my name? Slice off the dangling hyphen? Go back to square one? If I did, then Lexy and I would officially be Alexis Goodman and Anais Milliken. But I had always wanted to share a last name with my child. Maybe we could drop our last names all together; she could be just Lexy and I could be just Annie. We could start a band. A sob ratcheted up my throat and escaped as a shout. I felt like such a fool. What had I done?

A headache blossomed as the little blue car's engine leapt into gear. The jolt quieted Lexy and I felt guiltily indebted to the sudden, unnerving grind of noise. Poor baby. What did she make of all this? Did she know something momentous was happening today? That the day was a knife carving a groove in our lives between before and after? Maybe I was wrong but I sensed she felt the cut, the separation, as deeply as I did.

Why had Bobby done it? Why hadn't I been enough for him? There was a time I would have bet my soul that he and I were made for each other. With him, I had felt almost as right as I did with my identical twin: one person, joined in separate bodies.

I switched on the radio and we listened to classical music as we drove out of Albany toward the New York-Massachusetts border. When Lexy sighed, deep and long, I felt myself relax a notch. In the rear view mirror I saw she had fallen asleep and I whispered "thank you" to the windshield. Humming along the highway, we consumed the miles to Great Barrington. To Julie's. I had never been to her new house but I felt I was going home. I was as eager to arrive as I had ever been to get anywhere. Home after work. Bed after a tiring day. Birth after labor. Love after loneliness. Resolution after doubt.

After weeks of agony, I had a made a decision. I couldn't just stay there, living with Bobby, sleeping with him, working side by side, wondering who she was. I couldn't agree that black was white or white was black when all I saw were shades of gray. I would not repeat my mother's mistake, accepting my father's lies for years until finally it turned out her suspicions had been correct: he was cheating. It was terrible watching her struggle to recover from her own self-deceptions, her willingness to believe his lies; though in the end she never did recover—cancer got her first. We were only ten when our mother died, leaving me with the conviction that a woman should never compromise on the truth. At twelve, when our father died suddenly in a car accident, I learned that nothing was permanent or real except what you felt in your heart. You had to create your own reality, believe in it and it would make you strong. The old maxim that time is too precious to waste became a vivid reminder to always take action when I was sure of something.

Until Bobby could tell me the truth, there was no going back.

Driving, I thought of something Julie had once said to me, about how she and I were as close as any two people could possibly be. Closer. How even marriage could not compare. It was my wedding day, a cool May afternoon in Kentucky and I was two months pregnant. (Almost exactly one year ago; Bobby and I had not even made our first anniversary.) The night before, she had tried on my wedding dress and it was loose on her. I was already plumping up but not showing yet; for the first time ever, we were not exactly the same size. Standing there in my dress, waiting for my music cue to walk the aisle, she put her hand on my belly and repeated, "Closer."

My wedding day. Our first. Julie's engagement had broken up two years ago, dropping her back into a dating scene that felt more ruthlessly competitive the older you got. When I became pregnant and Bobby and I decided to marry, Julie shared our happiness. She knew, in the deep unspoken way of twins, how in love with Bobby I was. (Though now, looking back, I wondered if he was already seeing her.) In the end only motherhood could compare to the absolute connection Julie and I shared. Romantic love was intoxicating. Toxic. I felt sorry for people who didn't have a twin with whom to entwine when life weakened you; on whose fibers of love and shared memory you could always strengthen yourself. I decided I was not eligible for self-pity, even today, because I had a daughter and a twin sister. Julie and I had clung together through every twist and turn of our lives, ultimately raising each other—at the shoddy Long Island boarding school where our misguided guardian Aunt Pru had placed us immediately after our father's funeral, in the sleepaway camps where she had sent us for two months every summer, and during the single dull week we spent with her annually in California. We had survived all that. I would survive this.

When we finally crossed the border between New York and Massachusetts, we had been on the road for over two hours, not the fifty-seven minutes predicted by the global positioning system suction-cupped to the windshield. Somehow, despite the GPS, I had managed to get lost twice. And a detour to nurse Lexy and change her diaper had inflated into a dinner stop when I realized how hungry I was. By the time we turned the car onto Division Street, Julie's street, a gentle country twilight had eased into that deep purple just before the sky went black. It was almost eight p.m. My body was screaming for sleep and Lexy was just...screaming.

Julie had explained to me that the barn she had bought last year and renovated through the winter was at the crossroads of Division Street and Alford Road. She said it was painted red and would be impossible to miss. Division Street was long and winding and dark, just what you would expect of a country road at night. But then gradually the darkness began to fade. It was like someone had spilled light all over the street, light that spread toward me. Washed over me like a wave, even filled the car. Like the car's starting jolt back at the airport, the brightness of this light quieted Lexy. Her wailing voice simply stopped as we pulled into the flashing arcs of white and blue and red lights.

I felt a sinking inside me, a terrible dread, as I pulled up behind the last of three squad cars parked in front of a big red barn. There was an ambulance. A series of disembodied camera flashes. A stout man wearing a Red Sox baseball cap wrapping yellow police tape around the trunk of a tree, trailing it in search of another anchor. This close, the rotating police lights blinded us each time they swept over our car.