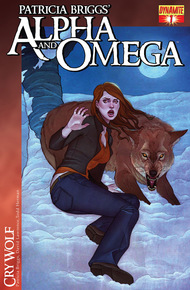 Featuring both story arcs "Alpha & Omega: Cry Wolf" (issues 1-8) and "Homecoming" (issues 1-4). Anna never suspected that werewolves exist, till the night she became one herself! A rare Omega wolf, for three long years she's kept her head down at the bottom of the pack, learning to trust no one. Now, Anna's caught the eye of a powerful Alpha wolf, who recognizes her true value as a member of the pack. What will happen when Alpha and Omega come together? Cry Wolf is the latest series of supernatural adventure by New York Times best selling fantasy author Patricia Briggs. Set in the same world as her popular Mercy Thompson novels, it's sure to be a hit with fans old and new! When Mercy travels to the Tri-Cities of Washington for a job interview, she quickly finds herself smack-dab in the middle of a gang war between rival packs of werewolves. And as if fangs and fur weren't bad enough, Mercy must deal with the scariest creature of all: her mother, who is convinced that Mercy is making a mess of her life and determined to set her daughter on the right course.