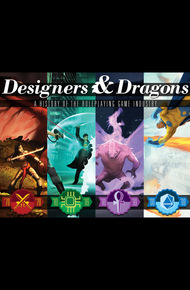 Shannon Appelcline has been a writer since grade school, when he entered Doctor Who-influenced short stories into school-wide book competitions. His professional publications began in the early '90s, when he coauthored a historical fantasy supplement, Tribunals of Hermes: Rome (1993), for White Wolf's Ars Magica game. He then wrote and edited several other roleplaying books in the '90s and '00s, most of them for Chaosium — a publisher that he also briefly worked at.

Today, Shannon has seven different books in process, planned for publication over the next four three or four years. They cover a spectrum of interests, including cooperative design, game design, fantasy literature, and (of course) more gaming history. Other current projects include overseeing a prospective series of books for RPGnet and coauthoring the Touched comic book. Many of these current projects are being done in conjunction with friend and coworker Christopher Allen.

Designers & Dragons is a comprehensive picture of the history of the RPG industry. Learn about the colorful history of TSR and the wave of D&D inspired games (and gaming companies) to follow, and dip your toes into wargaming trivia. Whether you're a long-time gamer who greets each mention of a '70s title with "I remember that!" or a new-to-the-hobby sort who wants to know how we got here in the first place, Shannon Appelcline's meticulously researched history won't disappoint.

"Perhaps this bundle's dark horse, since it covers games of the non-video variety, this spectacularly good four-book series sneaked up on us via a successful Kickstarter and subsequent great pass. We had to go see what it was all about - and it's a vital history of tabletop gaming through four decades and beyond, hurray!" – Simon Carless

From Designers & Dragons: The 70s

The roleplaying industry is a very creative one, built on the backs of dreamers able to imagine different worlds. It's also a small industry, which makes it vulnerable to any numbers of disasters. That's what you'll find at the heart of this book, beneath the trends and under the skin of the companies: a story of designers and their dragons.

There are designers aplenty within these covers.

The names from TSR are among the best known: Dave Arneson and Gary Gygax, who together created Dungeons & Dragons; Jeff Perren and Dave Wesely, who provided some of its foundations; and Eric Holmes, Tom Moldvay, David "Zeb" Cook, and Frank Mentzer, who each rebuilt the game. However, the stories of designers from other companies are no less important, among them: Ken St. Andre, who dared to create the second FRP; Greg Stafford, who created a game to depict his long-imagined world of Glorantha; Bob Bledsaw, who believed in RPG supplements; and Dave Hargrave, who was willing to share his own vision of D&D.

And the dragons, they're sadly here as well. They roosted upon the eaves of the old Dungeon Hobby Shop.

Ten different legal threats or lawsuits all get some attention within TSR's history, including: Dave Arneson vs. TSR (twice), TSR vs. Heritage Models, Elan Merchandising vs. TSR, TSR vs. Mayfair Games (twice), TSR vs. New Infinities Productions, TSR vs. GDW (twice), and TSR vs. the whole internet. And that was just the pick of the litter, ignoring more mundane issues such as Rose Estes and Will Niebling suing TSR for rights related to stock options. TSR also faced dragons of other sorts, including board fights, ousted presidents, Californian exiles, decade-long vendettas, secret cabals, hysterical media, and a long fight with the moral minority. Dragons come in all shapes and sizes, you see.

Don't think that the rest of the industry was left out. Other publisher histories highlight a veritable flight of dragons, including corrupt printers, abrupt changes of direction, poorly received revamps, massive overprinting, fights over copyright, disagreements over contracts, near bankruptcies, thieving partners, and more.

Of the 13 companies profiled within these pages, only 3 to 4 are still in business (depending on how you count), and one of those is entirely out of the roleplaying business. As for the rest: they're all shadows of companies at their heights. That's because dragons have stamina; they keep wearing away at companies and their designers, like the sea against the shore. In the end, they always win.

The story is not in the victory or the loss, but in the fight. Come and read the story of the first 13 notable companies to enter the RPG industry — the story of their designers and their battles against the dragons.