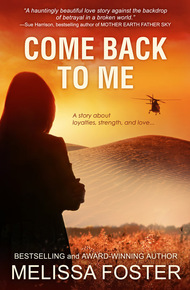 Melissa Foster is the award-winning author of four International bestselling novels. Her books have been recommended by USA Today's book blog, Hagerstown Magazine, The Patriot, and several other print venues. She is the founder of the Women’s Nest, a social and support community for women, the World Literary Café. When she's not writing, Melissa helps authors navigate the publishing industry through her author training programs on Fostering Success. Melissa has been published in Calgary’s Child Magazine, the Huffington Post, and Women Business Owners magazine.

Melissa hosts an annual Aspiring Authors contest for children and has painted and donated several murals to The Hospital for Sick Children in Washington, DC. Melissa lives in Maryland with her family.

Come Back to Me by Melissa Foster

Tess Johnson has it all: her handsome photographer husband Beau, a thriving business, and a newly discovered pregnancy. When Beau accepts an overseas photography assignment, Tess decides to wait to reveal her secret--only she's never given the chance. Beau's helicopter crashes in the desert.

Tess struggles with the news of Beau's death and tries to put her life back together. Alone and dealing with a pregnancy that only reminds her of what she has lost, Tess is adrift in a world of failed plans and fallen expectations. When a new client appears offering more than just a new project, Tess must confront the circumstances of her life head on.

Meanwhile, two Iraqi women who are fleeing honor killings find Beau barely alive in the middle of the desert, his body ravaged by the crash. Suha, a doctor, and Samira, a widow and mother of three young children, nurse him back to health in a makeshift tent. Beau bonds with the women and children, and together, with the help of an underground organization, they continue their dangerous escape.

What happens next is a test of loyalties, strength, and love.

Suha huddled over the hand-drawn map, wishing the shadows from the candle would stop dancing across the page and thankful that the sandstorm had finally ceased. The cadence of helicopter blades grew closer. She blew out the candle and stared into the darkness of the makeshift tent, fingers clenched, eyes wide, certain that her end had come. Samira and her three children lay sleeping on blankets they’d strewn across the sand, oblivious to the sounds of their hunters. The chopper’s rhythmic thumping passed overhead, then faded slowly into the distance.

Suha allowed herself to breathe once again. She unfurled her fingers from the edge of the thin blankets beneath her, her only cushion from the dense sand. One hand covered her racing heart, the other held her balance. Suddenly an explosion broke through the silence. Suha scrambled on her hands and knees toward Samira.

“Have they found us?” Samira pulled her daughter against her side and took quick inventory of her two young sons, both also fast asleep.

“Shh,” Suha commanded. She ran out of the tent and into the black of the desert night, pulling her frayed sweater tight across her plump body. Plumes of smoke rose in the distance. She whispered a fast prayer. Her heart pounded against her ribs as she spun around, looking for insurgents. The distant smell of sulfur assaulted her senses, a smell she’d become far too accustomed to since the beginning of the war. She hurried back into the tent and grabbed a flashlight.

“Suha! No!” Samira said in a harsh whisper.

“Stay with the children.” In the two months that they’d been on the run, Suha had worn the hat of both mother and father to Samira, and jadda to Samira’s children. She’d never imagined herself as a grandmother, and bore the weight of the responsibility proudly. She would die before letting any harm come to them.

Outside the tent, Suha shivered from cold and fear as adrenaline carried her in the direction of the smoke. A mile away, she estimated. The tension in her shoulders eased. She listened to the darkness—her own panting breath the only break in the silence. A deep, low moan came from her left. Suha froze. She raised the flashlight, illuminating a path on the sand before her and then whipped the light to the sides, behind her. The shelter was nowhere in sight, tucked perfectly behind an enormous dune. She was alone. Praying that she’d made up the noise in her own mind, she inched toward the west, using her hands to pull herself up a small hill. At the peak, she crouched, catching her breath, straining to hear any sounds; she was met with silence. She waited until the sound of her heart beating behind her ears calmed. Satisfied that they remained undiscovered, she turned back in the direction of the shelter. The light swept over a dark lump in the sand. Suha gasped, jumping backward and expecting a siege of insurgents to appear. She flattened herself to the dune and thought of the children. Better her than them. She pulled her body up, hoping her shaking legs would sustain her as she moved forward. She’d make her father proud, rest his soul. Gathering courage like a cloak, she lifted the light once again. A man lay in the sand, blood pooled around him, his arm cocked at a painful angle. The physician in her took over, propelling her to his side. Male, early thirties. Pulse. Broken arm and leg. Contusions. Alive.Arabic flew from her mouth, “Hello. Can you hear me? Hello.” There was no response. Suha rushed back to the shelter, her sixty-five-year-old body aching and heavy. As she flew into the tent, Samira’s eyes shot open, “What is it?”

Suha bent over the blankets, rifling through them, casting away the smaller ones and collecting the longest, strongest ones. Her fingers worked furiously, tying them to two walking sticks as she spat orders, “An injured man. You must help me. Do not wake the children.”

“Aagh,” Suha swatted at the air. “Don’t be foolish. I’m alive, aren’t I? He’s American, not Iraqi.” She stood, dragging the crude stretcher behind her. “Come! Now!” she ordered.