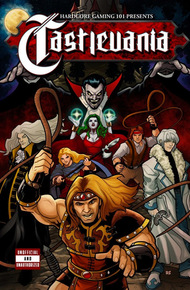 HG 101 Presents: An Unofficial Guide to Castlevania by Kurt Kalata

Welcome to the hell house! Presented by the esteemed retro gaming website Hardcore Gaming 101, this book is an UNOFFICIAL and UNAUTHORIZED guide to Konami's video game series that includes 158 pages with full reviews of over thirty Castlevania titles - starting from the 1986 Nintendo original up to the 2014 Lords of Shadow 2 - plus reviews of clone games, soundtracks, books, trivia, and more!

"Accidentally prescient again in time for this bundle thanks to the IGAVania Kickstarter, we would have included this HardcoreGaming 101 book no matter what. As per usual with Kurt and friends - it's a beautifully done 'just the facts, Sir' on one of the greatest game series of all time." – Simon Carless

The Castlevania series has been around since 1986 and has seen numerous changes over the years. The original Castlevania games began as an homage to Hollywood monster movies, and were known for their brutal, though rewarding difficulty. The series moved away from those roots with Symphony of the Night, released eleven years after the first game, morphing the genre into a more approachable action-RPG, in a subgenre known as the "Metroidvania". Another decade passed, and it was handed to a European team, creating a cinematic action game to compete with other big budget titles. Throughout that, there have been weird aberrations, like a multiplayer loot hunting spinoff and an ill-conceived fighting game.

Still, there are some solid, defining elements of the Castlevania series. The games feature heroes with whips, who fight vampires and other hellish creatures. The visuals are fantastic, typifying some of the best technical work of the given era. The music is top tier, some of the most outstanding video gaming has to offer. Other elements include the arsenal, such as daggers, axes, and time-halting stopwatches; the hearts to power these weapons; the rhythm and flow of the movement and combat; the sound effects; and the Belmont clan and their war against evil throughout multiple generations.