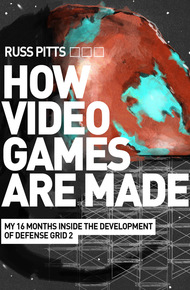 How Video Games Are Made by Russ Pitts

HOW VIDEO GAMES ARE MADE: MY 16 MONTHS INSIDE THE DEVELOPMENT OF DEFENSE GRID 2 brings you behind-the-scenes of the creation of a modern video game.

Over nearly two years and hundreds of hours of interviews, veteran video game journalist Russ Pitts (Polygon, Kotaku, Joystiq, IGN, Digital Trends, US Gamer, The Escapist) has been given total access to every stage of development of Defense Grid 2, sequel to the cult-hit tower defense game by the makers of the popular online shooter Counter-Strike: Global Offensive, and dives deep into the technological innovation, creative artistry and hard-nosed business that combine over weeks, months and years to make a game.

From moments of startling inspiration to times of crushing stress, the author has been present for every aspect of production — major milestones, critical beta tests and sometimes contentious design meetings.

HOW VIDEO GAMES ARE MADE is based on the article series written by Pitts for Polygon.com, with expanded interviews and never-before-seen material. The result is a look unlike any other into the hidden world of game development and the high stakes gamble of making games.

"Rarely, if ever, has a writer been embedded within the creation of a game, no holds barred, for an extended amount of time. So it's delightful to see this insightful book from Russ Pitts which is about the creation of Counter-Strike: Global Offensive co-creator Hidden Path's Defense Grid 2 - but is also about the real-life trials & tribulations at game studios everywhere." – Simon Carless

The screen is a blur of motion.

I'm sitting in the conference room at Hidden Path Entertainment. There is a television on the wall attached to a computer. The computer is running the video displaying on the screen. It's a video of a video game under construction.

It's now the end of August, 2014. Defense Grid 2 has been in development for just over 16 months—four months longer than planned. And it's still not finished.

The video was made earlier in the day, captured from Lead Designer John Daud's workstation. It is exactly what he saw on his own screen when he used Defense Grid 2's level editing tool to make a new level for the game. The video is part of a production that will be released in September to explain how potential players of Defense Grid 2 can make their own custom levels.

As Daud watches the video playing on the television on the wall, he describes what he's seeing—what he did earlier. The screen is a jumble of activity. Lines are drawn, structures created. Daud is watching his own mind in action, seeing himself perform tasks he's performed hundreds of times.

Video Daud creates a path for enemies to walk along, then tweaks the geometry, tapping into years of experience of what makes a good Defense Grid level—and of how to perform that work most efficiently. The decisions seem almost random, but over time, patterns emerge, and the ingeniousness of the hundreds of intricate creations and almost unconsciously made decisions becomes apparent.

As Daud watches the captured echo of himself on the screen, the aesthetics, design and technology of his craft coalesce into a whole. By the video's end, Daud has created a level, a task he has performed over 200 times to date. A task that has been supported by the creations of technologists and enhanced by creative artists.

Twenty of the levels Daud has designed in the past year or more are in the near-finished game, Defense Grid 2. And that game is currently in the process of being tested, tweaked and certified.

Defense Grid 2 is less than a month from its planned release date, but for John Daud, the work is done. Here in this room, he's reliving the experience of making it and commentating on his performance to a camera. It is an ex post facto reenactment in miniature of the process he has just endured of making this as-yet unfinished game.

But his part is done. The game is designed. Now all he has to do, once again, is wait.