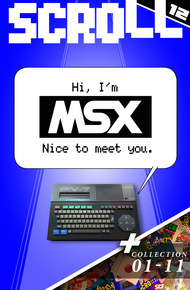 SCROLL is video game history uncorked — deep dives into many different pockets of many different sizes from the last 25 years of games, and more often than not, stuff that few people have ever heard about. SCROLL 12: Introducing MSX traces the history of the MSX platform: an underdog 8-bit home computer that really delivered... sometimes despite itself.

Known best for dozens of classic games from Konami, MSX was the home of tons of other interesting titles, creating and shaping genres we'd come to love. With sizeable audiences in Japan and Europe in the '80s, consider this the introduction to MSX Americans didn't have.

Also included is the SCROLL 01-11 Collection, featuring every other issue of the magazine:

"Ray finishes off the SCROLL series in style with a tribute to the MSX, somewhat ignored on Western shores, but home to some of the standout (and weirdest!) Japanese games you've never heard of, but totally should. And for people who missed the earlier bundle we ran, we included ALL of Scroll's run for your delectation - mm, Artdink." – Simon Carless

Not every MSX game was a shooter, platformer, or graphic adventure. Some straddled the lines between genres, and others drew their own. Hobbyist programmers would come up with some great ideas, but in Japan, commercial companies had the money and people to deliver truly different games to a large, receptive audience. Enix always solicited games from outside their walls, but most were insular. But at least there were companies like Bothtec, who didn't publish a ton of games over their lifespan, but were quickly established, and responsible for some games that didn't like being defined. Their best example was Relics.

Within Relics, you are a spirit of consciousness; a shadow of who or whatever you were before. Mystery forms the foundation of this world—other than a brief introduction to what happened in the game's universe before you begin, you are given no extra story, no help from others, and no clues. Even the instruction manual described nothing but the basic controls, and there's no way to save your progress. What's known is that there's a conflict between Heaven and Hell, and somewhere in the middle is you, a past life caught at the edge of the entrance to Hell with no clear way to escape.

No clear way, that is, except to use what's available to you. Though you have no corporeal form, you can inhabit the bodies of the beings you come across. Some are docile, but from the beginning, you'll have to carefully defeat the red, lizard-like guards patrolling the first area. Pummel one enough times and they'll die and collapse. Once an enemy is downed, you immediately exit your current body and can possess the next one. You then inherit their attacks and strength—some have guns, which can be helpful, but soon you'll encounter deadly traps or stronger species that may need fancier footwork.

The body snatching is not just a way of powering up—you also use it for social engineering. Guards won't give you a second look if you're one of them, but they might start attacking another species that just struts up beside them. Likewise, taking the body of an animal of Hell will ensure the other animals are friendly, or at least indifferent. Despite being in a terrifying place with no earthly clue of what to do and no one to trust, pacifism can go a long way. But keep in mind there's very little dialogue in Relics, and battling isn't really a focus, either. At its core, this is an adventure game, with items to find, doors to unlock, pathways to reveal, and some backtracking to deal with.

Relics is also profoundly silent—there is absolutely no music outside of the opening and ending themes. You hear only the motions of (presumably) ocean waves at the start of the game, the noises from key actions, and the pulsing from whatever weird object may be in the vicinity. The game also manages to pull off a moody science-fiction aesthetic before other games started taking big chunks of inspiration out of movies like Alien and Blade Runner. No exceptions here, though: the first half of Relics looks quite creepy, but there's a certain beauty to its unexplored world, "helped" by the minimal sounds. And once you make your way to the door to Hell, the backdrop is decidedly Giger: squirmy, bony, disorganized, fishlike. And yet, again, it's only unsafe if you let it be that way.

Like several other MSX games around the same time, Relics is not very large—you may spend some time figuring out every nuance of the puzzles you come across, but you'll reach Hell in relatively no time, and from there it's just a couple more puzzles that stand in your way to freedom. The question is if you can handle the journey, because Relics moves at a languid pace, and coupled with the stutter-scroll of the playview and long hallways to run down, it's easy to lose sense of where you are on the map. And depending on your behavior during the game—do you punch out everything you see, or just do what you have to in order to get by?—you receive different endings. Your goal doesn't change, and you still see your character climb back out the pit it began at, only now with a body, but the epilogue will have a different taste.

While the MSX2 version is often the most referenced, Relics was available on virtually every Japanese PC, got an unrelated spin-off on Famicom, and entered the pantheon of the country's classic computer games. Bothtec would revisit the series in a 1998 sequel for Windows that was a more traditional RPG, and they even planned a 3D installment for the original Xbox.

Whatever expectations people had when they first played Relics were all but obliterated when they started it up. Back when everything about PCs was new and interesting, you'd pick up on so many comments from analysts, technologists and futurists, all talking about computer games that would deliver unforeseen worlds. A lot of that speculation was because of alternative games like Relics; thoughtful projects that broke away from the status quo and actually got attention for it.