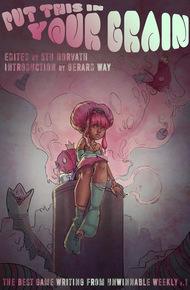 Stu Horvath is the editor in chief of Unwinnable. He reads a lot, drinks whiskey and spends his free time calling up demons. In addition to his Unwinnable, his work has appeared in Wired, the New York Daily News, Paste and a host of other outlets.

Gerard Way is the former lead vocalist of My Chemical Romance and writer of the Eisner Award-winning series Umbrella Academy, among other comic books. His first solo album, Hesitant Alien, was released in 2014.

Put This In Your Brain: The Best of Unwinnable Weekly by Stu Horvath & the Unwinnable Writers

In 2014, Unwinnable launched a weekly digital magazine, an eclectic mix of cultural criticism, fiction and general weirdness. The 28 stories contained in this volume, penned by some of the most respected voices in the industry, represent the best games writing published in Unwinnable Weekly's first six months.

Recent videogames like Dragon Age: Inquisition compete for space with weird old ones like Takashiís Castle. Youíll read stories about games that donít require screens, like Netrunner, pinball and Choose Your Own Adventures. You may also find that as much as Unwinnable's stories are about play, theyíre also about politics, horror, compulsion, love, death and the whole myriad of experiences that define our lives.

With an introduction by Gerard Way, singer of My Chemical Romance and writer of the Eisner Award-Winning comic book series Umbrella Academy.

"Online game periodical Unwinnable is a bit of hidden gem within game writing - not least since they much of their top material transitioned to a weekly magazine subscription model following a successful Kickstarter. Unwinnable helmer Stu Horvath has put together this exclusive book of some of the best articles from the first year, initially just for this bundle - and we couldn't be happier!" – Simon Carless

The nature of interactive media gives games an inherently chaotic core. There is no right way to play, so they themselves remain fluid. Mercurial. Defying our expectations of them. They are artifacts defined by preference.

Like the way I will do my best to sneak around in a game that doesn't have stealth mechanics. Or the way Chuck constantly leaves the pack to explore on his own in co-op games (you know, like Left 4 Dead). The developers themselves don't even know what their games will do once they set loose in the wild – just look at World of Warcraft's Corrupted Blood plague or the way Gears of War players would use boom shields to build makeshift fortifications in Horde Mode.

In recent months, I have become enamored of the term 'interactive thinger.' The broader the definition, the better, really – it removes a lot of aesthetic hang-ups when you decide practically everything outside of the 9 to 5 grind is play. That way, I can think about board games and pen and paper RPGs and folk games in the same way that I think about videogames, and vice versa.

Games aren't like Platonic solids or animal species. I cannot force them into rigid taxonomies or define them by obsessively cataloging criteria. I can just enjoy them, and wonder why.