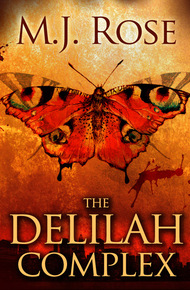 The Delilah Complex by M.J. Rose

As one of New York's top sex therapists, Dr. Morgan Snow sees everything from the abused to the depraved. The Butterfield Institute is the sanctuary where she tries to heal these battered souls.

The Scarlet Society is a secret club of twelve powerful and sexually adventurous women. But when a photograph of the body of one of the men they're recruited to dominate -- strapped to a gurney, the number 1 inked on the sole of his foot -- is sent to the New York Times, they are shocked and frightened. Unable to cope with the tragedy, the women turn to Dr. Morgan Snow. But what starts out as grief counseling quickly becomes a murder investigation, with any one of the twelve women a potential suspect.

The case leads Detective Noah Jordan -- a man with whom Morgan has shared a brief, intense connection -- to her office. He fears the number on the man's foot hints that the killings have just begun. With her hands tied by her professional duty, Morgan is dangerously close to the demons in her own mind -- and the flesh-and-blood killer.

Warm, engulfing, darkness surrounded him. Flesh moved over him. Naked legs held him, vise-like, rocking him, rocking him, lulling him back into haze. Shoulders, neck, torso, blocking all light. Hot breath on his neck. Soft hair in his face, soaking up his tears.

One wrenching and embarrassing sob escaped in answer.

No. Take me back to the threshold of coming.

Let me loose in you.

The pleasure was too much pain. He wasn't taking, he was being taken. Sensations were being suctioned out of him. No control over the pulsing now.

He didn't know what time it was or how long he had been sleeping. Or even if he still was sleeping. He only knew that he had never been used like this and never cried like this before. Never cried before at all. Now he was reduced to weeping because--

He could taste someone else on his lips. Smell someone else in his nostrils. A sour smell. A sweat smell. Not sweet. Everything stunk of stale sex. He wanted more.

Nothing for a few more minutes. Or another hour? Ribbons of sleep. Weaving in and out of unconsciousness. Fighting through the interwoven dream web. Or had he awoken at all?

Must be in bed. His bed? He didn't know. Focusing, he forced his fingers to feel for smooth sheets but only felt skin. His own. Moist and frigid.He tried to move his hands away from his chest, to his sides, but he couldn't.

Remember something, he told himself. Try to catch something from last night. No memory.

So he had to be sleeping. All he had to do was wake himself up. Open his eyes. From there he'd sit up, stretch, feel the damn sheets, put his feet down on the carpeted floor and get to a shower where he would wash away this fog.

But he couldn't be home.

The body had not been his wife's.

Was it any lover he'd ever known?

He fought, ignoring the tears, to open his eyes. To push one more time through the last vestiges of the milky blue fog. Part of his brain, the small section that was functional and was informing the emotion that led to the weeping, knew that something was desperately wrong. This was just not about fucking. Hot streams of tears were sliding down his cheeks and dripping off the sides of his face. His rib cage hurt from the crying.

He gulped air, hoping that would help clear his head, and became aware that the air was icy.

Weak, helpless, spent, he lay there.

The hands stroked his hair. Cupped his skull. He felt himself stiffen again. Tears and erections. What was wrong with him? Fingers played with his curls. Where each hair follicle met his scalp, his blood sung, sending shivers of pleasure down his neck, his spine, to his solar plexus.

Please. Take me back inside of you.

He moved to reach up and brush the wetness off his face but his hand wouldn't lift. A metal bracelet dug its edge, hard and icy, into the flesh of his wrist.

When had he been chained?

He tried to lift his head and shoulders and felt another pressure holding him in place. A band across his chest prevented him from rising. Falling back, his head hit the thin pillow. Not the overstuffed down pillows on his own bed, but a poor excuse that offered only a few inches of padding between his head and the inflexible cot.

Was this more of the dream? It didn't matter, as long as the fingers kept playing so exquisitely with his hair. He tried to move his legs so that he could thrust up but the same pressure that striped across his chest also held his ankles. The same sound of metal against metal rang in his ears.

On his back, naked, shivering, he gave up wanting to understand.

The fingers were torture now. The rhythm of the stroking was making him harder. He opened his mouth, wanting to lick the skin he could smell.

His tongue wouldn't move. He tried to speak but his mouth was filled with a dry thickness that absorbed the sound. How could his tongue be swollen so big?

He worked at it for a few seconds, then tasted the cloth gag.

He saw a glimmer of silver. Bright in the room's darkness. Heard the murmur that razor-sharp metal makes as it cuts, exacting and fast.

The only thing he was capable of bringing forth from his body was more tears.

Because he, Philip Maur, who was fearless, was scared.