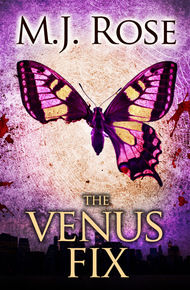 The Venus Fix by M.J. Rose

As one of New York's top sex therapists, Dr. Morgan Snow sees everything from the abused to the depraved. From high-profile clients with twisted obsessions to courageous survivors, the Butterfield Institute is the sanctuary to heal battered souls.

Fantasies that are all too accessible.

Then the women start dying online, right in front of their eyes.

Now it's all about murder.

After all these months, I'm willing to concede. Nothing will make me miss you less. Nothing will ease the razor-sharp pain that wakes me up every morning and keeps me from falling asleep at night. Not while those women roam -- no, not quite women, but witch women who go haunting, casting spells and capturing souls without anyone realizing just how dangerous they are or noticing the evil running in their veins. Evil that glows secret bright in the night and feeds the junkies who drool, eyes glued to their bare breasts and wet lips, ears attuned to low moans and dirty chatter while they stroke, massage, and manipulate themselves to orgasm and then languish in some fugue state until they crash back, back, back to earth.

There are twenty-three days left until your birthday, and to show you how much I love you, I promise, by then all five of these women will have been punished.

What I'm going to do won't bring back my appetite or my curiosity or my energy. It won't do a damn thing for me. That doesn't matter. Because this I do for you.

Twenty-two days remaining. Damn, it was freezing. He'd opened the window to chase away the smell of beer and grass and sex, but then he'd fallen asleep, and now it was so cold he didn't even want to stick his head out from under the covers to see if she was still there. But Timothy wanted to come again more than he wanted anything else, so he did it, he pushed the blanket down just enough to peek out.

In his darkened bedroom she was the only thing that he could see. Still there. Still naked. Her lovely breasts with their pink-tipped nipples pointing up.

Timothy was awake now, the dreams replaced with a fresh fantasy of what the next minutes would bring. She was golden. That was the best way to describe her: the tawny color of her skin, the long blond curls, and the feeling inside of him that burned like a sun when he was in her glow. And all he had to do was lie back and let her magic work on him.

None of the girls at school were this experienced. Or this gorgeous.

Timothy had fooled around with a lot of different crap, but this was weird. What kind of pervert would think this was hot?

"Penny," he whispered. "What are you doing?"

Maybe she wasn't acting. Maybe she really was sick. Food poisoning made you sick like that. He'd had food poisoning once. She looked sick, didn't she? Her skin was slicked with sweat, her hair was flattened to the sides of her face, and her eyes looked glassy and feverish.

She looked like she needed help. Now. Fast. But what could he do?

Grabbing the blanket off the bed, he wrapped it around his naked waist and started for his bedroom door. Then he stopped -- there was no one home. His parents were out. Jeez, what was he thinking? Thank God they were out because Penny, sick or not, was way off limits.

He looked back at her to make sure. Yes, she was still moving in that slow-motion, sick way, her moan now a low constant sound that made him want to put his hands up to his ears and block it out.

He grabbed the phone.

He'd call for help. But who? The police? An ambulance? Amanda? Would she know what to do? No, she might tell her mother. He couldn't risk that. Besides, what if he was wrong? What if this was a game? What if Penny was acting out some perversion by request? He knew she did that sometimes.

He glanced back at her, at her small hands gripping the arms of the chair, at her feet, so fragile and inconsequential, at the worn carpet he'd never noticed before. Everything looked sort of pathetic now -- the meager furniture, the really small television -- except for the view out the window. He'd never noticed any of this before. He'd always been too busy, under her spell. But not now. Not anymore.

Pick your head up, Penny. Look at me. Tell me what's going on. What should I do?

She threw up again.

At the same time he heard the voice, the screen went black. He ran to the monitor and stared at it, seeing only his own ghostly image staring back.

He hit the back button to see if the problem was his computer or hers. The site he'd been to before hers popped up. He hit the forward key.

A dozen thoughts hit him all at once. They were going to ask him who he was, and he was going to have to tell them, and then his parents would find out he'd broken the rules again, and God only knew what they would do to him this time. He had been going to all those stupid therapy sessions at school and his parents were finally easing up on him, but if they found out about this.what would happen then? Besides, maybe he was wrong. Maybe Penny had only been acting out some stupid game.

"Can you tell me what the emergency is?"

"We have a car on the way to your house. Are you hurt?"

"Are you all right?"

"The police are on their way. They should be there in less than thirty seconds." The operator's voice eased and softened.

Timothy heard the intercom buzz in the kitchen, hung up, ran out of his room and down the hall, the panic rising like bile in his stomach.

He pressed the button. "Yes?"

"Timothy, the police are here," the doorman announced. "They said it was an emergency. I'm sending them up."

"No," he shouted at the doorman. "No. Let me talk to them." There was a pause. Then: "Timothy Marcus? This is Officer Keally. Is there something wrong up there?"

"Yeah, but by mistake. I was asleep, dreaming, thought I saw, heard something, but it wasn't real."

"Are you sure you don't want us to come up and check things out?"

Timothy actually hesitated. Should he tell them and face the consequences? Deal with whatever his parents would do to him? He had seen something weird on the computer, hadn't he? She was sick, wasn't she?

Or had some weird fucker convinced Penny to act out his perverted scenario?

"I'm sure," he said into the intercom.