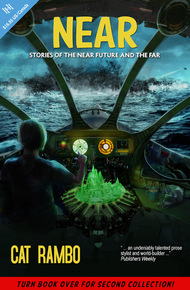 Cat Rambo lives and writes primarily in the state of Washington, with occasional peregrinations elsewhere. A prolific short story writer, she has had work published in such places as Asimov's, Clarkesworld Magazine, Weird Tales, and Tor.com. Her first novel, Beasts of Tabat, appeared in early 2015 from Wordfire Press and will be followed by its sequel, Hearts of Tabat, in late 2015. Also appearing this fall is Neither Here Nor There, Rambo's fourth story collection.

Award nominations have included the Nebula and World Fantasy Awards, the latter for Rambo's editorial work with Fantasy Magazine. She is a frequent volunteer with the Science Fiction and Fantasy Writers of America (SFWA) and is currently its President. She teaches a series of online writing classes, details of which can be found at her website. Her most recent nonfiction work is Ad Astra: the SFWA 50th Anniversary Cookbook, co-edited with Fran Wilde.

Near + Far by Cat Rambo

Whether set in terrestrial oceans or on far-off space stations, Cat Rambo's masterfully told stories explore themes of gender, despair, tragedy, and the triumph of both human and non-human alike. Cats talk, fur wraps itself around you, aliens overstay their welcome, and superheroes deal with everyday problems.

Most of the women in this bundle have published science fiction for decades, but Cat Rambo burst onto the science fiction scene less than ten years ago. First she made her name as the editor of Fantasy Magazine, but then we all started noticing her short fiction. Her short stories were memorable gems, the kind of fiction that you can't forget once you've read it.

Of course, as I looked her up to write this introduction, I discovered that she too has written fiction for decades. Her early publications were in the literary mainstream in the early 1990s. Then she disappeared for a while from the publishing scene, only to stretch her wings in sf.

Keep your eye on Cat. Since she burst on the scene, she's published over 170 pieces of original fiction. This collection will give you a taste. If you want more—and believe me, you will— I suggest you support her through Patreon, and get stories non-supporters don't get to see.

The toys were definitely where he had gone awry.

Three runs ago, Linus had acquired a cargo hold full of antique toys, some traveling exhibit going out to the colonies that someone had pilfered along the way. He'd taken them as payment for a poker debt, not realizing how difficult they would be to dispose of.

He'd finally given up trying to sell or swap them, and had stacked the boxes in the furnace hold the bots used for their workshop, reclaiming several spanners and a laser torch in trade. Most of the stuff they'd rendered down to its constituent parts but odd bits had showed up in the latest generation: beetle-bots spiked with yellow plastic dinosaurs; a spindle-legged spider that had used screws and interlocked plastic bits to construct multi-colored limbs; mannequin bots with doll faces and tiny hands.

He went down the corridor, passing two child-sized bots. One clicked out a memory card and handed it to the other, who slotted it into its chest between two gleaming silver stripes.

"That's such a bad idea," he said reflexively in passing. They paid him no attention. He'd ask the ship to speak to them, to emphasize the problems of viruses and corrupted memory, he thought and sighed, using his fingers to comb his wispy hair away from his face.

He would have liked more gravity, but, well, fuel rods didn't make themselves, so he kept the gravity down in brittle-bone territory, telling himself it was just for a little longer. He had more things to worry about than bots, though, if he ever wanted to weigh more than a few kilos ever again.

A beetle-bot scurried across the corridor and up the wall, vanishing into an air duct's opening with a swish of its pink nylon tail.

That had looked like a new model. Fuel rods couldn't regenerate themselves, but the bots could. He'd successfully persuaded them to stick to upgrades for a long time, but it seemed as though the urge to propagate was too strong.

Early on, he'd disabled their repli-chips but they'd reinstated them and started scavenging for supplies to create their offspring, solo projects and elaborate joint efforts. The rainbow spider was one such construction, the product of dozens of the several hundred bots on the ship.

A mannequin-bot clattered out of the kitchen and stamped towards him. A quarter of his height, it covered much less ground than he did, but its pace was quick and determined. He refused to step out of its way, and its head swiveled, showing him a red-eyed screen and a robot obscenity scrolling across it: 2 + 2 = 5.

"Screw you, too," he muttered, and made his way into the galley to tab for some hot water to make tea.