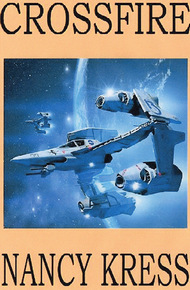 Nancy Kress is the best-selling author of twenty science-fiction and fantasy novels, including Beggars in Spain, Probability Space, and Steal Across the Sky. She has also published four short-story collection and three books on the fundamentals of writing. Kress frequently explores biology and genetic engineering in her fiction, as in her acclaimed Beggars series and her bio-thriller, Dogs. She is a four-time Nebula Award winner and the recipient of two Hugos, the Sturgeon, and Campbell awards. Her fiction has been translated into nearly two dozen languages, including Klingon. She teaches at venues including the Clarion Writers' Program and as a guest professor at the University of Leipzig in Germany.

Jake Holman leads a brand new human colony on Greentrees, a colony made up of diverse groups who do not always get along. That alone provides enough problems for Jake – but then his scientists discover the colony is not alone on Greentrees. Small clusters of primitive humanoids also occupy the continent. But each cluster seems crazy, and there is no fossil record for any of them. So they were brought here – but by whom? And why?

Answers appear all too soon. Greentrees is a petri dish for testing biological weapons. Two alien races, both more technologically advanced than humans, are at war in space, and Jake's struggling colony is caught in the crossfire. One of the races, the Vines, is so alien that no one is sure they can be communicated with at all. The other race is so ferocious it makes Attila the Hun look like a pussycat. Jake must find a way to keep everyone on Greentrees alive. He seems to be succeeding…until more advanced weapons are introduced by both sides, and it's possible that even Earth is in danger.

For the past thirty years, Nancy Kress has published award-winning, breakthrough work, changing the science fiction genre with a wide variety of stories. I prefer her hard science fiction, because it always makes me think while it entertains me. I have yet to read a Nancy Kress story that has left me disappointed.

Fortunately for us, she's bringing back some of her classic works in ebook form, so new readers can find out what the rest of us have known for a long time: You can't talk about the last thirty years of science fiction without talking about Nancy Kress. – Kristine Kathryn Rusch

My God, thought Jake Holman, I did it.

He looked up at the faces watching him from the natural amphitheater of the California hillside. Six thousand faces, white and black and brown and golden, large and small, bare and garishly painted, plain and ugly and genemod beautiful, rapt and wary, with and without headgear. Six thousand people ready to go to the stars. And every single one of them crazy.

"No one thought we could possibly do this," Jake said into the microphone. "No one believed that a small, privately held corporation could actually mount this expedition to Greentrees. No one believed we could raise the money, could build the ship, could equip and staff her. No one believed any of it would happen."

Because no one believed rich people would leave Earth forever to go God-knows-where. The enormous fare, the critics said, was the stumbler. Historically new worlds were explored and claimed by governments and then colonized by the poor and wretched of society: starving Irish potato farmers, persecuted Puritans and Jews, deported convicts. People with nothing to lose. Of course, half of those historical emigrants died aboard ship, and half of the survivors died in the first year from disease and hostile natives. Greentrees was already ahead of the curve – the ship was safe and Greentrees had no sentients, hostile or otherwise. Still, the unknown was always dangerous. So why, asked the critics, would anyone with enough money to buy passage on a starship use the money to leave Earth in favor of a non-existent colony on an unclaimed, unexplored planet sixty-nine light years away?

It had turned out that there were as many reasons for the rich to emigrate from Earth as there were emigrants. The critics had meant logical reasons; the colonists had reasons of the heart.

Now some of the New Quakers were frowning at him as well. Quakers, Jake had learned, didn't believe in miracles. Well, too bad for them. This was the last Jake would see of any of them, except William Shipley, for over six years. Only the Governing Board would be awake for the journey out, and only as many of them for as long as they could stand it.

"But all of us will have one thing in common: our new home. Greentrees. Mira Corporation salutes your choice of that home and wishes you joy of it. To the ship that carries us there: Godspeed."

Jake strode away from the microphone. Applause started, tentative at first, then stronger as the translators put his little speech into Arabic, Chinese, and Spanish. Gail smiled, no doubt relieved that Jake had been brief. A coordinator took the mike and began directing the first group aboard the Ariel.

Jake watched the various groups, as separate here as most of them wished to be on Greentrees, rise from the sere grass and cling to each other before their long cold sleep. The Quakers, almost two thousand of them. The deposed Arabic royal family with its enormous retinue, the women veiled and sitting separately from the men. The Chinese, meekest of the contingents, obeying their leaders without question. Larry Smith's dubious tribe of "Cheyenne," a thousand strong and possibly the craziest of all. Gail's huge extended family, convinced that Earth had only one more century as a life-sustaining biosphere. Plus the scientists, adventurers, star-lottery winners, and miscellaneous millionaire eccentrics.

"Ready, Jake?" Gail said. Her brown eyes shone – unusual for the efficient and pragmatic Gail. Jake looked at her sun-scarred, middle-aged face (no genemods for beauty here), at the triumphant stance of her strong body. Feet apart, torso tilted forward, chin lifted. Like a boxer just before a match.

He smiled at her. "More than ready, Gail. For a long, long time."