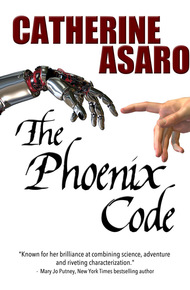 Catherine Asaro is the author of more than twenty-five books, including science fiction, fantasy, and thrillers. Her novel The Quantum Rose and her novella "The Spacetime Pool" both won the Nebula® Award. Among her many other distinctions, she is a multiple winner of the Readers Choice Award from Analog magazine and a three time recipient of the RT BOOKClub Award for "Best Science Fiction Novel. Her most recent books are Undercity, a new stand alone novel, and Lightning Strike, Book I. Her book Under A Bronze Sky is a stand-alone novel due out from Baen in 2017 and is part of the world set up in Undercity.

Catherine is the Director of the Chesapeake Math Program and teaches math, physics, and chemistry. She has been a speaker at various places, including Georgetown University, Harvard, the US Naval Academy, and others. Asa member of SIGMA, a think tank of futurists, she advises the government and business sector as to future trends affecting national security. A former dancer, she founded and served as artistic director and a principal dancer for the Mainly Jazz Dance Company and the Harvard University Ballet. As a musician, she is working on a new CD and collaborating with Arlan Andrews on the song Ancient Ages. She has also completed two terms as SFWA president and during her tenure established theAndre Norton Awardfor Young Adult Science Fiction and Fantasy.

The Phoenix Code by Catherine Asaro

Megan O'Flannery, an expert in robotics and Artificial Intelligence, is hired by a secret military-funded project that has created four self-aware androids. Only one of these androids has survived, and Megan finds herself in danger almost immediately, as she begins her work with the remaining android. Ander, as this android now calls himself, has the capabilities of a high-speed computer, superhuman reflexes and strength, the looks of an Adonis, and behaves like an angry, unpredictable adolescent. When an internationally renowned robotics genius, Raj Sundaram, is also hired for this project, Megan finds herself attracted to him but afraid that Raj may have a deadly agenda of his own. Added to her troubles is Ander's fierce animosity towards Raj.

Kidnappings and pursuits by mercenaries ensue, and all three — Ander, Megan, the mysterious Raj — must fight for their survival, while Megan struggles to comprehend the nature and motives of her strange companions.

A fast-paced thriller of robotics and love by the Nebula-Award-winning author of the highly acclaimed Skolian Empire/Ruby Dynasty series, five fantasy novels, and four sf thrillers, including THE PHOENIX CODE.

I love it too. Her science is off-the-charts spectacular, which I suppose I should expect from a woman with an M.A. in Physics and a Ph.D. in chemical physics, a woman who also found the time to found the Mainly Jazz Dance program at Harvard University. (Oh, I didn't tell you she was a professional ballet and jazz dancer? She was.) All of those influences touch her fiction, and more.

More people should know about Catherine Asaro's writing, which is why I'm glad to include it here. – Kristine Kathryn Rusch

The dusty car settled down in the underground garage with a swirl of grit it had brought from the desert above. Megan waited a few yards away, watching the vehicle roll forward, off the lift. The elevator began its return to the desert above them.

After the car stopped, Major Kenrock stepped out of the driver's side. Tall and lean, he cut a crisp figure in his uniform. Fred was climbing out of the passenger's side. On this side, Claire Oliana got out of the back, smart in her pale blue jacket and skirt.

Across the car, the back door swung open. Someone reached out and grabbed the top of the car frame. Then a man hauled himself out, slammed the door, and walked in front of the car. Unruly dark curls spilled over the collar of his motorcycle jacket. His shoulders looked even broader than Megan remembered and his jeans clung to his long legs. Silver studs glinted on his black leather belt. He stood there with his thumbs hooked in the front pocket of his jeans like an Indian-Gaelic prince with the full-lipped scowl of a surly rock star.

Oh, Lord. Megan hoped she was ready for this. She went to Major Kenrock and extended her hand. "Hello, Richard. Good to see you."

As Kenrock shook her hand, he actually cracked a smile. Fred and Claire came over to say hello as well. The entire time, Megan was acutely aware of Raj watching. When Kenrock finally got around to introductions, she felt stretched as tight as a string.

"You know Dr. Sundaram, I believe." A chill entered Kenrock's voice. Apparently Raj hadn't endeared himself to the major any more than he had to the MindSim execs. Although on an intellectual level, Megan understood why he aggravated people, it puzzled her at a gut level. Couldn't they see the extraordinary mind behind his unusual exterior? Well, all right, maybe "unusual" was a polite way to put it.

She had no idea what Aris, the android, would make of him.

Aris sat at the table in his room, his hands clenched in his lap, with the robot Echo standing behind him. The android had the look of an angry youth who had been locked up against his will while trespassers invaded his home.

Major Kenrock and Raj stayed back while Claire and Fred sat at the table with Aris. He scowled at them, his shoulders hunched. As much as Megan wanted to go to him, she also stayed back. She had to keep out of their discussion, so she didn't influence the results. Besides, she couldn't always jump in to protect him.

Aris shifted his hostile gaze to Megan, then to the straight-backed Kenrock. He stared at Raj for a full five seconds. Then his head jerked. With a glare, he turned to Fred and Claire.

Fred squinted at the android. Even Megan wasn't sure if the "joke" was an attempt at humor or just Aris being literal. In any case, Fred gave a friendly chuckle. "How do you feel?"

"You talk about your feelings with Megan," Claire said. She had a cooler style than Mack.

"Would you talk about them with us?" Fred asked.

After a moment, Claire said, "Do you mind our questions?"

That's new, Megan thought. Giving evasive answers involved sophisticated mental concepts. That Aris was doing it, or at least trying, indicated progress. Though maybe "progress" wasn't quite the right word. He had perfected his sullen mood all too well.

"Does talking to us bother you?" Fred asked.

"What would you like to talk about?" Claire asked.

The android just looked at them. He acted bored, with traces of hostility, yet Megan thought he was hiding fear behind his indifference. He had thousands of facial nuances for each emotion, and he was learning to show several moods while appearing to hide others, yet having all be obvious. Impressive.

Claire and Fred exchanged glances. Then Fred tried again. "Why don't you tell us what you've learned lately?"

"How are your maps?" Claire asked.

Aris glowered at her.

Trying another approach, Fred frowned like a parent faced with a recalcitrant teen. "Answer us, Aris."

"Why should I?" Aris crossed his arms.

Claire glanced at Megan. "This behavior wasn't in your reports."

Aris shot Megan a sour look, as if she had betrayed him, even though they both knew she documented everything. Then he focused on Fred and Claire as if they were interrogators intent on his torture. With his arms still crossed, he said, quite distinctly, "Fuck you."

They all gathered in Megan's office, a room with two consoles, dismantled droids everywhere, a large desk piled with gadgets, and two chairs crammed into what little space remained. She half-sat on her desk, facing Claire and Fred, while Kenrock stood by the console. Raj was leaning against the doorframe, his hands in the pockets of his jacket.

"If Aris turns hostile," Fred was saying, "we'll have to change his caps again. Don't get me wrong; I know he needs to pass through stages as his mind matures. And this is certainly the most affect he's shown. But we aren't talking about an argumentative kid here. He's a walking weapon. We can't risk losing control."

Megan understood their concerns. If Aris ever went rogue, he would take a huge bank of knowledge with him, in both his mind and body. He also linked to many of NEV-5 computers. In fact, he himself was an important node in the NEV-5 intranet. He didn't have access to all of its nodes, especially the war game scenarios they were running, but he'd figure it out soon. It was, after all, part of what they wanted him to design and test.

MindSim was in a race in both the commercial and defense sectors. Other companies were working on androids, including Shawbots, Tech-Horizons, Jazari International, and of course Arizonix. Dramatic advantage would go to whoever developed viable androids first and the advanced human augmentation that went with them. Mercenary groups were also trying to create high-tech warriors. Even partially functional, Aris would be invaluable to people the world over.

Megan also understood why Hastin had made such harsh choices with Aris. She knew now that he had resigned because he saw no way he could complete the project in good conscience. Had he continued using his parameters for Aris's personality, he could have created a dysfunctional, even psychotic, android. Yet he feared to ease the constraints, lest they lose control of the RS-4.