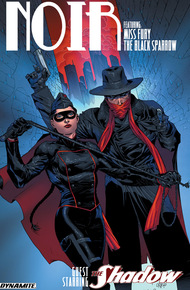 FEATURING MISS FURY, THE BLACK SPARROW, AND THE SHADOW! The Black Sparrow is a criminal for hire, a beautiful thief and mercenary available for assignments all over the world. When a mysterious organization hires her to pluck the Moon Stone from a New York museum, she reneges on her deal and plans to sell the gem for greater profit elsewhere... but her employers are not amused. To survive a deadly retribution, she enlists the aid of her former lover - the macabre crime-fighter known as The Shadow - and the costumed heroine Miss Fury. Will the two femme fatales uncover the secrets of the Moon Stone?