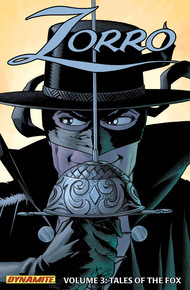 The conclusion to the second thrilling story arc starring Zorro is here, presented in issues #13 and 14 leading right into Zorro Vol 3!

In this third volume of writer MATT WAGNER's iconic retelling of the adventures of America's first costumed hero, ZORRO! The Fox's nocturnal exploits have become the stuff of whispered myth, striking fear into the hearts of the powerful and corrupt and inspiring hope in the souls of the helpless and downtrodden. Word of this daring brigand's attacks on the established regime in southern Alta California have finally spread north…and attracted the attention of the colonial governor, the merciless General Rafael Mancado.

At first dismissing these to be the antics of a simple highwayman, the general gathers different accounts of this elusive rogue… and soon realizes that he may be facing an opponent of far greater impact— one that could upset his entire balance of power! In a nod to the classic film, Roshoman, WAGNER and star artist FRANCESCO FRANCAVILLA weave a series of thrilling tales that present many different sides of this classic hero and his exciting adventures in the cause of Justice! This twice Eisner Award nominated series continues to breathe all-new life and fire into the timeless legend of ZORRO! Collecting issues 15 through 20 of the hit series.