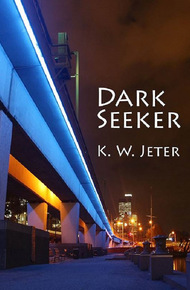 K.W.Jeter is the author of Dr. Adder, Farewell Horizontal, Infernal Devices, Madlands, Soul Eater, the Kim Oh Thrillers series, and other novels. A native of LosAngeles, he currently resides with his wife Geri in Ecuador.

Or that's what he believed. Caught up in the lethal madness of a Manson-like cult, Tyler has lost everything that once mattered to him. Out of prison, on a strict regimen of medications to keep the demons inside his head from returning, he knows he's always one small step away from returning to that dark place and its horrors.

So when his ex-wife emerges from the shadows into which she had fled, and tells him that their son is still alive, kidnapped by another former member of the murderous group, Tyler has some tough, soul-threatening decisions to make. He can take the safe route, that will keep him sane and alive, and just assume that his ex-wife is lost in some psychotic delusion about their dead son. Or he can take the risk that maybe – just maybe – she's somehow telling the truth. He can stop taking the medications that the doctors give him, and go back into that dark world of madness and murder, to try and find the child that had gone missing so long ago. But if Tyler finds his son, will he be able to save him? And what will be left of him when he does?

I've run into K.W. Jeter once or twice in the San Francisco Bay Area and am glad to have made his acquaintance. I've also read his startling stories in the inevitable Year's Best anthologies. He's known for his vivid literary style and dark themes. In Dark Seeker, K.W. boldly tells the tale of a survivor of a deadly cult and his search for his son, another prime example of the outer limits science fiction may achieve and the Philip K. Dick Award Bundle offers. – Lisa Mason

The thin edge of the telephone's ringing worked its way into her ear. It pressed deeper until the black shell of sleep split open. She rolled her head on the pillow, tasting her own hair tangled against her dry mouth.

Her eyes pulled open as the telephone again drilled its idiot clatter from the floor by the bed. The room's familiar outlines — door, closet, chest of drawers — ebbed into the darkness as she pushed herself up on one elbow. The luminous green hands on the alarm clock by the telephone were angled close to one A.M. Another ring was cut in half when she reached down and fumbled the handset out of the cradle. She hoped it hadn't been ringing long enough to wake her son in the other bedroom.

"Hello?" Still half asleep, tongue thick against her teeth, she sank back onto the pillow, the phone across her cheek.

Nothing on the other end — seconds ticked past with no reply. She was about to speak again when the voice came to her ear.

"Hello, Linda." A man's voice, the words with a sharp edge, as if he were smiling as he said them.

She stiffened, raising her head into the room's close silence. The last wisps of sleep drained from behind her eyes. Nobody had called her that, her right name, for five years. Nobody knew.

Still a chance that it was a coincidence, some drunk who had dialed the wrong number, trying to get hold of somebody else named Linda. Her pulse tapped faster in her throat as she wrapped both hands around the phone. "I'm sorry, but —"

"Knock off the shit, Linda." The smile was gone from the voice. "I know who you are." It returned, thin enough to cut. "And you know who I am."

Even through the years between now and the last time she'd heard the voice, she recognized it. The connection to the past linked and grew taut, a current of fear tingling under her skin. "Slide," she whispered.

"That's right," the voice crooned. "Nobody should ever forget their friends, should they?"

She could see him, the night's shapes projected on the blank screen inside her. Somewhere outside the little house, his narrow face was leaning into another telephone, its coiled wire snaking through the interchanges buried below L.A. to her ear. She pulled the blanket closer across her breasts, the warm Santa Ana winds now chill on her skin. "What do you want?" she said.

"Slide —" The chill sank through her flesh.

The blanket fell away as she scrambled out of the bed. The phone thumped against the floor, the voice, tinny and distant, following as she ran out into the hall. "Where is he, Linda? Where's your little boy?"

Light snapped against the walls of her son's bedroom. She stood frozen in the doorway, her hand on the switch, looking at the empty bed, the blankets rumpled and wadded at the foot. A row of toys on top of the dresser, little blue gnomes out of a Saturday morning cartoon show, smiled across the vacant space at her. An airplane on a string rotated in the soft breath of air from the open window, gouge marks from something like a screwdriver showing through the sill's layers of paint to the raw wood beneath.

"Oh, Jesus." She shook her head, a slow twisting on the pulsing knot that had clamped in her throat. "No . . ." She stepped backward, unable to look away from the empty room.

Then she was running down the hall again, her shoulder slamming against the wall in darkness.

She knelt by the side of her bed, pressing the phone against her mouth. "Where is he? Where's Bryan?"

Five years ago, she and the others in the group had called it the hammer — finding the right, the cruelest question, and repeating it over and over. Until the person broke.

"Where's your little boy, Linda?" The smile could break into laughter any second now.

She sank under the blows, curling into a ball as she knelt on the floor, the telephone clutched at her center. The line was a hollow tube into the darkness where the voice came from.

"Please . . ." Her whisper broke through the sobbing that burst in her throat. The taste of wet salt trailed into the corner of her mouth. "Where is he?"

The voice at her ear twisted with mock kindness. "But you don't have anything I want, Linda. Not now."

"You shouldn't have run away, Linda." Hardening again. "It took me a long time to find you. But I did. And now you're on the outside, Linda. All the way out. And you won't be coming in again."

Then the voice was gone, the telephone a dead thing of plastic and wires in her hands. A dull buzz clicked on out of its silence. "No," she moaned, dropping it. The phone hit her knee and slid to the floor, the insect noise humming from the cluster of tiny black holes.

She gripped her legs and squeezed, digging her nails into the flesh, the pain drawing her thoughts tight. Her gasping breath burned cold through her teeth. She stood up and brushed the tangled hair free from her damp face.

Other people, other women whose children were stolen, could call the police; she couldn't. She stared down at the telephone at her bare feet. Even if the police could find Slide — and they hadn't in five years — and get her child, they wouldn't give Bryan back to her. Not in the kind of place where they'd put her. She'd lose her child either way.

She lowered herself to the edge of the bed, then reached down for the telephone and set it on her lap. The silence wrapped around her when she pressed the button to cut off the phone's humming. She knew her ex-husband's number by heart, though she had never dialed it before; she'd found it, the name that used to be part hers, in the book and had let it etch into memory. Now she slowly started to dial.

Before the first two digits rattled past her fingers, she heard the voices at the front door. She froze, listening. Then the noise of the thin wood around the locks splintering. The voices were loud inside now.

She dropped the phone, ran to the hallway, and saw, as the lights blazed on, the police uniforms standing in the front room. The faces above looked back at her. "Linda Tyler?" said the nearest one.

The kitchen doorway was blocked off by another officer coming in from the back. He leaned against the doorframe, filling the space as he watched her with folded arms. She turned around again to the front room, then nodded wordlessly. Slide had told them where she was — she knew that.

As they put the handcuffs on her, then draped over her shoulders the robe they found hanging inside the bedroom door, she recognized the face of the oldest one in the room. He wasn't wearing a dark blue police uniform, but the same shabby brown suit she remembered from five years ago. All the pieces of the past were coming out of memory and forming a solid unbreakable wall around her.

"Hello, Linda," he said. "Long time." The face was creased deeper, but still broad and unsmiling.

The name came back as well. "Kinross," she said. She leaned toward him, her hands trussed behind her, the short chain between the cuffs held easily by one of the officers. "He took my baby. Slide took him."

He gazed back at her for a moment, then turned and brushed past the others, through the door. The tears broke and coursed again as they pushed her, gently as possible, into the darkness outside.