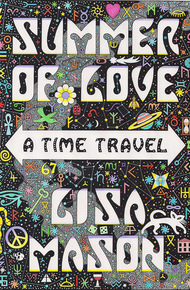 Summer of Love by Lisa Mason

The year is 1967 and something new is sweeping across America: good vibes, bad vibes, psychedelic music, psychedelic drugs, anti-war protests, racial tension, free love, bikers, dropouts, flower children. An age of innocence, a time of danger. The Summer of Love.

San Francisco is the Summer of Love, where runaway flower children flock to join the hip elite and squares cruise the streets to view the human zoo.

Lost in these strange and wondrous days, teenager Susan Bell, alias Starbright, has run away from the straight suburbs of Cleveland to find her troubled best friend. Her path will cross with Chiron Cat's Eye in Draco, a strange and beautiful young man who has journeyed farther than she could ever imagine.

With the help of Ruby A. Maverick, a feisty half-black, half-white hip merchant, Susan and Chi discover a love that spans five centuries. But can they save the world from demons threatening to destroy all space and time?

A harrowing coming of age. A friendship ending in tragedy. A terrifying far future. A love spanning five centuries. And a gritty portrait of a unique time in American history.

I am not now, nor have I ever been, a hippie. I'm glad we cleared that up! I did, however, find the sixties a fascinating period in American history in which to set a science fiction story, a time when lingering Victorian attitudes finally expired and we as a society decisively moved forward into the twentieth century, for better or for worse. I spent over two full-time years researching and writing Summer of Love. I'm gratified so many readers have understood my vision and delighted to include this—still my bestselling book since it was published in 1994—in the Philip K. Dick Award Bundle. – Lisa Mason

Susan Bell clings for dear life to a Ford flatbed truck five years older than she is. Jig-jig-jig up Twin Peaks. High in the hills. Five-thirty A.M. San Francisco slumbering at her toes. Pitch-black beyond feeble streetlights. West wind from the ocean, salt scent of sea dragons. Never smelled anything like it in Cleveland. Wild and free, oh the sea, the sea.

Bone-chill, teeth chattering. Her butt's really sore, three hours or more on Pan Am flight 153. Now bouncing on the flatbed, she feels frostbit all over. Her eyelids sag with fatigue. It was a frantic all-nighter, her daring escape from the oppression of Shaker Heights, Ohio.

"Beam me up!" cries a skinny girl in a cowboy hat.

"Purple haze," warbles a guy with a big blond 'fro.

A transistor radio blares, "If you're going to San Francisco. . . ."

A flag flaps above her, a tie-dyed bed-sheet stapled to a stick. Must be twenty kids jammed onto the flatbed. A scent-fest all their own: patchouli oil, sour sweat, musty second-hand velvet, sexy leather.

Grass? Sharp smoke pinches Susan's nose. She knows that pinch. Last spring she and Nance caught Nance's big brother with some. Dave wouldn't give them a hit, but Nance's cousin Don turned them on to a joint, which they toked, coughing and choking, to Rubber Soul. It was okay, not great. Same for the music. That stuff about a guy threatening to kill a girl if she sees another guy. Gross. She barely got a buzz, but Mom and Daddy would turn forty shades of pale if they found out.

Susan looks around. Who's got a joint?

Some kids are making music, ringing cowbells, clinging finger cymbals, warbling on a flute, strumming awkward chords on an acoustic guitar. Someone sick off the starboard bow, Captain Kirk.

Susan clutches the leather purse her parents had given her for Christmas and a blue canvas overnight bag. Teddy bear comforts, familiar and safe. The purse holds a hundred-and-fifty bucks, the overnight bag another hundred-twenty and change. Her under-the-table wages earned after school at Mr. G's art supply store. Plus the hundred-dollar bill for when Mr. G pressed his hand on her tummy, down low, asking if she'd gotten her first period yet. The worst of it was, she just had.

Wouldn't Daddy, with his groovy new dentist's office, flip his lid if he found out a dirty old shopkeeper had felt up his daughter. Well. That was just one more thing Daddy would never find out. He'd make things worse for her than for Mr. G. She would be equally to blame, if not more so. She always was.

The driver of the flatbed truck slammed on the brakes just as she'd stepped off the 6 Parnassus bus running a red-eye down Market Street. He called out, "Hey, you. Chick with the bag. What's your name?"

Susan shivered, terrified and thrilled. What's her name? She was ready with the alias Nance had scrawled on the postcard. Clever Nance. When they were little kids, they always wished on the first star of the evening. Like Jiminy Cricket in Pinocchio.

"I'm Starbright," she called back.

"Far out," the driver said. "Climb aboard, Starbright. You're either on the bus or off the bus."

On the bus, off the bus? She didn't understand, but she climbed aboard anyway with an unruly, chortling horde barreling through the dawn like there's no tomorrow.

Now they crest Twin Peaks, top of the town. The truck sputters off, and the kids all pile out. Bongo drums quicken Susan's pulse. Plum incense spices the scent of sea dragons. People everywhere; so many! There must be a thousand or more milling in the morning mist.

Oh, she and Nance used to sneak away to Coventry Street where the boys slicked down their Beatle bangs and the girls in miniskirts showed off their hot pink tights. Cool for Cleveland.

But these people! Who are they?

People stranger than the space aliens on Star Trek. The Lone Ranger stalks past in a fringed jacket and a Stetson hat. Another man fusses with his jewelry. Not the cuff links, tie tack, and plain gold wedding band Daddy wears. This man—a man!—is bedecked in beads, dangling earrings, silver rings on every finger. A banshee brushes by. No hair-spray for her, no mod-white lipstick. Omigod—and no undergarments, either, beneath her silky sheer dress. Susan lowers her eyes; nipples, a crotch. Other women climb the hill in buckskin shifts or Hindu saris, feathered headdresses, gypsy scarves of red and purple.

Other people stride through the crowd, too. Guys in mod suits balance hulking, long-snouted movie cameras on their shoulders, jot notes on clipboards, whisper into microphones with looping wires plugged into reel-to-reel recorders the size of Susan's overnight bag.

The fringed and feathered folk ignore the cameramen with regal disdain or pose with extravagant gestures.

An electronic eye whirls into Susan's face. "We're from Hollywood, babe," says a guy with fluffy sideburns from ears to chin. "I'm a producer, we're making a flick. You wanna take off your top? Come on, let's see some titties."

Gross! Susan is stunned. He's looking at her—at her—like she's a space alien, too, and she'll be watching herself on Star Trek reruns on TV tonight. She hides her face with her hand. The enormity of her daring escape strikes her for the first time—what if Mom and Daddy see me on TV?

Her breath catches, and she darts away from the cameras, away from the crowd, seeking refuge in the shadows west of Twin Peaks. When she's alone at last, she stops, heart thudding, and glances down the hillside.

A girl in a long, black cape stands downslope in the dim dawn light and swirling fog. Over her head she's drawn a large peaked hood, hiding her face and her hair.

The moment Susan sees her, the girl stirs, turns, and looks up at her. In another heart-thud, Susan sees it's like looking in a mirror.

Suddenly she's awake, and there's no mistake. It's her. Her own face looks back at her from beneath the hood.

The girl smiles, teeth glinting, but it's all wrong. Little upside-down triangles glitter beneath her lip. Her eyes glow like red-hot coals, but a freezing breeze blows upslope. Her cape billows, sweeping curves and sharp points like the wings of a bat. A blackness deeper than the receding night forms an aureole around her, as though she stands in the mouth of a cave in the hillside.

But no, not a cave. Gleaming panels surround the girl like the hull of a machine, pulse into view for a moment, then fade away. Weird electricity crackles, black sparks sputter.

The girl with her face holds a rod or a staff in her left hand. She slowly raises it and points the knob on top at Susan.

Bitter cold surrounds Susan. An odd force like invisible fingers pulls at her.

Confused, Susan takes a step, and the hillside falls away beneath her feet.

Oh! She scrambles for a foothold, clawing at the dirt. Her purse bangs against her thigh. Through sheer luck, the strap of the overnight bag snags on a sapling tough enough to hold her. She digs in her heels, halting her fall before the hillside angles away to nothing. Scratches, scrabbles up the slope, pure fear propelling her. She hoists herself back onto the ledge.

The girl watches, then steps back into the fog.

God! What was that?

Susan gathers up her purse and bag, and runs, mouth dry and hands shaking.

Upslope, to the dawn side, where people are gathering and chanting and laughing. Pink sunbeams filter through the fog as the solar fireball edges up over the forests on the eastern hills. People shriek and sigh as if they've never seen the sun rise before. Cameras click and whir. A firework rocket arcs up, and flares form red and white blossoms of light.

A mustachioed man stands before the crowd like a makeshift priest, sporting a necklace of chicken leg bones strung with a carved wood ankh. He beckons toward the sun and proclaims in a voice thick with wonder and joy,

"Let the Summer of Love begin!"