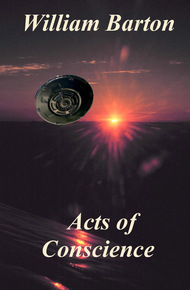 William Barton was born in Boston, Massachusetts, in 1950, and grew up in Colorado, Utah, and Virginia. He graduated in the bottom tenth of his high school class and went on not to get degrees from Northern Virginia Community College (Liberal Arts), the University of New Hampshire (Asian Studies), and Portsmouth Vocational-Technical College (Welding). He was married and divorced, afterward embarking on the adventure of single parenthood, an opportunity afforded few men in those long-ago days.

During the first part of his career, Barton became a high-end mechanic, ending up working on nuclear submarines at Portsmouth Naval Shipyard. With the advent of modern computers, he switched to an IT career, eventually winding up as a free-lance software architect, working for all the usual companies. He retired with considerable relief in 2012.

In his spare time, Barton wrote science fiction novels and short stories, beginning with Hunting On Kunderer (Ace, 1973). Over time, he managed to write dozens of books and stories, most of which are available as eBooks nowadays. Acts of Conscience (Warner, 1997) won the Special Citation of Excellence from the Philip K. Dick Award, and his short story "Age of Aquarius" (Asimov's, 1996) was a Hugo Award finalist). He is currently working on the Venusworld series, beginning with the publication of Book 1, Crimson Darkness.

Acts of Conscience by William Barton

Acts of Conscience is the story of Gaetan du Cheyne, Class 10 Spatial Machinery Mechanic at the great spaceship refit station known as Stardock. Gaetan du Cheyne. No mother, no father, no children, no wife, no friends, no home, no nothing. Just a job. An empty man, a hollow man, paid well enough for his complex skills that, when he's not getting drunk by himself and consuming a steady diet of net porn, he gets to play the stock market. Until, one fine day, in the middle of a widening economic crisis driven by sudden technological change, he finds himself in possession of a prototype FTL starship, and goes out among the worlds in search of... something. Anything. Maybe only the lost, empty dreams that were all he had as a child, dreams that deserted him as an adult.

And now, Gaetan du Cheyne, malcontent and misfit, nobody's friend, is about to become the only man who can save the human race.

I appreciate the challenge for an author to depict, and depict deeply, an "anti-hero." In Acts of Conscience, he's a way politically incorrect dude. But William Barton pulls it off beautifully and his tale of an orbital mechanic, a guy who fortuitously scores a spaceship and takes off for the stars, is a dark journey of the soul as much as a space odyssey. I'm excited to include another genre-expanding title in the Philip K. Dick Award Bundle. – Lisa Mason

I flooded the suit's limbs with power and life, watched my pale shadow, cast on the front of the locker bank, fill up with pastel sparkles, with tiny moving rainbows. Felt the suit harden against my body, molding itself to my form. Felt it fill up with its own awareness, felt it flutter against my chest, like the beating of some distant, impersonal heart. Outside then. Outside with all the others, slipping through the shop's airscreen, metadynamic force field reaching through the suit to tickle on my skin, a soft feather touch.

Stardock stretching away in all directions, a regular, three-dimensional array of pale yellow girders, dotted here and there with little buildings, habitats, work centers, many-armed cranes crawling about like so many spiders, vast spiders, spiders the size of small asteroids.

I could look out in any direction. See square after yellow-lined square, each smaller one set within the larger square that surrounded it. Some squares blocked by broken-down, half-dismantled ships. Others empty. Empty right through to... black sky. Stars blotted out by the brilliant lights of the work teams. By the light of the cranes. By the light of the brilliant sun, Old Sol hanging right over there... the suit whispered 134,702,092.8 kilometers in my head. In the other direction, one tenth as far away, Earth was a tiny, bright blue-white circle, Luna a much smaller, very much dimmer reddish-gray spot by its side, almost invisible.

I couldn't really see well enough to know, but from her position relative to Earth it might be nighttime over the farside, darkness long fallen over crater Volterra and the Meadows of Dan. Maybe some little boy was lying on a hillside, cool wind ruffling his uncombed hair, looking up at the stars.

I can't have been the only one.

Rossignol, like a ghost in my head, ghost in everyone's head just now: "Let's go, boys and girls. Clock's ticking."

I let the suit read my mind, let it pass my wishes on to the equilibrimotor's little brain, felt that distant pulse start to throb against my chest, harder and harder, like the strengthening beat of powerful wings, wings of fire, sculpted from impalpable lines of force, and we began to move out into space, out into a maze of struts and girders and broken-down ships, hanging between Earth and Sun, hanging in a void that surely pervades all of Creation.