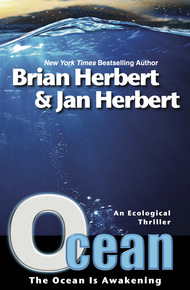 Bestselling author Brian Herbert and his wife, Jan, have combined their talents to create an epic ecological fantasy novel. In 2024, Earth is consumed by a great War of Ocean Liberation: a military force of sea creatures attacks naval installations, shuts down shipping lanes and fishing operations, and destroys offshore oil-drilling rigs. Huge blue whales, sharks, dolphins, and even monstrous creatures thought to be extinct—all strike with ferocity and surprising strength. The marine armada is led by hybrid, transformed humans who call themselves Sea Warriors, ocean-rights zealots who can swim to the deepest regions of the sea and live off the bounty of the waters.

Their commander, Kimo Pohaku, announces his startling intention: The complete liberation of the seas from human control. Finally, the ocean is fighting back, but it might be too late....

Brian Herbert, and his wonderful wife Jan, have been friends for nearly two decades, and of course Brian and I have written numerous Dune novels together as well as our Hellhole trilogy. At my WordFire Press, we publish all of Brian's backlist, and he came to me with OCEAN—I've never seen him so passionate about a project. The sea itself fights back against all the pollution and abuse humans have inflicted upon it. – Kevin J. Anderson

Because of the passage of more than four hundred years since the great War of Ocean Liberation, some of the details have been lost to history. The part-fish, part-human Sea Warriors who led the revolt did not find it convenient—or necessary—to write everything down during a time of tremendous turmoil and upheaval. Nonetheless, certain over-arching facts are indisputable, dominated by one: This heroic group sought to gain control over the entire world ocean, so that they could give it back to the sea creatures inhabiting it.

All of us know the results of that war, but other details are sketchy, and subject to discussion. Owing to a lack of information about the day-to-day actions of the principals in this fantastic saga (especially with respect to Kimo Pohaku, Alicia Ellsworth, and Gwyneth McDevitt), this is a historical novel that draws upon news reports of the time, eyewitness accounts of their lives, and family journals that have survived the decades—in all, reports by people who were able to obtain some of the details of what was occurring beneath the ocean waves of the planet.

We can say with a certainty that the account you are about to read accurately reflects the personalities of Kimo, Alicia, and Gwyneth, and correctly portrays many of the events in their epic struggle—although for the purpose of telling such an important story, the authors have found it necessary to make educated assumptions about certain specifics, with a minimum of added material.

This, then, is their story, and the story of their brave followers—sea creatures, human-marine hybrids, and untransformed human beings—all of whom dedicated themselves to the cause of ocean liberation.

Let us go back in time now, more than four centuries to the year 2024….

Just beneath the surface of the aquamarine sea, the man swam more than two miles without surfacing for air, though he wore no breathing equipment. His arm strokes and leg movements were smooth, propelling him rapidly through the warm water. He had splendid tattoos of marine animals on his body—a tiger shark on one bicep and a bottlenose dolphin on the other, with a giant octopus tattoo adorning his back, and the image of a moray eel that looked as if the animal was draped over his shoulders. One leg bore the tattoo of a hawksbill turtle, and the other a Portuguese Man-of-War. Even the backs of his hands were tattooed—a marlin on one and a starfish on the other.

Following Kimo Pohaku were immense white sharks, spotted stingrays, barracudas, and swordfish, all thick in a "vee" formation, turning whenever he did, staying with him. He thought it was strikingly beautiful in this underwater realm, where sunlight filtered down from the shimmering surface above, and he had his aquatic friends.

Kimo often felt like a child when he swam, filling his eyes and other senses with the wonders of the sea. But he felt great responsibilities as well, and had learned many important things. He knew the Hawaiian names of the species with him: niuhi, hihimanu, kaku, and a'uku. All of these animals were potentially deadly, but he had no fear in their presence, knowing they would not harm him.

Aside from his abundance of tattoos, Kimo looked like an ordinary human being, a young, dark-skinned Hawaiian land dweller—but his appearance concealed functional gills behind the ears, under the hairline. He had other special characteristics as well, including a swim bladder that enabled him to dive deep in the water, and an ability to navigate by identifying variations in the Earth's magnetic field—things he kept secret from people he knew on the land, except for his own small family. Underwater, he could also hear things beyond the auditory range of a human being—including the low- and high-frequency sounds that marine animals made when communicating with one another or looking for prey.

Due to his enhanced body, Kimo could remain immersed in the sea indefinitely, and dive as far down as he wanted—thousands of meters if he wished to do so—all the way to the deepest regions of the ocean without being harmed by the very cold water, or crushed by the extreme pressures at those depths.

Ahead, he saw the white and iridescent blue of a huge lion's mane jellyfish, in apparent distress. Slowing as he approached it, he let the creature enfold him in its long tentacles—organs that could sting and kill with lethal toxin in a matter of minutes. As expected, the animal did not harm him—instead, it caressed him gently, then let him go and swam away. But not rapidly, and not with a natural motion. Kimo also noticed that the creatures accompanying him now were troubled and erratic in their movements, not swimming in their usual effortless manner.

Troubled by this, Kimo dove deeper, surging into the depths with powerful underwater strokes, leaving the bright tropical sunlight above him and entering darker, cooler water. At first his companions stayed on his tail, but then he noticed some of them beginning to struggle, and falling out of formation.

He'd been in possession of extraordinary swimming abilities since his earliest memories, and he used to wonder if he was a member of a unique species of human beings with gills and other disguised improvements. But he'd never met anyone like himself. He'd been born in these very waters after a sudden storm capsized a small boat his pregnant mother had been aboard. She had perished during child delivery in the wind-tossed sea, leaving the newborn boy floating beside her body, helpless in the water and connected by the umbilical cord.

Strange and mysterious events had occurred that day, things Kimo thought of often. As a baby he should have died along with his mother, but miraculously he had survived, and had been able to see clearly quite quickly. He remembered his own umbilical cord being cut by a swordfish, while sharks swam around him protectively. Later he would realize that his umbilical cord was tied tightly against his belly, in perfect fashion, but it was a detail he did not see happen, or at least, he could not recall it.…

As a result of his unusual birth and ensuing incidents, Kimo had a very special connection with the sea and the life forms inhabiting it, enabling him to notice the strange behavior of marine animals. In recent weeks this had been increasingly evident in the waters around the Hawaiian islands, where fish and other sea creatures were showing signs of sluggishness, agitation, disorientation, and diminished reproduction. It particularly troubled him that humpback whales had not come to the warm, shallow waters around the island of Loa'kai in the winter to give birth to their young, the first time they had missed doing that in Kimo's lifetime.

The local news had not been carrying stories about any of this, and Kimo knew why. The influential tourism industry was keeping it under wraps, hoping the problem would go away—and business leaders had the Hawaiian press in their pockets. But Kimo knew the truth, and so did his adoptive father, who lay gravely ill at home.

Just that morning from his sickbed, Tiny Pohaku had spoken about bleached, dying coral reefs, global warming, species depletion, pollution, and other problems that adversely affected the world's ocean, a vast body of water that covered most of the Earth's surface. Then the old fisherman drew a disturbing analogy when he said, "I don't have long to live, and neither does the sea. I feel myself dying with it."

Now, swimming back toward the surface through the increasing brightness of sunlight in the water, Kimo noticed a male porpoise going in slow circles just beneath the surface, waiting for him. He could tell that, and quickly he noticed why. The animal had a bloody, injured dorsal fin, and Kimo could only speculate on what had happened. The propeller of a tourist boat might have struck it; the vessels were always trying to get close to sea life for viewing.

Kimo broke away from the formation with the other sea creatures, and for a time he swam alongside the porpoise. Reaching over, he stroked its back, taking care to avoid touching the injury. Then, as the two of them slowed in the water and drifted upward toward the light, Kimo touched the injured area gently, and spoke to the animal soothingly, transmitting his thoughts through the water as he always did. The creature did not show any fear. It became very calm, and presently Kimo saw the skin healing over, leaving no sign of the injury. He had done this numerous times.

Moments later the porpoise darted away, testing the repair that Kimo had performed.

He only wished he could do the same for his father, but that was not possible, because the dying man was a land creature.