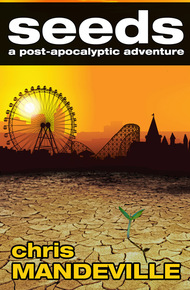 After growing up in California and graduating from the University of California at Berkeley, Chris married a U.S. Air Force officer and moved from state to state, as well as to British Columbia, before settling in Colorado. She now lives in the woods of the Rocky Mountains with her husband, three sons, her service dog Finn, two new puppies, and an assortment of cats. Chris is proud to have served for more than ten years on Pikes Peak Writers' Board of Directors, five of those years as president, and she remains an active volunteer in the nonprofit sector helping writers, military families, and service dogs. Chris is a writer of science fiction and fantasy, as well as nonfiction books for writers. She's taught writing workshops to hundreds of writers, from beginners to advanced, on topics such as Backstory, Story Planning, The Sweet 16 First Lines, Name-storming, and more. Her published works include Seeds: a post-apocalyptic adventure and 52 Ways to Get Unstuck: Exercises to Break Through Writer's Block. For information about her books, upcoming events, and tips for writers, visit www.chrismandeville.com.

Forty-eight years after a catastrophic solar event destroys all life and technology on the planet's surface, nineteen-year-old Reid Landers lives in the old NORAD facility deep inside Cheyenne Mountain with other descendants of Originals, barely subsisting on canned food and rats. For all they know, they are the last hundred souls on Earth...until Reid meets the first stranger he has ever seen, a stranger with a grown apple. This catapults him on a journey to California to find seeds for his people, an adventure fraught with skin-carving pirates, twisted missionaries, and mercenaries on Rollerblades. Even if Reid can outwit the despot leader of "Lost" Angeles and resist the siren's song of a beautiful con artist, there may not be any seeds left to find. And his people—including the woman he secretly loves—might not take him back.

Chris Mandeville is a close friend and active member of the Pikes Peak writing community. She is generous and helpful, and always participates in writing activities, including my Superstars Writing Seminar. (She is also just as generous in offering her sons for piece work around our house!) I was looking for one more book to include in this bundle and I put out the word, not even thinking about Chris. But she had something that was right up the proper alley! – Kevin J. Anderson

Reid Landers leaned against the brick wall in a sliver of shade, shifting his rifle uneasily as the transgressors threw trash on the fire. He belonged in the infirmary with his patients, but Commander Vega made everyone rotate through some form of guard duty—medics, clergy, even the Originals. Vega said everyone was a soldier. They had to be ready, prepared at all times.

Prepared? For what? No one had seen a stranger, much less a Raider, in forty years. The Mountain didn't need guards, and neither did the transgressors. They served their tours for swearing, being late to church, or whatever infraction they'd committed, trying to earn official forgiveness and get back inside the Mountain. Besides, where else would they go?

Reid knew what was beyond the fence. Nothing.

He hadn't seen much of it himself, but his brother Brian had. There were no plants, no animals, no people. Certainly no Raiders. Brian and Kayla had patrolled everything this side of the Burn and found only the bones of the people from the Before. There was nothing left but dust-filled houses, rusting cars, scuttling rats, and a dwindling supply of canned food

There was nothing to run awayto.

But even if there were, no matter how much Reid wanted to escape the confines of Vega's military and the oppression of his father's church, he wouldn't leave his patients.

"Reid!" Kayla ran toward him from the mouth of the tunnel, blond hair streaming behind her, not in its usual tight braid.

"What's wrong?" It had to be serious. She'd barely looked at him since Brian's funeral.

She stopped, out of breath, her face gaunt, her green eyes angry and red-rimmed. "It's Bethany. She's worse. A lot worse."

Reid pictured her little sister lying in the infirmary and had to clench his teeth to keep from cursing Vega out loud.

"She's asking for you," Kayla said.

There would be hell to pay, but he slung his rifle on his back and sprinted up the short stretch of Norad Road with Kayla matching his stride. At the checkpoint, the guards waved them into the tunnel. With each step, the air grew cooler, but at the same time heavier, more oppres­sive. They covered the quarter mile to the open blast door where Kayla's cousin stood guard. Her somber expression spurred Reid on.

On the other side of the door, the smells of antiseptic cleaner and trash assaulted his nostrils. They ran across the cavernous room past a squad of Remotes at their lockers gearing up for patrol. Someone shouted a warning, but Reid didn't slow. Vega was already going to sentence him to tours for leaving his post, but he didn't care if he got hit with another week, so long as he got to Bethany before it was too late.

He flung open the main door and ran faster, though he dreaded what waited at the end of the corridor. A week ago, Bethany broke her leg on the playground. Healthy people recovered from worse, but Bethany had never been one of the healthy ones. Without reserves to draw on, a broken bone could be a death sentence. Reid had requested extra nutrition for her, but it had been denied. The little girl was a fighter. He had hoped that would be enough.

At the end of the hall, a tech came out of the infirmary with a gurney. Bethany's gurney. She was being moved to the "family room," more commonly known as thedying room.Reid never called it that out loud, but that's what it was and everyone knew it.

Doc wasn't there, but Reid didn't really expect him to be. Doc rarely went in the dying room. Vega looked the other way while Doc hid in his office and drank, leaving Reid or another medic to tend to the families and pronounce the dead. It used to make Reid furious, but now he felt sorry for the old man.

As one of the Originals, Doc had seen more death than a sober man could bear: hundreds of thousands in Colorado Springs from radiation poisoning after the massive sun flare; more than half of the survivors slaughtered by Raiders; then the steady dying-off of the remainder since. Now they were down to a hundred souls and, for all they knew, the only ones alive on the planet. The last of humanity was dying out, and Doc couldn't watch anymore. So he did what he could for a patient while there was still hope, then drank till it was over.

Reid followed the gurney into the room where Kayla's mom stood wringing her hands, her thin gray face wet with tears.

There was both anger and pity in Kayla's voice, and Reid couldn't blame her for either.

The tech handed him Bethany's chart as she followed Kayla's mother out, but Reid didn't open it. He already knew what it would say.

He joined Kayla at the bedside and took Bethany's hand. "Hey, sun­shine."

"Where were you, Reid?" Bethany's voice was a hoarse whisper.

"It doesn't matter. I'm here now, and wild-eyed Raiders couldn't drag me away."

Bethany gave a weak smile and Reid forced himself to smile back. Her eyes closed and her breathing slowed.

Kayla dropped to her knees and buried her face in Bethany's blankets. Reid stroked her hair and wished there were something he could say. The best he could hope for was a quick passing. He didn't want Kayla to see what would happen if Bethany lingered. His cheeks burned as he pictured Vega pressuring him to hasten the process so the dying child wouldn't use up any more resources.

Reid wouldn't do it. He never had. Even if Vega bullied his father and Reid no longer had the protection of the church, he would stand his ground. Especially when it came to Bethany. Nothing could make him hurt Kayla like that.

"Tell me a story about the stars. The one about the princess."

Kayla lay down alongside her sister, slipped her arms around her and held her gently.

Reid settled into the chair by the bed. He held Bethany's hand and told the story of Cassiopeia until her pulse faded to nothing.

Kayla's eyes were closed, her chest slowly rising and falling. She looked so peaceful, Reid hated to wake her. He wished he could spare her the pain that would return the moment she knew Bethany was gone.

First Brian, and now Bethany. He didn't know how much more Kayla could take, how much morehe could take. His brother's death had been an accident, a freak, tragic accident. But Bethany was the third child he'd lost to malnutrition in the last month. If they didn't find some other source of food soon, it wouldn't be long before they were all gone.

Reid leaned back in his chair and watched Kayla sleep. The news could wait a little longer.