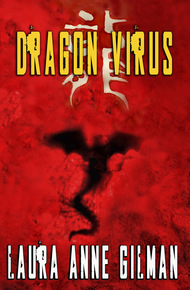 It began soon after the Millennium. Reports of newborns with strange malformations, too weak to live . . . caused by a single genetic mutation. Or, as the press quickly dubbed it, the Dragon Virus. Scientists predicted that it was an evolutionary dead end; that the mutation would burn itself out quickly; that it was nothing to be worried about.

Every racial type. Almost every continent. No known cause. No known treatment. No idea where even to begin.

Everything was about to change.

A completely different type of plague is in Laura Anne Gilman's DRAGON VIRUS. Laura Anne was an editor at Ace/Roc for many years and discovered (or was duped into believing) that the real money is in freelance writing. We have crossed paths for most of my career, and when I saw this book she had indie published, I thought it would be appropriate. – Kevin J. Anderson

You accept the absurdity of the situation because it is said so seriously. It's only later, when you're out of the scenario, when you've had time to cool off and calm down, you can type up the report and get some distance from it all.

Religious hysteria. Post-millennial delusions. Things were easier back when it was only drugs. You just had to hold their hands, keep them from jumping out the window until they came down.

"Hear you had a good one." Molly leans over the partition, sleepy blue eyes barely visible under the brim of her gimmie cap, the trooper logo covered with a fine layer of red grit. She's been off-roading; must have been in on that pursuit-of-suspect I heard over the radio. Nice job — money went into the river, perp tried to off himself with a cop-induced suicide. No great loss to the gene pool. She's pulled the dust mask down, and it hangs around her neck, government-issue trendy, what all the best cops are wearing.

One word speaks a multitude. Wheelies aren't the worst of the god-needies, although I'm not fond of any of them. The RV-loaded caravans of holy rollers — wheelies, for short — will at least pack up and go away, eventually. Just not before they've riled the locals with their Bible thumping and lamentations. Like there wasn't enough of that home-grown, they have to bring it across state lines?

"Something about dragons?" She isn't going to go away. This is more interesting than Wheelies usually get. We overlap shifts; first-source story will get her an audience for the retelling, later on.

"Teenager took the Rapture, middle of the 7-11 parking lot. One of theirs, thank god." Hell to pay when a local decided to go Wheeling. "Screaming about dragons rending the flesh from his bones."

"Bleeding?" All the details, man. All the gory details. I oblige her. "Oh, it was a bonafide Rapture, yeah."

Raptures started way back before anyone knew what was up. Before the air started souring, before the red tides and blue tides and whatnot washed up on shore. Before the babies starting being born wrong. Maybe Wheelies and their ilk came up around them, maybe it was a case of like finding like, and feeding on each other. Suddenly everyone knew someone who'd been in on a Rapture. It was a fad. A passing insanity. Only it didn't pass.

I know the signs: eyes wide, staring at something I don't want to see. Arms uplifted, twitching like a marionette, face scrubbed-clean fresh, mouth slackjawed and smiling like it wants to scream. He's fourteen maybe, max. Carrot-topped, cut brush-short. Sharp nose, tanned skin, jeans and a football jersey in blue and red, number 7. Lucky seven. He should be in school, or ditching school, not riding the roads looking for some glorious ending always over the next hill. A plastic bottle of pop lies at his feet, a dark puddle staining the gray-white of his sneakers.

Every Rapture's different, I'm told. Some see angels ravaging the world, others demons, others plain old fire and brimstone. It's all about cleansing, apparently. Only the means are different. I wonder, sometimes, if they ever just see god pouring in some bleach and flushing us down the drain.

Across the parking lot his gaze targets in on me, enough to make sweat jump out under my collar. I pull the dust mask down off my face, wanting to make sure my words are clear. My gun feels heavier, somehow, and my hand goes to it instinctively, one finger resting just below the strap, aching to flick upwards, release it.

He dances in place, slow rising steps like those horses they show in parades. His arms rise higher, white-fleshed forearms blinding in the sunlight, palms up, beseeching something on behalf of humanity that can't follow him.

"Can you see them?" he asks again, turning, directing the question to me.

"No, son, I don't." Never lie to a Rapture. Bad Things happen. If you believe nothing else, believe that. "Now son, let's get you somewhere you're not scaring the ladies."

No ladies here, just a tired-eyed clerk who could be anywhere from eighty to dead for all the curiosity she shows, dragging on her cigarette and not watching the show, two pre- pubescent females with the boy's red hair who were clearly enthralled with their brother's contortions, and a couple of the local girls slouching with what they thought was style with their boys of the week against a rust-ridden Volvo wagon older than they were.

"The sky," he says, a conspiratorial whisper, as though he expects me to do something about it, then looking upward with that same slack-jawed, slightly unhinged look. The one people get when reality tilts and slides off the table. "The sky is full of dragons."

One of the kids leaning against the car snickers, but I risk taking my attention from the Rapture long enough to check the sky. Blue, clear — not even enough cloud to create a dragon-image.

I look back, just a second, and he's in my face, looking up to stare me in the eye, his breath hot and rancid, like onions and mud. "The sky is full of dragons . . . and the dragons are filled with stars. Fear them, oh fear them, for they are no friend to man." And then he starts to scream.