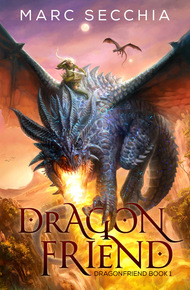 Marc is the bestselling author of over a dozen fantasy books. Born in South Africa, he lives and works in Ethiopia with his wife and 4 children, 2 dogs, a rabbit, and a variable number of marabou storks that roost on the acacia trees out back. On a good night you can also hear hyenas prowling along the back fence.

When he's not writing about Africa or dragons, Marc can be found travelling to remote locations. He thinks there's nothing better than standing on a mountaintop wondering what lies over the next horizon.

Stabbed. Burned by a dragon. Abandoned for the windrocs to pick over. The traitor Ra'aba tried to silence Hualiama forever. But he reckoned without the strength of a dragonet's paw, and the courage of a girl who refused to die.

Only an extraordinary friendship will save Hualiama's beloved kingdom of Fra'anior and restore the King to the Onyx Throne. Flicker, the valiant dragonet. Hualiama, a foundling, adopted into the royal family. The power of a friendship which paid the ultimate price.

This is the tale of Hualiama Dragonfriend, and a love which became legend.

Have you ever been impressed by someone you've never even met? Someone that isn't a celebrity or a famous professional. Just a solid person doing a great job in a pretty tough field. That's how I felt about Marc from the moment I saw his Dragonfriend series. He's a top-notch Indie author who clearly not only cares about his audience but also about the presentation of his work – the artwork for his series is stellar after all.

Aside from my desire to show my appreciation for a fellow Indie author who I knew was doing great things, I also found out later on that Marc has excellent taste. Considering that he is an aficionado of the Dragonriders of Pern series and paid particularly astute attention to Anne McCaffrey's tendency to craft 'fully-formed dragon characters' I knew that I had stumbled on one of those most perfect individuals for a bundle curated with lovers of dragon-kind in mind. – Terah Edun

When a Scream split the early evening sky, a dragonet lurking nearby almost spilled his mouthful of lemur intestines. What? He hated to be distracted from the spoils of his hunt. His green eyes narrowed against the glare of the sky-fires, the eyes of the Great Dragon which seared the world with their unrelenting gaze. One of those two-legged ground-creepers was trying to fly? Loops of grey intestines dangled either side of his jaw as he gaped at this spectacle. The creature thrashed its spindly, useless appendages as it plummeted from one of their fat flying balloons.

How awkward and ungainly! Imagine trying to fly with no wings?

A premonition prickled his scales. The dragonet's mirthful gurgle snagged in his throat, replaced by a hissing stream of fire. Wrongness. The thin wail of the creature's terror.

Before he knew it, Flicker sprang off the obsidian boulder he had adopted as his table, knocking his favourite meal into a patch of nearby jiista-berry bushes. He flapped his wings madly, taking him over a rocky outcropping before a neat flip upended him. Tail jutting skyward, he chased the creature down the four-mile vertical cliff which demarcated the south-western periphery of Ha'athior Island. Faster! Pump the wings! In seconds he whipped by acres of lush overhanging trees, a dozen dark-mouthed caves and a flight of red dragonets practising their song-dance of praise to the Magma Dragon, which roared beneath the roots of their Island.

At two and a half feet in wingspan, and just under two feet from muzzle to tail-spike, Flicker was no unusual size for a dragonet of his nine summers of age, but his smoky green colour was unique amongst his kin. His egg-mother certainly thought him very strange, especially how he studied the ways of the creatures above the cliffs. It's dangerous for dragonets up there, she scolded him. The two-legs put dragonets in metal cages.

But the mighty Dragons of the mountain peaks sang to his spirit, and the doings of the two-legs were endlessly fascinating. How could such stupid, flightless creatures force metal and stone to bend to their will? They made absurd squiggles on animal-skin scrolls, and were so hopeless at hunting, they had to keep giant ralti sheep penned up next to their stone warrens. They travelled with their clumsy flying balloons and fought other Human warrens with metal sticks, instead of working together under a warren-mother's wise guidance.

Well, this one's idiocy had to trump them all.

A strange-smelling red liquid splattered his face as he tucked his wings in to accelerate, just a few tens of feet away from the creature now as it tumbled into the void. Flicker gasped with the effort. If it could just slow a little, maybe extend that skin covering to make wings, the creature might slow its headlong fall. It made another screeching noise which set his fangs on edge.

Down, down it fell. The cliffs blurred past, the heat increasing by the second, the rocks and long, trailing vines flashing past his wingtips. Flicker inched closer, measuring the creature's trajectory. It would strike near the base of the cliff, splattering its brains out on the slope before being picked over by windrocs and other aerial predators. Would its brains make a tasty meal?

Regardless, his seventh sense impelled the dragonet onward. He had to save this creature.

Reaching out with his paws, Flicker gripped the creature's body covering and began to flap mightily. Great eternal fires, it flew like a rock! It did not even pretend to help. Obstinately, he struggled on, ignoring the pain in his wings and joints. If he could just change the angles enough, drag it a few more feet in the air … foliage slapped his cheek. More! With a scream of his own, the dragonet allowed his wings to cup the air, slowing them at the expense of a tearing sensation in his major flight muscles.

Whap! They slammed into a leafy branch, bursting right through it in a spray of greenery. The creature hurtled through a patch of tangled vines, stripping them in an explosion of ripe fruit and a flurry of leaves. The resulting rotation almost flung him free, but Flicker was not done. He dug his claws into the creature's soft flesh, and flared his wings again.

Another, sturdier branch smacked the creature in the side. Thankfully he missed that one, but lower down, there was a huge branch overhanging the red-hot lava flows a mile below. So low already! Right in the danger zone, beyond which even dragonets feared to venture. This was his last chance. Flap, flap and flap again! Wrench this lumpen creature by any means possible into the right trajectory, screaming, muscles burning, magic assisting … thump! They bounced. Rebounded twice more, and then lay swaying on a broken, leafy bed.

Flicker opened and closed his jaw.

I am awesome, he told himself, and fainted.