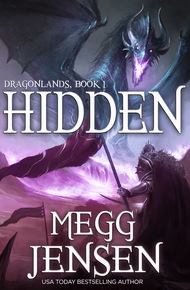 The first novel in a USA Today bestselling series from Megg Jensen!

The mystery enshrouding Hutton's Bridge is as impenetrable as the fog that descended at its borders eighty years ago. Each year, three villagers enter the mist searching for answers. No one ever returns.

Then a dragon falls from the sky to the town square, dead—the first glimpse of an outside world that has become nothing more than a fairy tale to Hutton's Bridge. Except to Tressa.

Tressa grew up with Granna's stories of the days before the fog fell. When Granna dies, leaving Tressa without any family, Tressa ventures into the fog herself, vowing to unravel the foul magic holding Hutton's Bridge captive.

What she discovers beyond the fog endangers the lives of everyone she loves.

Megg is an alumni of another well-received bundle but more than that she's a fantasy star in her own right. A USA Today Bestselling author with multiple series under her belt, Megg writes with her heart and a steady hand. Her books bring together epic magical adventures and romantic passion. Yes! Dragons and kissing, who would have thought?

She helps round out a bundle that is not only about the inner darkness of a human and non-human heart, but also about the relationships between man and creature, brother and sister, as well as partner and lover. The fast-paced romantic storyline of her books will give you the adventure you're yearning for and maybe even a little heart-stopping romance while you're at it. Hidden has it all and Megg puts it in plain sight. – Terah Edun

Sophia woke to the sharp piercing cry of an infant. She pulled the rough blanket over her ears, hiding from the noise. Its screams cut through the otherwise silent air.

"Is someone going to take care of that baby?" Sophia asked from under the covers. She peeked out. Her parents weren't in their bed. It didn't even look like it had been slept in.

Sophia inched the covers down and sat up. "Momma?" She hadn't used that word since she was a little girl. At thirteen, she was nearly a grownup. The only answer came from the crying baby.

She tossed off her covers, slipped into her shoes, and laid a housecoat over her shoulders. She pulled the door open, stepping out into the damp morning chill. A heavy cloud of fog hung in the air, thinner in spots than others, but Sophia couldn't see to the edge of the village to her left. She hadn't ever seen a fog that dense.

The people of Hutton's Bridge were strangely quiet. By this time of morning, adults were always up and about their jobs. Some preparing for a long day of blacksmithing or hawking their wares to the travellers who came from far and wide to buy their honey. Hutton's Bridge had the reputation for the sweetest honey, and it was rumored their honey had healed many an affliction. Even the royal family in The Sands claimed it saved the king during a particularly bad bout of stomach distress.

Yet this morning, no one was about. Sophia's slow gait picked up. Something prodded inside, whispering that none of this was right. She pinched her arm, to reassure herself she wasn't trapped within a dream.

The crying grew louder. It had to be the Connell baby, born just a month ago. Her mother was always so attentive, but today it seemed all of the adults were busy with something else. Maybe they were in the meeting hall?

Sophia knocked on the door to the Connell cottage, sure now that the crying definitely was their baby girl, Kimma. The door swung open silently and Sophia crept into the dark cottage. She glanced to the bed the Connells shared, but just like her cottage, the sheets were unwrinkled. Not slept in.

The baby squirmed in its blanket; the swaddling had come loose. Sophia hurried over to the infant, lying on the floor. Who left their babies on the floor? Her hands cupped under the baby's armpits, the tips of her fingertips holding the bobbling head steady.

"Shh," she cooed in Kimma's tiny ear. "It's okay." Sophia rocked back and forth on her heels, hoping to calm the baby and herself. With each passing moment, fear and panic rose inside her like bile after eating a bad mushroom.

Sophia crept out of the cottage, holding Kimma tightly to her chest. "Where is everyone?"

Kimma cooed in response, her crying over now that she was being held.

Slowly, doors to cottages opened all down the street. A head here, a pair of eyes there. Small hands grasping the wooden frames. Tiny slippered feet shuffling out of doorways.

Not one adult in sight.

Another door opened wide. Sophia smiled in spite of the situation. It was Tomas, the boy she'd recently developed a crush on. "Where are your parents?" he asked Sophia pointedly.

"I don't know. I heard Kimma crying and went to find her. Her parents aren't here either. It looks like none of the beds have been slept in." She stroked Kimma's little tuft of black hair.

"It's the same in my cottage. Where are they?" Tomas turned around, yelling over his shoulder, "Michael, Scott, come out here and run through the village. See if you can figure out where they are." He turned back to Sophia. "Take Kimma back to your cottage and wait, just in case there's something sinister going on here. I don't want you getting hurt."

Sophia nodded, fear streaking through her blood like ice on a cold winter's night. She tried not to bounce too much, she'd heard a baby could die if shaken too hard, as she ran back to her cottage. Closing the door behind her, she finally took a deep breath.

"It's going to be okay," she said to Kimma, even though she knew she was really talking to herself.

Outside her cottage, children cried, calling for their mothers. Some begging for their fathers. Their calls went unanswered.

Finally a knock came on her door. "Sophia?"

The door swung open and closed behind him just as fast. His chest rose and fell, his breathing erratic.

It was then she noticed what was in his trembling hands. Flesh. Blood.

She held the baby tighter and backed away from Tomas. "What is that?"

"Joseph's hand. He ran into the fog and a moment later, this flew back through." Tears streamed down Tomas' cheeks, over his blubbering lips, and onto his nightshirt.

Sophia had never seen him cry. He had always been the bravest boy she knew.

"And the adults?" she asked.

He shook his head. "They're all gone. We're alone."