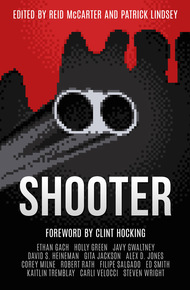 Patrick Lindsey is a game critic currently residing in Boston. In addition to co-writing the interactive fiction game Depression Quest, he also co-hosts both the Indie MEGAcast and Bullet Points podcasts. His work has appeared in outlets such as Five out of Ten, Paste, and Unwinnable. He likes focusing on the intersection of narrative and mechanical design.

Reid McCarter is a writer and editor living and working in Toronto. He has written for sites and magazines including Kill Screen, Pixels or Death, Paste, and The Escapist. He is also editor-in-extremis for videogame site Digital Love Child and is the co-editor of SHOOTER, which you're reading right now. He tweets tweets @reidmccarter.

SHOOTER is an anthology of critical essays about first-person shooters. The 15 chapters explore the genre from a variety of cultural, social, political, and historical perspectives. Featuring chapters from some of the best minds in game criticism, custom hand-drawn illustrations, and a foreword by Clint Hocking, lead designer on Far Cry 2 and Splinter Cell.

"Including a foreword by Far Cry 2 designer Clint Hocking, this eclectic set of fifteen longform articles on first-person shooters and their ilk is a great chance to take a deeper cultural look at some of the best-selling and most-played games out there - from the Call Of Duty franchise to S.T.A.L.K.E.R., Borderlands, Far Cry, and many more." – Simon Carless