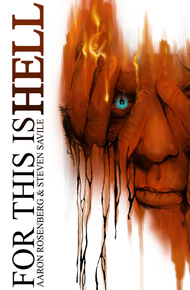 Aaron Rosenberg is an award-winning, #1 bestselling novelist, children's book author, and game designer. His novels include the best-selling DuckBob series (consisting of No Small Bills, Too Small for Tall, and the forthcoming Three Small Coinkydinks), the Dread Remora space-opera series and, with David Niall Wilson, the O.C.L.T. occult thriller series. His tie-in work contains novels for Star Trek, Warhammer, WarCraft, and Eureka. He has written children's books, including the original series Pete and Penny's Pizza Puzzles, the award-winning Bandslam: The Junior Novel, and the #1 best-selling 42: The Jackie Robinson Story. Aaron has also written educational books on a variety of topics and over seventy roleplaying games, such as the original games Asylum, Spookshow, and Chosen, work for White Wolf, Wizards of the Coast, Fantasy Flight, Pinnacle, and many others, and both the Origins Award-winning Gamemastering Secrets and the Gold ENnie-winning Lure of the Lich Lord. He is the co-creator of the ReDeus series, and one of the founders of Crazy 8 Press. Aaron lives in New York with his family. You can follow him online at gryphonrose.com, on Facebook at facebook.com/gryphonrose, and on Twitter @gryphonrose.

For This is Hell by Aaron Rosenberg and Steven Savile

London, 1593. Christopher Marlowe, playwright, spy, and renowned womanizer, is desperately working on what could be his greatest play. But inspiration eludes him, until a chance encounter with a dark temptress rekindles his passion and the words start to flow with that famous passion.

But forces are arrayed against Marlowe. Something doesn't want him finishing, and Marlowe suspects there is a foul, unnatural agency at work. Can the incandescent playwright stop the chaos before it overwhelms the entire city?

This occult thriller from bestselling authors Aaron Rosenberg and Steven Savile combines Elizabethan theatre, ancient mythology, and ageless seduction to create a dark, gripping tale that is both as old as time itself and wholly original.

Steven Savile is a former writing student of mine, and I take full credit in the fact that he's become a #1 bestselling author (of course, his talent and his years of hard work probably had something to do with it, too). I can always count on him when I need something, even a monster. In this case, I had put out the word among my fellow writers in the International Association of Media Tie-In Writers, and his coauthor Aaron Rosenberg approached me to suggest FOR THIS IS HELL as a good candidate for the Monsters StoryBundle. Two heads are better than one…especially when it comes to monsters. – Kevin J. Anderson

"Had your romp, have you?" This was a new voice, low and sultry, spoken close enough to Marlowe's ear that it prickled his skin and tickled deep into his eardrum, sending shivers through him. "Alas, that I was not there to join thee."

He shifted slightly, inclining his head. There was a barmaid beside him, already refilling his jack though he had not yet lowered it back to the table. Although her hands were steady on the flagon and the pitcher, she only had eyes for him. Warmth that had nothing to do with the hot bricks at his back soared through Marlowe as he took in the full glossy length of her dark hair, her fine porcelain features and slender figure, her ample yet frighteningly pert bosom, and the curve of her hips beneath her apron. Alone any one of those might have taken his breath away. Together they stilled his heart. But still they were nothing beside the laughter in her dark eyes and the smile upon her full lips. With those she owned him.

"I shall bear you in mind for all future romps, my good woman."

"There's nothing good about me, good sir," she retorted.

He offered her a playful grin. "Mayhap I should be the judge of that?"

"You, sir, are a rogue and flatterer."

"And don't pretend you do not relish my words. You would be the only woman in London who did not want me for what my silver tongue can do."

"Add to that knave and scoundrel," she accused, smiling even as she did. "Pretty words, prettier face, but tell me, how might you know anything about me beyond my looks? How then could you possibly know whether a duet between us would be to your liking? Not all dancers keep the same time, after all."

"Ah, sweet lady, I am a man of the world," he assured her, attraction loosening his tongue and making him bold, "and a playwright besides—I can judge a soul upon an instant, and tell how two might fit together, for well or ill." He deliberately let his gaze travel the hills and valleys of her body once more, then met her eyes and gave her his cheekiest smile. "Truly, thou and I would fit together like a hand in a glove, so close none could tear us apart, so smooth our every movement would be as one."

"And pray tell, who would be the hand, and who the glove?" came her reply, her free hand resting upon her hip, yet for all the challenge in it she could not have looked more inviting. "Or, who would hold dominance, and who surrender all volition?"

"Why, neither, sweet lady," Marlowe answered, the words coming readily. If only Iarbas' flirtation could be half so sweet, or Barcas' half so convincing! "For surely gloves have adorned such lovely fingers before?" And her hands were lovely, he saw—long and slender, not the roughened digits one might expect from a serving girl. "The glove coats the hand, and thus might be considered master, yet it bends as the fingers bend, so in that it allows the flesh to take the lead. The hand controls the movement, and thus could be said to be dominant, yet all sensation must pass first through the glove, so in that way it trails behind. They are paired, you see, a perfect match, neither ascendant o'er the other."

"Beautifully put, wordsmith—each still strives for mastery," she whispered, her sweet voice going throaty as he leaned in, her breath against his ear once more, her bosom pressed up around his arm. He could feel her weight against him, and the frisson where mere cloth separated them. "But in this contest, there are no losers."

"Indeed," he agreed, finding it hard to ply his voice. His mouth was suddenly dry despite the ale he had just quaffed. "And certes, it is a contest I would happily engage in."

She laughed then, silver jingling within a chest. "Oh, would you, now?" It was her turn to eye him up and down, boldly and without haste. "That is good to know. And who can say, perhaps you will, if you continue to amuse me."

There was no room for him to rise, and certainly not to his full height, though other parts of him might, but Marlowe sketched a passable bow from his seat. "That, madam, sounds like a challenge. I shall make it my quest to amuse you."

"I hope so." Her lips curved in a silent promise. "Very much so indeed." Then, with an exaggerated sashay of hip, she was away to wait upon other thirsty tables.

"Well, well, well. I do believe the playwright has rediscovered his muse," Ned clapped him on the back. "And a fine and buxom one she is. Cleavage like that could drive even me to verse, if I thought she might smother my face in those beauties. Imagine the ecstatic prose that would flow from my mouth!"

"I would really rather not," Marlowe demurred, grinning despite himself.

Other, similarly ribald comments followed as the cups were drunk deeper, and Marlowe joined in, his spirits rising. Ned was right, this was exactly what he had needed. Brooding alone in his rooms was good for nothing. A man should bask in the company of friends and good humor. And, to be frank, in an entirely other form of companionship as well. His eyes followed the barmaid around the room, watching her move from table to table, somehow avoiding those pawing hands. She glanced his way more than once, every bit as interested in Marlowe as he was in her, and laughed to see his so-open admiration.

Already he could feel his creative urges rising.