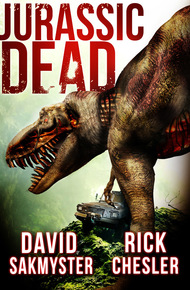 David Sakmyster is the award-winning author of more than a dozen novels, including Jurassic Dead and The Morpheus Initiative, a series featuring psychic archaeologists (described as "Indiana Jones meets the X-Files"). He also has an epic historical adventure, Silver and Gold, the horror novel Crescent Lake and a story collection, Escape Plans. His latest is Final Solstice, and his screenplay, Nightwatchers, has been optioned for production.

Rick Chesler holds a Bachelor of Science in marine biology and has had a life-long interest in the ocean and its mysteries. A certified scuba Divemaster, when not at work writing he can be found diving, boating or traveling to research his next thriller idea. He currently lives in the Florida Keys with his family.

An Antarctic research team hoping to study microbial organisms in an underground lake discovers something far more amazing: perfectly preserved dinosaur corpses. After one thaws and wakes ravenously hungry, it becomes apparent that death, like life, will find a way. Environmental activist Alex Ramirez, son of the expedition's paleontologist, came to Antarctica to defend the organisms from extinction, but soon learns that it is the human race that needs protecting.

David Sakmyster and Rick Chesler go one step further—resurrecting frozen dinosaur corpses which go on the rampage against an Antarctic research team. Dave has always been on the cutting edge of indie publishing, and I gave him a blurb on The Pharos Objective—I think the first indie published book I ever blurbed. We now publish two of his novels at my own WordFire Press. – Kevin J. Anderson

Transfixed, Alex barely heard the muffled explosion over the screams and sounds of rending, biting and ripping. It was like a pack of rabid dogs were attacking one of their own. Alex shuddered and hesitated, then was about to turn to the sub when the mob just… stopped. One of the figures stepped back, holding what looked like a shredded limb, looked at it, sniffed it, and then just dropped it. The others backed away in a semi-circle from the figure on the bloody ice. Tony was barely recognizable, his coat shredded along with his flesh, his ribs protruding from huge bite marks, but a viscous darker mass oozed from lacerations on his face and neck.

All this Alex could only register in an instant, before mind-numbing fear took hold, as the entire horde of Russians turned toward him, tensing, about to rush him when—a wall of ice and snow roared over them. A massive avalanche collapsed the tunnel with hundreds of tons of glacial ice, silt and earth, and a rolling wave of demolition swept over the soldiers, annihilating everything and sweeping them into the lake.

It was just the impetus Alex needed to turn and run. The tunnel was gone, the flares winking out, all but one… Sounds of scraping and growling in the darkness behind him. Splashing feet…

Alex got to the lake edge and hauled open the sub's hatch. A two-seater…perfect. He angled the nose toward what he hoped was the American side, pushed it free of the shore, and jumped in. He locked the hatch back down and powered on the control systems. Refusing to waste time trying to interpret the Russian symbols, he piloted by instinct, knowing it couldn't be too different from flying a Cessna or a Beechcraft, and he had studied the schematics for one of these for weeks back home.

He could do this.

He flicked them on, swelling with satisfaction as the twin halogen beams stabbed out into the gloom. The depth gauge immediately caught his attention. The sub was drifting down, fast, so he found the thrusters, angled the control joystick and veered back up. Compass…? There. Guide it, come on. Accelerate.

Staying on course, keeping the shoreline (or what he hoped was the shoreline) on his left, he maintained a depth of twenty meters and kept moving straight. Fifty meters. One hundred. He shrugged off the coat and threw it in the empty co-pilot seat, breathing a sigh of relief. Then he took a moment to study the environment outside.

The water—and the creatures in it. Floating particles, some of them exhibiting non-random movements. Alex could only imagine what he couldn't see: the microscopic bacterial organisms—those plentiful, ancient life forms he and Tony had set out to preserve and protect.

He swallowed hard. Thinking… thinking again about the lake. About Tony, and the Russians. He had fallen in, and certainly had been cut up. Did bacteria infect him, get in his bloodstream? Had the same thing happened to the Russians earlier?

Did what we had come to protect, instead see us as hosts, and attack?

What had happened to the Russians, and what was happening to Tony?

Alex studied the inner structure of the sub, breathing hard. His lips were dry and he cut his speed, worried suddenly about striking a rock or a wall, breaking the Plexiglas and letting in those…things.

He cut the thrusters just as the sub entered an area that had its own illumination. Brighter lights bobbed in the water, and beams were projected from above.

Welcome to America, he thought, slowing and preparing to descend again, hopefully out of sight before anyone noticed. He would make his way carefully to the far wall and rise to where—according to the American schematics—there should be a dock and an exit ladder.

First… he turned the sub gently—but stopped before he began to accelerate. Something huge was in the way.

Apparently lodged in the muck and rising some…fifty feet at least, according to his gauge, Alex had no idea what it could be.

A rock formation, or a huge glacial deposit?

Alex steered, trying to go around it to the right. Moving in closer, the bright beams focused and reflected off patchy green flecks, like aquatic lichen or bioluminescent sponges. Here and there were deep gouges taken out of the surface of whatever this thing was, segments plucked out in ways that Alex figured were far from natural. He was no geologist, but the manner of erosion—or whatever this was—seemed…violent and…

The sub, carried by an imperceptible drift, jarred to a halt as he suddenly pulled back on the joystick and reversed thrust.

Angling the nose of the craft, he aimed the lights dead-on toward the apex of the formation—where he figured the object was angling and narrowing, providing evidence it had grown like a crystal structure. Except...this formation had something it shouldn't have. Nearly frozen, perfectly preserved down here in the ice until the pressure and weight created a lake of sludge that somehow preserved it…

This… He couldn't believe what his eyes were seeing. Perched above more gashes, torn scales and what he now realized was flesh, rested a single huge eye.

Not daring to breathe, Alex could only gape as the sub reversed slowly, his hand on the controls…until suddenly, the eye blinked.

It seemed to attempt to focus, and then the pupil narrowed and turned almost yellow-white. An enormous set of teeth flashed into the brilliance, as the jaws opened, spreading moss and weed-like debris everywhere.

Losing control in a flurry of ice and bubbles, the craft spun in a one-eighty and slammed into the side of the creature. The viewing dome cracked. Water sprayed inside the submersible, Alex's head slammed against the hatch—and everything went black.