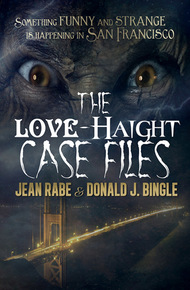 USA Today bestselling author Jean Rabe has penned 31 fantasy and adventure novels and more than 70 short stories. When she's not writing, which isn't often, she edits ... two dozen anthologies and more than a hundred magazine issues. Her genre writing includes military, science-fiction, fantasy, urban fantasy, mystery, horror, and modern-day action. She lives in central Illinois near train tracks that provide "music" to type by, and shares her office with three dogs and a surly parrot. She is a member of the International Association of Media Tie-In Writers, International Thriller Writers, and Novelists Inc. Visit her website: jeanrabe.com.

Donald J. Bingle is an oft-published author in the thriller, science fiction, fantasy, horror, mystery, steampunk, romance, comedy, and memoir genres, with four other books (including Frame Shop, Net Impact, Forced Conversion, and GREENSWORD) and more than 50 shorter stories, primarily in DAW themed anthologies and tie-in anthologies. Many of Don's stories are electronically available, individually or in his Writer on Demand TM collections by genre, including "Tales of Gamers and Gaming," "Tales of Humorous Horror," "Tales Out of Time", "Grim, Fair e-Tales," "Tales of an Altered Past Powered by Romance, Horror, and Steam, "Not-So-Heroic Fantasy," and "Shadow Realities." He is a member of the Science Fiction and Fantasy Writers of America, International Thriller Writers, Horror Writers of America, International Association of Media Tie-In Writers, GenCon Writer's Symposium, Origins Game Fair Library, and St. Charles Writers Group. He was also the world's top-ranked player of classic roleplaying games for about fifteen years. Find out more about him at donaldjbingle.com

The launch of a wild new urban fantasy series!

It is midnight in the Summer of Love.

Thomas Brock and Evelyn Love are attorneys who crusade for the rights of OTs—Other-Than-Humans. Their clients include ghosts, gargoyles, vampires, and things that have not yet been given names. The city's OT element is sometimes malevolent, sometimes misunderstood, and often discriminated against. Brock and Love represent them, whatever the case, whatever the species.

Magic hangs heavy in San Francisco, and danger and intrigue is as thick as the fog around the Golden Gate Bridge. Love-Haight is a comedy, locked within a mystery, hidden in a horror story....

Jean Rabe has been a friend and colleague for many years, and I think she's pestered me into contributing stories for anthologies more than any other person! After reading my Dan Shamble, Zombie P.I. books, she thought her own book about supernatural lawyers working in a monster-filled San Francisco, The Love-Haight Chronicles, written with Don Bingle, might be of interest. I agree! And since it's appropriate, I included my Dan Shamble collection, Working Stiff. – Kevin J. Anderson

"Your client is dead."

"That does not preclude him from seeking joint custody of his two children, Your Honor." Thomas Brock eased back from the table and prayed his nerves did not show. He'd tried cases in the Civic Center Courthouse before, but this was his first time in family court, and he'd never been before the Honorable Vernon Vaughan. The judge's imposing bulldog like appearance unsettled him. "My client—Emanuel Holder—has lucrative employment, lives in a newly-purchased home in the city's prestigious Sea Cliff neighborhood, and has committed no crime. Accordingly, he should be entitled to see his children. In fact, he considered seeking sole custody but decided this arrangement would be better for all concerned."

"Your Honor, seriously?" The opposing counsel—Janet Wyndam-Smyth—pointed a manicured finger at Holder. She looked girded for war, dressed in a black suit with a pencil skirt that accentuated her thinness, bleached blond hair pulled back and slicked against the sides of her face. Her makeup was simple and severe, and her eyes were daggers aimed at the plaintiff.

Thomas glanced at his client. Holder's expression showed a mix of hurt and surprise. It also showed that he was missing his lower lip and had a small hole in his left cheek. Death was not kind to the complexion. Holder was nearly as gray as the three-piece Armani suit he'd worn to the hearing, the maroon tie the only splash of color against a faintly pinstriped shirt. Brock had told him to dress well; he scolded himself for not dictating the colors.

Thomas had to admit that Holder was gaunt to the point of skeletal, the skin seeming painfully stretched over the bones of his face, revealing all the sharp angles and planes and hinting at a visage that once had been handsome. His wisps of fine hair resembled a cobweb, and black eyes that looked like wet marbles stared out from beneath his hooded brow.

"Yes, seriously," Thomas pronounced, holding his shoulders back. "We are completely serious about this, Your Honor, Ms. Wyndam-Smyth."

This was Thomas's first child-custody case, and he liked the relatively informal atmosphere—no jury, no gallery of curious lookiloos, no reporters he needed to carefully posture in front of… just a discussion before a judge who had a reputation for being fair and fast. But Thomas hoped—knew—the media would eventually catch wind of this, and he looked forward to the attention that would do more good than harm for his fledgling practice, which was starting to specialize in OT law.

The "OTs," as they were often called, tended to cluster in cities, and Thomas was well aware there were a good number of them in San Francisco, where some say true magic was born and laid heaviest in the land. OTs, or Other-Than-Humans, included creatures like his client. Holder was a ghoul, an undead creature normally associated with graveyards and considered a corpse-eater. The term OT had come from police reports and fallen into general usage: a police radio operator might say, "See the OT on the corner of Lewis and Harrel." Journalists used it as shorthand in articles and news reports.

According to Holder, he had approached Thomas because the young lawyer recently won a wrongful employment termination case involving a succubus the ghoul knew. She had been fired because the new owner of the sports apparel company she'd worked at for a dozen years did not like OTs. The ghoul had followed the story in the news, and subsequently Thomas took on Holder's case.

Thomas and Holder were joined at their table by Evelyn Love, an athletic looking woman with short red hair and a spray of freckles. Even in a suit, she looked more like a tennis player than a legal assistant.

At the other table was the opposing council—Wyndam-Smyth, a promising young associate from Brock, Davis & Davis, and her client Marilee Cobb, who had taken back her maiden name and who was dressed rather matronly, save for her long, bright red fingernails and overly high heels. A former cheerleader for the Forty Niners who had snared Holder when he was its starting quarterback, Marilee struck Thomas as nothing more than a gold digger.

"Ms. Wyndam-Smyth," the judge began. "I have looked over Mr. Holder's claims and paperwork, and everything is in order. Can you explain for the record why your client objects to sharing custody of the two minor children?"

Thank God, thought Thomas, that Vaughan was seated at his bench several feet away and perhaps out of the range of Holder's stench. The judge seemed both amused and irritated that a failure to mediate this in Family Court Services had placed the custody matter on his docket.

Thomas waited for it, dropped his fingertips to the table, registering the cool smoothness of the maple. He took a deep breath, the fragrant wood polish and his client's liberal use of cologne could not wholly cut the stench of decay that had settled firmly in his nostrils.

Wyndam-Smyth spread papers in front of her. "Your Honor, my client, Marilee Cobb, is a good mother. Gabrielle, seven, and Caleb, eight, are accustomed to living in their home in Presidio Terrace. They are used to the safe, gated community, have friends they play with on a daily basis, and are doing well in their classes at the Kittredge School with its nine-to-one student-to-teacher ratio. Joint custody could disrupt their education, and—"

"Your Honor," Thomas was pleased the judge did not reprimand him for the interruption. "As I mentioned, Mr. Holder lives in Sea Cliff, which is actually closer to Kittredge School than their mother's residence and is also a safe, gated community."

"Filled with monsters," Wyndam-Smyth cut in.

"OTs," Thomas corrected. "The children's education would not be disrupted. Further, my client pays their considerable tuition."

The judge raised his hairy eyebrows. Thomas had done his research. The judge was a family man, had several grandchildren, had spent four years as a defensive lineman with the Green Bay Packers, then two with the Oakland Raiders before a serious knee injury ended his career and led him back to school where he picked up a law degree and eventually landed on the bench. Thomas thought Vaughan might be predisposed to favor Holder due to their similar pasts. But the judge clearly tried to avoid looking at the dead man.

"Let me be blunt, Your Honor, these are children we are talking about, and that—" again she gestured with a manicured nail. "That is a well-dressed corpse, a ghoul, a desiccated, stinking, no… reeking-to-high-heaven… ghoul. Children should not be exposed to that. These children—"

"Excuse me," Thomas cut in. "I'd prefer you address my client as Mr. Holder or the children's father, and that you stop the verbal bullying."

"Yes. Casting disparaging comments is editorializing and unacceptable in my courtroom, Ms. Wyndam-Smyth," the judge said. "And, I'd thought, beneath you."

Score. Thomas barely managed to keep the smile off his face.

A hissing breath escaped from Ms. Wyndam-Smyth's coral-painted lips. Thomas noted that, ever the professional, she kept her voice even. She was good, but she was far from the firm's best, meaning that while the partners had thought this case important enough to assign one of their rising stars, they had either considered it a sure-win that did not require the finesse of a senior attorney, or more likely believed the matter would be outright dismissed. There was little in the California laws that pertained to rights for the undead, and therefore dismissal had been a possibility.

"My apologies, Your Honor." Wyndam-Smyth nodded toward Thomas's table. "Mr. Holder is clearly dead, and we contend that if the children were forced to spend time with him, they could be damaged emotionally and physically. Studies show that people can be traumatized by associating with the dead."

The judge looked to Thomas for rebuttal, again avoiding eye contact with Holder.

"That's simple and ugly prejudice." Thomas was almost too quick to provide a counter, but he railed against discrimination, especially against OTs. He'd been championing OT causes ever since college when he had a vampire roommate. "Other studies—though admittedly few have been done on the matter—show that association with undead such as Mr. Holder is no more psychologically damaging than association with certain types of living individuals. In fact, one study suggests a positive response because—"

"I also said 'physically.' We contend that the children would face serious bodily harm—if not death—were they to spend time with their father."

Thomas realized he had scored another point. Wyndam-Smyth had just referred to the ghoul as the children's father. Evelyn realized it too; she gently nudged his foot with her own and quickly wrote on a legal pad.

Wyndam-Smyth stood and smoothed at her skirt. "Ghouls eat flesh, your honor; that is a fact. The children would most certainly be in jeopardy. That is why my client has rebuffed her former husband's every attempt to contact them. Marilee Cobb does not want her children devoured." Wyndam-Smyth held up a photograph of a young boy and girl dressed in school uniforms. "Handing Gabrielle and Caleb over to their father could be tantamount to handing them a death sentence."