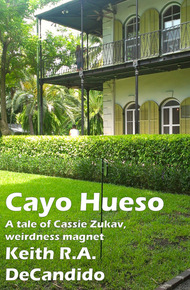 Keith R.A. DeCandido is the author of more than 50 novels, about a hundred short stories, a mess of comic books, and more nonfiction than he's willing to count. While a good chunk of his output is in the 30+ licensed universes he's worked in from Alien to Zorro, others are in worlds of his own creation, such as the Precinct series of fantasy police procedurals (Mermaid Precinct being the latest), urban fantasy series set in Key West and New York (most recently the novel A Furnace Sealed), and, of course, stories about the Super City cops. In addition to The Case of the Claw, check out the eBook novellas Avenging Amethyst, Undercover Blues, and Secret Identities, and be on the lookout for four more Super City cops novellas from Falstaff Books. Find out less about Keith at his inadequate web site at DeCandido.net.

Cassie Zukav always knew she was a bit of a weirdness magnet. Ever since she came to Key West for a short vacation and never left, she's dealt with strange creatures, odd happenings, and the remnants of the Norse pantheon when she stopped Loki from destroying the world. It was then that she found out that she's one of the Dísir—a Norse fate goddess. At least now it all makes sense...

Well, kind of. She still has to deal with weird stuff like all the ghosts on Key West becoming more active. Ernest Hemingway is throwing people out of the Hemingway House, Harry S Truman is starting poker games in the Little White House, and another ghost is killing people right and left. Cassie has to find out which ghost is committing murder and who's supercharging the ghosts.

If that wasn't enough, after sixteen months of wondering when she was going to come home, Cassie's parents have shown up on Key West unexpectedly, and they're looking for answers...

Keith RA deCandido and I came up together in the early 1990s when writers began to make their living working on media tie-ins. When the Matthew Broderick remake of GODZILLA came out, Keith landed the gig of writing the novelization for a cheap made-for-TV knockoff called GARGANTUA. Trust me, his selection for the Monsters StoryBundle is MUCH better. – Kevin J. Anderson

Within a few minutes, I was approaching the corner of Caroline Street and Duval. I could hear Sandy's voice desperately trying to keep up with his acoustic guitar on the rendition of "Pinball Wizard" he'd threatened me with sixteen months ago. It might not've sucked if someone else sang it. Nodding to Lio, the bouncer, I came in.

Only after it was obvious that I was entering did Lio try to stop me. "You sure, Cass? The good act starts at eleven."

I chuckled. "I actually do need to talk to Sandy about something."

He snorted. "Your funeral. God willing, his ass'll be takin' a break soon."

I went in to sit at the bar. Sandy noticed me, and stumbled over a couple of notes on "Pinball Wizard." I ordered a pint of beer as he finished that song, then went into "City of New Orleans," which wasn't offensive, and "Me and Bobby McGee," which kinda was. Never mind living up to Janis Joplin, he couldn't even live up to Kris Kristofferson. After a painfully bad rendition of "Blackbird"—again, his voice couldn't keep up with his guitar work—he announced, "We'll take a short break. Please don't let that jar be lonely."

Glancing over at the stage, I noticed that the tip jar had a few bills in it, but not much. I wasn't sure how the Bull paid, but if he had to live off of tips, well, it was no wonder he also worked at the Hemingway House.

Naturally, he made a beeline for me, sitting down in the next stool over unasked, just like the first time. However, since that was actually what I wanted, I said nothing.

"Hey, Cass! It's really great to see you! And hey, thanks for bringin' your parents by, that was totally awesome."

"I actually wanted to talk to you about that. When did the ghost—"

"Hey," he said quickly, running right over my question, "I know you get the newsletter, but you may not have seen? I'm gonna be playing at—"

"I'm here to talk to you about why the ghost of Ernest Hemingway is committing assault on customers at the museum. I am not here to talk about what laughingly passes for your musical career, and if you insist on talking about that instead of why the most overrated writer in the language attacked my father, I'm going to leave."

"When did the ghost show up?"

"L-l-last week. He just started barreling through and yelling at people and asking what all the cats were doing there, and—" He shuddered. "They're gone, Cassie. All the polydactyl cats are gone. He threw 'em out, and as soon as someone walks in and asks about the cats the way your Dad did? He throws them out, too! It's crazy!" He shook his head. "And it's killing the business. Seriously, the owners're getting pissed. We're bleeding attendance, and it's only gonna get worse. Especially since nobody wants to talk about it." He put a hand on mine. I gave him a death glare and he quickly pulled it back. "I'm so glad you believe it really happened. Most people think it's some kind of trick, but because he's so violent, nobody likes it, and they leave and don't come back and tell their friends how awful it is…"

"The worst. The place'll have to close if this keeps up. As it is, we keep closing early, and they're talking about not opening again until Friday, hope we get a decent weekend crowd." He sighed. "Are your parents enjoying it here?"

The very last thing in the universe I wanted to do was discuss my personal life with Sandy. Luckily, I had an easy out, as I was down to my last gulp of beer. "They love it. Thanks for the help, Sandy." I threw back the last of the beer, let out a very unfeminine belch, and then hopped off the stool.

"That was awesome!" he said after the burp, which was kinda gross. "Hey, why not stick around for the second set?"

"Maybe another time," I said lamely. He'd actually provided some useful info, so I didn't want to totally let him down by saying what I was thinking, which was, Never in a billion fucking years.

Nodding a goodnight to Lio, I headed back to the B&B, only to find the ghosts of two old white guys in my room.

"Well, look who's here." I shook my head as I slid the door shut behind me. All I needed was a little green Muppet, and I had the final scene from Return of the Jedi in my room.

"Captain Bottroff tells me that I owe you an apology."

"Actually, you owe my father an apology. What I want is an explanation."

"Why you're being such an asshole."

Hemingway turned to Bottroff. "You told me she was a lady."

To my shock, the captain actually smiled. "I told you she was a young lady."

Folding his arms, Hemingway said, "What is it that requires explanation? I believe I have the right to dictate who is allowed in my own home!"

"In fact, Mr. Hemingway," the captain said, "it is no longer your home. Believe me, I have had quite the lesson in that. Miss Dellamonica owns this residence now, and she—"

"Hogwash!" Hemingway bellowed. "This is as much your home as it was then—it even has your name on it, as does my home on Whitehead. It perpetuates my reputation, and a man has a right to protect that."

"All right, so how's causing bodily harm to patrons protecting your rep? Or are you trying to cultivate a reputation as a spectacular jackass?"

"Hardly, but nor am I cultivating a reputation as a cat lover."

"Of course I do, and I had quite a number of them in Cuba. But the house is overrun with them! And when given the opportunity to do something about it, I took it!" Hemingway clenched his fists in a display of machismo that was depressingly predictable.

"So now the world can appreciate you for your genius and not for your predilection for cats?"

"It was only the one damned cat anyhow! My home was never festooned with the blessed things! And I refuse to allow it to become a haven for cat-lovers."

I couldn't help but chuckle. "You do realize that the people who run the place are cat-lovers? They've already started closing early, and they'll be closed tomorrow and Thursday. It's supposed to be open seven days a week. At this rate, you're going to put the people who've kept your legacy going out of work. Even if they do manage to reopen, most of the people who show up will be coming to see what happened to the cats. Not to mention the fact that the island's gonna be full of homeless six-toed cats now."

"I mean, you just kicked the poor cats out. What happens to them now? It's supposed to rain tomorrow, and you've just dumped dozens of felines out onto the street with no home."

Hemingway just stared at me for several seconds, then turned to look at my roommate. "Captain Bottroff, I must ask you. Is this woman—this young lady—always so damned infuriating?"

I snorted. "Fuck you too, Captain."

"You see?" Bottroff indicated me with an outstretched hand.

That got Hemingway to chuckle. "I'm impressed. I can see why Captain Bottroff seeks out your company. In less than a day, you have given more thought to the consequences of my actions than I have for the last several decades."

My eyes went wide. "You've been planning this that long?"

"Yes, but my comparative corporeality is a recent development."

"You have any idea why?"

I sighed. He didn't have any more insight into the supercharging of ghosts than Bottroff did. But he was damn sure taking more advantage of it.

"I do see your point, Miss Zukav I'll allow the cats to return and refrain from causing harm to the patrons—up to a point."

"I'll take what I can get. There's too much of you on this island already without you messing things up."

Hemingway folded his muscular arms. "Is that an insult?"

I pretended to think about it. "Pretty much, yeah. I always thought your work sucked, by the way."

"Captain Bottroff," the ghost of Ernest Hemingway said, "you never told me your friend was a critic." And then he laughed, even as a breeze kicked up. A moment later, he was gone.

If I was lucky, he wouldn't come back.