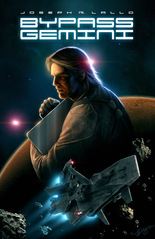 In a distant future, Trevor "Lex" Alexander was shaping up to be the next great race pilot until a fixed race got him banned from the sport. Reduced to making freelance deliveries, he thinks his life can't get any worse. That's when a package manages to get him mixed up with mobsters, a megacorp, and a mad scientist. Now his life depends on learning what their plans are, and how he can stop them.

An excerpt from Chapter 7 of Bypass Gemini

Lex grabbed his things and limped down the steps of the bus. Once he was out, the door snapped shut and the bizarre vehicle whisked off toward one of the other buildings. The injured pilot eyed “Lab” warily. He wasn’t terribly confident in the wisdom of entering a strange building on a strange planet after a surreal trip, but the alternative was sitting outside until the cold became lethal. He shrugged and stepped up to the door.

“Greetings, unknown person. You are new to this facility, please answer a few short questions before entry,” said a female voice, or rather, several of them.

The speaker next to the door was clearly part of an automated system, but it had the characteristic screwed-up inflection and awkward pauses of a message assembled by slicing the words out of other messages. It sounded like the words had been sampled from announcements from at least three different people, all women.

“It sounded like you said... AlexanderTrevorAlexander,” it droned, pronouncing the full name as one word and without pauses. The name was spoken in a fourth, clearly synthetic attempt at a female voice, “Is that right?”

“No. Trevor Alexander,” he groaned through clenched teeth.

“It sounded like you said... Trevor Alexander... Is that-”

“Listen, can I talk to a real person? Or at least a better computer?”

“Processing. I’m sorry, but the real person is busy doing very important things. And insulting the computer is not going to win you any friends,” the voices said, somehow managing to sound petulant despite the comment being assembled from unrelated ones.

The doors of the lab slid open and a green stripe illuminated along the wall of the hallway within.

“Please follow the green lights to workshop F. And you are officially on my S-list, Mr. Alexander.”

Lex stood at the door, opening and closing his mouth as he tried to put his confusion to words. Finally, he shrugged.

“Why would things start making sense now?” he muttered.

After a single step past the threshold, it felt as though someone had dropped a load of sandbags on top of him. He staggered and leaned heavily on the wall to keep his injured leg from collapsing. A second later the doors hissed shut behind him and nozzles doused him liberally with a fluid that stung viciously, but evaporated almost instantly. The shock and awe of the assault left him dazed for a moment.

“Please brace yourself for artificial gravity and decontamination. Thank you,” the computer said.

After he straightened up and shook away the notion that the computer had done that on purpose, he looked over the entryway. The inside of the building was as institutional as the outside, and extremely old. The lighting was provided by overhead hanging banks of bulbs, and it was the sickly yellow of fluorescent instead of the cool blue of LED. The floor was some sort of rugged plastic material, scuffed and marred with use and faded with age. Walls, ceiling, and floor were all one shade or another of neutral blue. Identical metal doors and large, reinforced glass view windows lined the walls on either side. The rooms were all filled with various tools and disassembled machinery on work tables, but there was no sign of people in any of them. In fact, there was no sign of people, period. No one walked the halls. There was no sound of conversation. Nothing but his own footsteps, the echoing growl of power tools somewhere further down the hall, and a pulsing green strip that traced along the tops of the doorways. It led to a workshop near a bank of industrial elevators. Inside was the source of the noise.

Splayed out on the work table inside was a carefully arranged layout of parts and tools. A hydraulic jack held what was certainly a piece of an engine, but Lex couldn’t quite identify it. Whatever it was, there were lots of pipes, lots of tubes, and it appeared to be running, as the whole jack was humming and vibrating along with it. Working on the mystery component was a man in blue coveralls. He was focused intently on his task, his back to the door, and if he had noticed Lex’s arrival, he hadn’t acknowledged it. When Lex approached the door, it hissed open. He still didn’t turn, reaching awkwardly across the table instead.

Lex sidled painfully into the room and found the appropriate tool, handing it over.

The mechanic silently accepted it and went back to work.

“I recognize your voice. You were the one who was yelling at me when I was in the junk cloud. And you sent the bus. My name’s-”

“In a minute. Gotta bleed this valve. Very important.”

“What is that, a plasma manifold? You can’t bleed a valve on one when it’s running.”

“Sure you can, you just need to time it right. See, watch.”

Lex took a cautious step back as his mystery host started loosening fittings. The hunk of machinery started to stutter and vibrate, prompting the downed pilot to strap his helmet back on.

“See, you just twist here, three quarters of a turn. Wait for that to actuate, then loosen and-”

There was a short, sharp hiss. The room filled with a powerful scent of heat, ozone, and char, and the wall and ceiling received a spritzing of blood. Something pinged off of Lex’s helmet and bounced across the room.

“Son of a- !” the mechanic barked in pain, clutching his left hand to his chest as he gingerly re-tightened a fitting with his right. “Forgot I changed the sequence.”

“Nope, nope. No, I lost some fingers,” he said quickly, holding up the afflicted hand.

It looked like he had tried to palm a grenade. There was blood seeping down his arm, and if there were any fingers left at all, Lex couldn’t tell them from the rest of the mangled mess that remained of his hand.

“I just told you. Give me a hand. They’re in that box over there.”

“Never mind. Frickin’ useless. Just look around for the fingers then. I used to have five. See if you can find two or three. I saw one go that way,” he added, gesturing with the ruined nub, “And another over there.”

Lex threw down his packages and tore off his helmet. Amid protests from his ailing leg, he dropped to his hands and knees and started searching for the missing digits. He found a thumb under the edge of a cabinet, and two more fingers near the door. He took a few more frantic glances, found nothing, and decided speed was better than thoroughness. The mangled mechanic was on the opposite side of the room now, flipping open the top of a large plastic crate. Lex hurried over.

“I couldn’t find the rest! What do I do with these, put them in ice or something?!”

There wasn’t any pain in the man’s voice or features anymore. In fact, he almost seemed bored, rolling up the tattered sleeve to grasp his forearm and, with a few clicks and twists... remove the whole arm at the shoulder. He pulled a bin on the floor out with his foot and dropped the ruined arm inside. There were at least two other similarly chewed up appendages already in there. Then, from the freshly opened crate, he pulled a new arm.

Lex took the limb without thinking. Anger, disgust, confusion, and panic were all actively campaigning for time on his face. Confusion won. He stuttered and sputtered, trying to find the right words to adequately object to the situation, but his mind was not yet ready to be coherent. Meanwhile the mechanic rummaged through a drawer with his remaining arm until he found a pair of shears. He then cut the bloody sleeve off, revealing a complicated looking metal socket where his shoulder should be. Wordlessly, he took the arm from Lex, lined it up with the socket, and connected it.

“There, that’s that done,” he said, life quickly returning to the limb, and the appropriate color beginning to fade into its pale flesh. He brushed himself off, swept the fingers from the table into his pocket, and proclaimed, “Who’s hungry?”