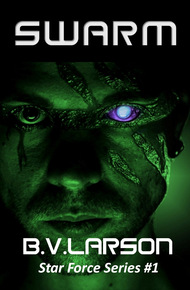 B. V. Larson is the author of more than fifty books with over two million copies sold. His fiction regularly tops the bestseller charts. He writes in several genres, but most of his work is Science Fiction. Many of his titles have been professionally produced as audiobooks and print as well as ebook form. Eight of them have been translated into other languages and distributed by major publishers in foreign countries. He writes college textbooks in addition to fiction, and his three-book series on computer science is currently in its sixth edition.

Swarm by B. V. Larson

Kyle Riggs is snatched by an alien spacecraft sometime after midnight. The ship is testing everyone it catches and murdering the weak. The good news is that Kyle keeps passing tests and staying alive. The bad news is the aliens who sent this ship are the nicest ones out there....

SWARM is the story of Earth's annexation by an alien empire. Long considered a primitive people on a backwater planet, humanity finds itself in the middle of a war and faced with extinction. SWARM is an 88,000 word novel of science fiction by bestselling author B. V. Larson.

“Okay,” I said, hunkering down. “Here’s what we are going to do when it comes back.”

I had their attention. “I’ll fire first. Everyone must concentrate on a single turret at a time. When that one is gone, we all fire at the next one. Now spread out. Don’t let it take us all out at once.”

Men scooted away in every direction, taking up firing positions in the ruins of the bunker. We didn’t have long to wait. The Macro finished with the beach group, then headed in our general direction again. But it didn’t go right over us. Instead, it waded into the river, pausing to fire at something on the far bank.

“Dammit,” I growled. We couldn’t leave the ruined bunker, we’d be exposed and cut down at range. I judged the distance. It was less than a thousand yards off. It probably couldn’t get its main top gun down far enough to level it on the bunker at that range. We’d studied these machines, and they were designed with one big gun on top to use on aircraft and larger targets. The belly turrets were for the small stuff like us.

I crawled across the steaming bunker and poked my nose and rifle out on the far side. “Take cover, everybody!”

“What are you doing, sir?” asked someone. I think it was the sergeant.

I shot the thing in the ass. Just a quick burst. It was pointless, of course, I couldn’t damage it through the shields. But the effect was electric. I saw a number of turrets swivel in my direction. The machine didn’t turn around, it simply started walking in our direction. It didn’t really have a face, or a head—a front or back. It was designed to be able to move in any direction at will, like a giant crab with legs all around.

We all ducked. Fire came in, tearing up the ground. Gouts of energy flared and my goggles dimmed themselves to prevent instant blindness. I didn’t bother to give it another encouraging shot. There was no need.

As I had hoped, it came close. This bunker had been marked dead, but now had shown signs of life. In its artificial mind, it would have to be sure this time. It would have to get in close and finish us.

In the end, it almost did. We learned, when the brilliant tropical sky turned dark again due to the vast bulk looming over us, that it had only seven operating turrets left. I had only eleven men. They were good men, and they followed my lead. No one fired until I did. It took about two seconds to light up each turret and destroy it. Unfortunately, the turrets were lighting up my men one at a time in return. When the last turret popped, I had only three men left.

I watched in horror as the last of the turrets fell off the bottom of the great machine. It crashed down, crushing another of my men.