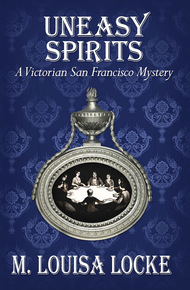 M. Louisa Locke, a retired professor of U.S. and Women's History, has embarked on a second career as the author of novels and short stories set in Victorian San Francisco that are based on Dr. Locke's doctoral research on late 19th century working women. In Maids of Misfortune, Annie Fuller, a young widow, goes undercover as a domestic servant to solve a murder, in Uneasy Spirits, Annie and lawyer Nate Dawson investigate fraudulent trance mediums, and in Bloody Lessons, they try to determine who is attacking San Francisco teachers. Deadly Proof, the fourth book in the series, is about women in the San Francisco printing industry.

Not just content with writing about the past, Locke has recently turned to the future with the coming of age science fiction adventure story, Between Mountain and Sea, set in the collaborative world of the Paradisi Chronicles. Locke is active in the Alliance of Independent Authors and the Historical Fiction Authors Cooperative. More about her work can be found at www.mlouisalocke.com

In this sequel to Maids of Misfortune, it is the fall of 1879 and Annie Fuller, a young San Francisco widow, has a problem. Despite her growing financial success as the clairvoyant Madam Sibyl, Annie doesn't believe in the astrology and palmistry her clients think are the basis for her advice.

Kathleen Hennessey, Annie Fuller's young Irish maid, has a plan. When her mistress is asked to expose a fraudulent trance medium, Arabella Frampton, Kathleen is determined to assist in the investigation, just like the Pinkerton detectives she has read about in the dime novels.

Nate Dawson, up-and-coming San Francisco lawyer, has a dilemma. He wants to marry the unconventional Annie Fuller, but he doesn't feel he can reveal his true feelings until he has a way to make enough money to support her.

In this cozy historical mystery of romantic suspense, Annie delves into the intriguing world of 19th century spiritualism, encountering true believers and naïve dupes, clever frauds and unexplained supernatural phenomena. She will soon find there are as many secrets as there are spirits swirling around the Frampton séance table. Some of those secrets will threaten the foundation of her career as Madam Sibyl and the future of her relationship with Nate Dawson, and, in time, they will threaten her very life itself.

M. Lousia Locke was one of the first self-published authors I ever read, and among the first to show me how terrific they can be. Her novels are beautifully researched, and Annie Fuller is one of my favourite lady detectives. It's a pleasure to be able to include not one but two of these titles in this bundle. – Charlotte E. English

Why hasn't that good-for-nothing boy come up to get me ready for bed yet? The hall clock just chimed quarter past nine! Eighty-four years old and I can still hear everything that goes on in this house. There! Sounds like he just knocked something over, down in the parlor. Probably he's smashed up all my pretty treasures by now. Counting on me never making it downstairs again. Hah! Well, son, you have a surprise coming to you. Next fine day, I'll holler down to the garden for Manny and get him to come up here and use those muscles of his to carry me all round the house. See what mischief you've been up to. I'll make you pay for everything you've damaged.

Won't I make you pay! You and that young wife of yours, too. Haven't seen hide nor hair of her since noon. A blessing, really. Watching her gallivanting around the place like she owns it. Makes me sick. She can't keep house worth a damn. Lets the tradesmen and that thieving cook take advantage of her. That's why the housekeeping money don't last! Between the two of you, robbing me blind.

I never should have let you move back in when your pa got so sick. That was a mistake. But he wanted his son nearby, didn't he? Wanted to keep an eye on how you were running the company is more like it. If just one of the other boys had lived, oh things'd be different. Six sons, and the sorriest one of them all is the only one that outlasted their pa. If Zeke just hadn't gotten killed in that brawl. Now that was a man who loved his mother. He wouldn't have left me up here all alone. It's time for my heart pills and I want to go to bed!

Wedged in a massive wing-backed chair facing the fireplace, the old woman fretfully moved her head from side to side. The few glowing embers in the grate left the room in near darkness, except where the glow from the gas fixture in the hallway showcased the porcelain figurines of shepherds and shepherdesses preening across the top of a mahogany dresser. Ropes of pearls cascaded down the front of the stiff satin dress that stretched over the woman's colossal frame. Wispy white hair capped a face of concentric soft circles, from her multiple chins to the drooping round hole of her mouth. But the pale cold eyes that glittered in the faint light ruined any illusion of amiability.

She suddenly raised an elegant wooden cane and began to pound furiously on the floor, setting every piece of jewelry and china to prancing. Just as abruptly, she stopped and cocked her head, the silence filled by her ragged breathing.

There, I hear you coming up the stairs. Forgot me, didn't you, sonny boy? Left me to freeze up here. How many times have I told you, my poor feet can't take the cold evening air? But now you've let my fire go out, and it will take forever for me to warm up. It's Nurse's night off and good riddance to her, sneaky thieving woman, but that means you or that good-for-nothing wife of yours will just have to rub my feet for me tonight, won'cha!

What are you waiting for? Think I can't hear you standing out in the hallway? You know it's past time for my pills; I can hardly breathe. Dr. Hodges told you how important it is to give them to me on time. Too scared to come in by yourself, are you? Want me to say 'pretty please?' I wouldn't give you the satisfaction.

That's better, come right on in and quit trying to sneak up on me. I know that trick, always trying to frighten me to death. There you go, ran right into the end of the bed, you clumsy oaf. Now, why are you just standing there breathing down my neck? Irritating boy. You just come around in front where I can see you and I'll rap you one with my ... What are you doing? Stop it! No, no, get that away, I can't brea ...

The pillow was carefully placed on the floor, the clock in the hallway struck nine-thirty, the last ember snuffed out, and the Dresden figurines stared silently as hundreds of tiny pearls clattered softly to the carpet.

Across town, a young girl sat in the attic in a large armchair, her face in deep shadow. A shaft of moonlight from one of the two eastern facing windows cut diagonally across her chest, revealing multiple loops of colored beads that fell down to her waist. Her feet dangled, not touching the floor. In her arms lay a china doll, whose painted frozen features exhibited more life than could be found in her own face.

A song issued tunelessly from those rigid lips.

The girl straightened and pointed, her index finger contorted in a grotesque fashion. "You stop it right now." Her voice, despite a quaver, was sharp and strong, and its force twisted her face into a mask of fury. "I see what you did. I see everything. You can never hide from me ... stop ..." The girl clutched at her chest, and the beads broke, cascading to the floor. The girl slumped, again immobile, humming.