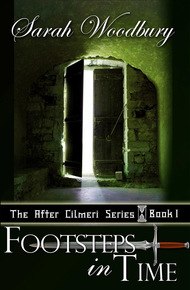 With two historian parents, Sarah couldn't help but develop an interest in the past. She went on to get more than enough education herself (in anthropology) and began writing fiction when the stories in her head overflowed and demanded she let them out. While her ancestry is Welsh, she only visited Wales for the first time while in college. She has been in love with the country, language, and people ever since. She even convinced her husband to give all four of their children Welsh names.

Footsteps in Time by Sarah Woodbury

In December of 1282, English soldiers ambushed and murdered Llywelyn ap Gruffydd, the Prince of Wales. His death marked the end of Wales as an independent nation and the beginning of over seven hundred years under the English boot.

Footsteps in Time is the story of what might have happened had Llywelyn lived.

And what happens to the two teenagers who save him.

Footsteps in Time is the first book in the After Cilmeri Series.

I love time-travel tales. There's something so enthralling — and intriguing — about the prospect of stepping back in time and experiencing a lost era. Books like Sarah Woodbury's offer not only an exciting way back but an absorbing view of alternate history, and her vision of medieval Wales is captivating. – Charlotte E. English

"Do you want me to come with you?"

Anna looked back at her brother. He'd followed her to the door, his coat in his hand.

"Okay." She tried not to sound relieved. "You can hold the map."

The clouds were so low they blended into the trees around the house and Anna tipped her head to the sky, feeling a few gentle snowflakes hit her face. They walked across the driveway, the first to leave tracks in the new snow.

"You're sure you can handle this?" David said, eyeing the van. It faced the house so Anna would have to back it out.

"Christopher's waiting," Anna said. "It's not like I have a choice."

Their aunt had asked Anna to pick up her cousin at a friend's house since she had a late meeting and wouldn't make it. Ignoring David's skeptical expression, Anna tugged open the door, threw her purse on the floor between the seats, and got in the driver's side. David plopped himself beside her with a mischievous grin.

"And don't you dare say anything!" She wagged her finger in his face before he could open his mouth. He was three years younger than she, having just turned fourteen in November, unbearably pompous at times, and good at everything. Except for his handwriting, which was atrocious. Sometimes a girl had to hold onto the small things.

"Which way?" Anna said once they reached the main road. The windshield wipers flicked away the new snow, barely keeping up. Anna peered through the white for oncoming cars and waited for David to say something.

David studied the map, disconcertingly turning it this way and that, and then finally settled back in his seat with it upside down. "Uh ... right."

Anna took a right, and then a left, and within three minutes they were thoroughly lost. "This is so unlike you."

Anna glanced at it, but one of the reasons she'd accepted his offer to come with her was because maps confused her under the best of circumstances.

"The roads wander at random and they all look the same," he said. "Half of them don't even have signs."

Anna had to agree. Identical leafless trees and rugged terrain faced them at every turn. She drove up one hill and down another, winding back and forth around rocky outcroppings and spectacular, yet similar, mansions. As the minutes ticked by, Anna clenched the wheel more tightly. She and David sat unspeaking in their heated, all-wheel drive cocoon, while the snow fell harder and the sky outside the windows darkened with the waning of the day. Then, just as they crested a small rise and were taking a downhill curve to the left, David hissed and reached for the handhold above his door.

"What?" Anna took a quick look at David. His mouth was open but no sound came out, and he pointed straight ahead.

Anna returned her gaze to the windscreen. Ten feet in front of them, a wall of snow blocked the road, like a massive, opaque picture window. She had no time to respond, think, or press the brake before they hit it.

They powered through the wall and, for a long three seconds, a vast black space surrounded them. Then they burst through to the other side to find themselves bouncing down a snow-covered hill, much like the one they'd been driving on but with grass beneath their wheels instead of asphalt. During the first few seconds as Anna fought to bring the van under control, they rumbled into a clearing situated halfway down the hill. She gaped through the windshield at the three men on horseback, who'd appeared out of nowhere. They stared back at her, frozen as if in a photograph, oblivious now to a fourth man, who'd fallen to the ground.