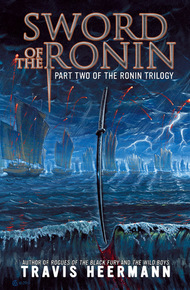 Freelance writer, novelist, award-winning screenwriter, editor, poker player, poet, biker, Travis Heermann is a graduate of the Odyssey Writing Workshop, an Active member of SFWA and the HWA, and the author of the Tokyo Blood Magic, The Hammer Falls, The Ronin Trilogy, and other novels. His more than thirty short stories appear in Baen Books' anthology Straight Outta Deadwood, plus Apex Magazine, Tales to Terrify, Fiction River, Cemetery Dance's Shivers VII, and others. As a freelance writer, he has contributed a metric ton of work to such game properties as Firefly Roleplaying Game, Legend of Five Rings, EVE Online, and BattleTech, for which he's been nominated for a Scribe Award.

He enjoys cycling, collecting martial arts styles and belts, torturing young minds with otherworldly ideas, and monsters of every flavor, especially those with a soft, creamy center.

Sword of the Ronin by Travis Heermann

In 13th-Century Japan, a land of ancient spirits, shapeshifting animals, and demons, Ken'ishi is a warrior without a master. Orphaned in infancy, he has only one link to his past—Silver Crane, his father's sword. When Silver Crane is stolen, Ken'ishi must go on a quest to recover his very identity.

The crime lord known as Green Tiger knows of Silver Crane and dreams of the day when he can destroy the shogunate and restore his shattered clan, with intrigues stretching to China, where the Mongol emperor Khubilai Khan builds an invasion fleet.

With his only weapon a wooden sword, Ken'ishi enters the shadowy world of flesh houses, Chinese smugglers, and Mongol spies.

To succeed and unleash Silver Crane's power, he must face the darkness in his own soul.

Travis Heermann's books are intricate and beautifully researched. They offer an absorbing glimpse into medieval Japanese life, and his Ronin's story is absorbing and inspiring. I particularly enjoy the delicacy with which he has blended the historical with folklore and fantasy; the result is a rich and exciting story. – Charlotte E. English

To be truly happy, a man must forget the past and the future.
— Zen proverb

Ken'ishi's wooden sword clacked against the crown of his practice post over and over. The wooden post, hardened by endless multitudes of blows over the past three years, felt like a stone pillar. Hot summer wetness thickened the afternoon air, and sweat slicked his callused palms and naked legs, made his loincloth sag low on his hips.

Then a loud crack from the end of his bokken made him pause as the tip splintered.

With a sigh, he tossed it aside. With only one remaining, he would have to ask the village woodcrafter to fashion another set. In a time of peace, with his teacher so far away, this was his only way to maintain his skills.

The music of the nearby forest whirred and sang and droned, here on the outskirts of Aoka village, where he went for quiet practice. The conversations of the birds fluttered past his ears, echoing up into the forested mountainsides that flanked the expanse of Hakata Bay. Many of their nests were empty at this time of year, with the parents teaching their hatchlings to fly. They had little use for the activities of humans in any case, except to scrounge thread or steal thatch or scavenge bits of detritus for nest-making, or to pilfer food.

Ken'ishi ignored them, too absorbed with practice today to speak to such small-minded creatures.

He suspected Little Frog was nearby; the boy always seemed to be when he was practicing. Perhaps someday he would teach the boy to speak to animals, as Ken'ishi's old teacher had taught him.

Ken'ishi raised his voice, "I'm certainly glad no one is about. I could not possibly practice with anyone watching."

A rustling bush nearby, then a hoarse, stifled giggle. He caught a glimpse of a tiny topknot peeking above the foliage.

Ken'ishi smiled and reached for his last bokken, propped next to his sword, the tachi named Silver Crane. The two cranes engraved into the circular guard glimmered in the sun, ever in pursuit of each other. Even the old, battered scabbard seemed freshly polished today.

Hearing his name called, Ken'ishi glanced up to see Norikage running toward him, robes flapping like sacks on a scarecrow, his face red with alarm.

The small man puffed, his narrow cheeks flushed as he halted before Ken'ishi. "Trouble … On the docks … A brawl."

Ken'ishi snatched up Silver Crane and ran toward the village docks.

Norikage tried to keep up. "You know … I cannot fight … I could not … stop them."

As they neared the village center, shouts rose from the direction of the docks. Faces peeked out of the doorways. Children ran toward the noise. In the three years Ken'ishi had lived in Aoka village, he had never heard such a ruckus—part shock, part cheering, part pleading. The villagers were generally peaceful, except occasionally on festival days when an excess of saké or the eye of a maiden brought a pair of young men to fisticuffs. This sounded serious.

He rounded the corner of the inn, trotting down the slope toward the docks. A gathering crowd obscured the fight. Reaching the ragged edge of the throng, he used Silver Crane's scabbard to thrust between bodies and pushed himself through. "Out of the way! Make a path!"

The throng ringed not two, but a handful of combatants grappling in the dirt, one wrapped in a headlock, others with punches flying. When Ken'ishi saw who they were, his heart sizzled. Three distasteful brothers—fishermen—versus three honest, upright brothers—woodcutters. A club and a knife lay in the dirt. Blood covered the face of one sprawled combatant from a gash above his ear; he struggled to right himself and rejoin the fray.

Ken'ishi gathered a great breastful of air and blasted it like a war cry. "STOP!"

The crowd drew back at the force of his voice. Two of the combatants relented their grips. Two others continued pummeling a helpless, nearly unconscious third, and the last staggered to his feet, blood streaming from his chin.

Ken'ishi leaped forward and dealt a sharp blow to the back of one's head. Chiba the fisherman bawled in pain and collapsed into a ball like a caterpillar.

The man being pummeled shrugged off his attacker, shoved him away, and turned to attack, but Silver Crane's scabbard against his chest stopped him.

As the combatants stood apart, their faces bruised and swelling, blood dripping from lips and noses, Ken'ishi's nostrils curled at the odor of blood and rancid fear-sweat.

Ryuba, the eldest of the three fishermen brothers, helped Chiba to his feet. The third, Shota, kicked his distracted opponent hard in the belly, then joined his brothers, the deep sneer never leaving his face. The three gathered as a glowering mass, their demeanors spilling contempt upon their younger opponents. These three were older than Ken'ishi, in their late twenties and early thirties. He was only twenty summers.

The three woodcutters—Daiki, Shun, and Sho—were all roughly Ken'ishi's age. Sho, the youngest, with the gash above his ear, was only seventeen, the same age as Ken'ishi when he had arrived in Aoka, the others were twenty-one and twenty-two. All three were strapping young men, but if not for Ken'ishi's arrival, their bruises and scrapes might have been worse. The fishermen had a well-deserved reputation as the roughest men in the village.

Ken'ishi held the curved, black finger of Silver Crane's scabbard between them all. "What is the meaning of this?"

Ryuba stepped forward. "What are you doing interfering? We were just bringing in our catch, and these three jumped us! They deserve worse than they got!"

Chiba rubbed the back of his head, his fingers coming away wet with blood. "You bastard! That wasn't fair!" he slurred at Ken'ishi.

Years of sun and salt spray had leathered Chiba, and had not made his disposition any more pleasant. When Ken'ishi had first encountered these three miscreants, he had killed a man named Yoba, their wicked, drunken father, for stabbing the village's samurai constable in a tavern brawl. Ever since, the family bore him naught but ill will.

Daiki, the eldest of the woodcutters, wiped bloody spittle from his mouth and shouted back, "If you touch my sister again, I'll kill you!"

Ryuba spat. "A lie, constable." The last word dripped with contempt. "None of us has the slightest interest in their sister. She has a face like a horse!"

Daiki lunged forward, but his brothers held him back. "Filthy bastard!"

Norikage stepped into the ragged circle. His voice was ragged from exertion, but he still managed a deep outrage. "This is disgraceful! Somebody speak up, or you shall all find yourselves under arrest!"

Tears of rage glistened in Daiki's eyes. "My sister was gathering ayu from our nets at the river, near nightfall yesterday. Somebody … attacked her."

"Where is Miwa to tell her story?"

Daiki's face fell. "She is home, weeping for shame. She is only fifteen. I will speak for her, if it please you, Norikage-sama."

Norikage said, "Let us hear the tale, and we'll decide whether we must investigate further."

Ken'ishi pointed the butt of his scabbard. "You. Shut up. You'll give Aoka's administrator his due respect."

Daiki said, "As I said, Miwa was fishing for ayu in the river. Somebody jumped her, tore her clothes, tried to—" His voice choked. "She pulled free and ran away."

Ken'ishi said, "Did she see who it was?"

"He had a cloth over his face, but she knows who it was. It was him." Daiki pointed at Chiba.

Daiki kept his eyes downcast. His voice quavered with restraint. "Miwa is a good girl. She doesn't lie. She recognized his eyes. And his foul stench."

Ken'ishi sniffed. "I can smell you from here." Quiet laughter rippled around the throng.

Chiba's face reddened. "You don't know what you're talking about! You think you're a big man with that sword? You're not even from here."

Chiba said, "Aren't real samurai supposed to wear something besides a ponytail?"

Their words burned into Ken'ishi's patience, chipped at his restraint. The truth was that he did not know who his family was, except that he had been born the son of a ronin, a masterless samurai. Silver Crane was all that Ken'ishi knew of his father. The sword was all he had to establish his status as anything but a beggar or a bandit. Without it, who was he?

"Oho!" Chiba grinned like an eel. "Touched a nerve, have I? Sensitive about your hair?"

Ken'ishi's hand clasped Silver Crane's hilt. In a blur, the butt of the lacquered scabbard flicked out and struck Chiba squarely on the forehead. Chiba dropped as if his legs had turned to noodles, and the crowd gasped. Ken'ishi pointed his scabbard at Ryuba. "You and your brother go. Leave this trash."

Ryuba stiffened. "You're going to kill him!"

Norikage stepped forward. "No, we're going to arrest him until we can speak with Miwa and determine the truth of things."

Chiba lay at Ken'ishi's feet. Silver Crane's hilt throbbed strangely in his hand, writhing in his grip as if it wanted to be drawn, to taste the blood of Chiba's wickedness. The distrustful eyes of the villagers touched him like fingers, probing for weakness.

Norikage raised his voice. "It's over. Go."

The crowd began to disperse.

Chiba began to stir. Ken'ishi said to Norikage, "I'll truss him up and take him to the office storage closet."

Norikage scratched his chin, pursing his lips in approval. "I shall go and converse with young Miwa."

"Do you want me to accompany you?"

"You take care of this ruffian. I shall hear the truth of this from her."