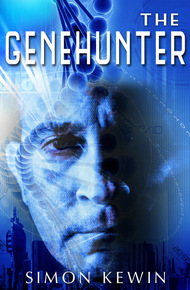 The Genehunter by Simon Kewin

Some secrets are best left buried...

Simms is a genehunter, paid to track down the DNA of the famous and infamous of history for his clients' private collections. What they do with the DNA isn't his problem - even if they are using it to create illegal clones.

He walks a line, pulled in many different directions at once. The law, competing genehunters, ex-lovers, religious nuts and anti-genehunter crazies. But when he works the Boneyard case he discovers that, sometimes, you have to decide which side of the line you're on.

And when he starts to uncover the truth of his own origins he begins to question everything he is and does...

I'm a pushover for any story that depicts a future with bizarre but plausible societal obsessions facilitated by technology. In this case, collecting the genetic code of celebrities has become a pastime for the wealthy, and we're treated to a film noir story of one so-called genehunter who gets in too deep. Totally classic and yet totally novel. – Joseph R. Lallo

He knew something had gone wrong the moment he stepped out of the destination node. This was definitely not London Euston. Too clean, for one thing. Too quiet. He stood in a bare, square room; bright white walls, no doors or windows. The only way in or out was via the jump node he'd stepped from. He scanned it, as he habitually did, hoping to probe the network logs for anyone following him. The plug-ins required for this were highly illegal, but he happened to have a set hidden away in his skull. He got the node's address but nothing more. The gateway was deactivated. He checked his clock. Ten seconds had elapsed since he'd left the clinic. While you were in the jump network you technically didn't exist, had no consciousness of the passage of time. But, wherever he was, at least he had materialised. Everyone knew the stories about people trapped inside the jump networks, stuck for so long no one dared extract them to tell them. It was immortality of sorts, he supposed. Beat having your head cut off and frozen.

A disembodied voice from a metal grill in the opposite wall. He recognized it immediately. Things began to slot into place. So this was it? The whole job had been a GMA sting? Checking up licences?

Ballard laughed his deep, rolling laugh. Was he nearby or somewhere remote? It didn't matter. It was typical of Ballard to lurk in the shadows. Simms really couldn't blame him. They'd met physically once or twice. If his face was as disfigured as Ballard's, if his features dripped like melted plastic, he'd stay hidden too. Acid thrown in his face, it was said, years back. Some thug resisting arrest. Ballard could have got it fixed long ago. Word was he liked his shocking appearance just fine. Found it useful when it came to playing the scary GMA agent.

"Simms, Simms. I'd really be more polite if I were you. I've pulled you out of the jump network to count how many laws you've broken today. Make my day any worse and I'll have to start looking real close."

The GMAn sounded delighted at the prospect.

"Investigate away. You won't find anything, but perhaps it'll make you feel like you're doing something useful with your life."

As he talked, Simms glanced around the room, trying to figure out an escape plan. He came up with precisely nothing. He had good plug-ins, unregistered military-grade tech that might be able to reactivate the jump mechanism. But they would take time to work and the GMA would have counter-measures. Plus, the less Ballard knew about his brain-boosters, the better.

"So," said Ballard. "According to the logs, you've been commissioned to track down the DNA of a Tom Jacks. Purpose: addition to an unnamed collector's molecule library. All completely above-board and legal."

"That's correct. And well done on the reading. Some of those words are tricky."

"I'm puzzled, though," Ballard continued. "You specialise in musicians. Rock gods and dance divas from history. This man was a no one. Times hard are they?"

"I have to work to make a living. You should try it some time."

"Surely you're not intending to pass this Tom Jacks off as the Tom Jacks to some unfortunate citizen?"

"Obviously not. That would be illegal."

"Oh, but wait, what's this?" Ballard continued. "I see you're on your way home from the Bethesda Eternity Clinic, last resting place of Tom Jacks - the wrong Tom Jacks - currently cryogenically preserved and awaiting a cure for pancreatic cancer. Now that is odd, because the estate of this Mr. Jacks has granted no access to his remains."

"Which is why my trip was futile," said Simms. "Shame, but that's how it goes."

"And the large sum of money you just sent from one of your accounts?"

Simms smiled, sure Ballard could at least see him. "A down payment on a slot at the clinic for myself. And thanks for being so concerned about my well-being."

Ballard snorted with laughter. "And if I let the techs loose on your brain and all those exotic plug-ins of yours, you're saying they won't find the DNA of Mr. Jacks encrypted away somewhere?"

A warrant for a full brain-dump on a suspect was still hard to get, even on a genehunter. They both knew that. Simms had to hope it was too much trouble for Ballard to bother.

"Obviously not. That would also be illegal, Agent Ballard. I'm shocked at the suggestion."

"Or, I suppose I could visit the clinic myself," Ballard said. "Ask a few questions, see what really occurred?"

There was the weakness. The attendant should have expunged logs as instructed. He probably wouldn't stick to his story with Ballard bellowing away at him. Yet this was such a small-time job going to all that trouble made no sense. Ballard was having fun with him. Or… yes. He saw, then, what this really was. Some things didn't change.

"You could do all that, yes," said Simms. "And if I have accidentally transgressed some minor regulation, I suppose I'd have to pay some fine?"

"Approaching an official of a registered clinic without the estate's consent is a transgression, Simms."

"OK, Ballard. Just tell me how much you want."

"Forty K should cover it."

Simms considered for a moment. But there wasn't a damn thing he could do. If he refused he'd find his licence revoked one sunny day and that would be that. None of this fine would go near the authorities, sure, but he had no choice.

"My pleasure, Simms. And you be careful out there. There are all sorts of people trying to rip you off."

"Oh, and one more thing before you go. Who is Boneyard?"

Motherfucker. So this whole thing with the money was just a little extra for Ballard? He really, really hated the GMAn.

"Never heard of him. Friend of yours? Sounds unpleasant enough."

"Then you'd tell me. And we stay friends."

"Well, I'm sorry to be a disappointment."

"Oh, I'm used to it. But keep your ears open, OK, Simms? Bring me something useful and I'll think even more highly of you than I already do."

"Good bye, Ballard," said Simms. "And, just a suggestion, maybe spend that money you stole from me on cosmetic surgery? They can work miracles these days, you know."