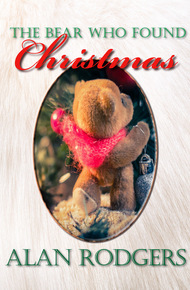 The Bear Who Found Christmas by Alan Rodgers

If you loved The Velveteen Rabbit and enjoy A Christmas Carol, but live in our modern era, you will love The Bear Who Found Christmas. Joey Robins is nine years old and his dad Sam is transferred from Virginia to California. The family has to move cross-country, and Joey won't let the movers take his toy bear. He has to ride in the car with Joey, his dad, and mom Belinda.

Joey is probably too old to love a Teddy Bear, but he does. Bear is his best friend and when you meet his parents, you'll see why. Joey loved the bear so hard and long and pure, so deeply and so truly and so powerfully, that Bear began to grow a heart. Nobody ever would have known about Bear at all, in fact, if Joey hadn't lost him at the motel not far from the haunted shopping mall on Christmas Eve . . . And so begins a great quest, as Bear tries to find Christmas and Joey. A timeless classic for all seasons.

Alan Rodgers, a former bestselling SF/fantasy/thriller writer wrote a charming tale, The Bear Who Found Christmas, before he passed away a few years ago. The good people at Book View Café have been re-releasing most of Alan's books, and they offered this wonderful story to go into this year's bundle. I hope you enjoy it. – Kevin J. Anderson

Joey Robins's Dad got transferred that December from Newport News to San Diego.

It was the worst news Joey had got in a year full of bad news: in a life full of rotten holidays and empty Christmases, moving cross-country at Christmas promised to make for the very worst Christmas of all.

Hated it three days before Christmas when the green-and-white Bekins van rumbled up to the old house with the front porch and the window frames made out of wood. Hated it as the movers loaded all their stuff in their big truck for hours in the bright Virginia cold. Hated it as they closed up the back of the moving van and drove away with everything but the car and Joey and a couple days' worth of clothes.

The movers sure couldn't take Bear. Joey wouldn't let them — wouldn't no matter what.

Because the stuffed toy bear was his only friend, when you got down to it. They were constant companions, or as constant as circumstances allowed. Joey had no other friends to speak of, partly because the Robinses never stayed anywhere long enough for Joey to get to know anyone. But partly too Joey's best friend was a stuffed toy bear because something in the boy was broken, busted good a good long time ago, and the plain fact was that Joey wasn't made right inside for getting on with people made of flesh and blood.

Maybe it was moving that broke him.

The Robinses moved at least three times every year, and sometimes more. That didn't make having friends impossible — not quite.

There were the kids back in Raleigh — after he'd been there six weeks they'd elected him president of his third-grade class for the month of March. But before April was over they'd moved again, to Boston. What good were friends like that when you could only have them for three months? And besides, the teacher really goaded the class into electing him. That wasn't fair, and when Joey was being honest with himself he knew it wasn't real.

Mom and Dad weren't much for company.

Mom was even worse. Not because she wasn't home for him — she was always home — but because she liked to drink.

Mom got mean when she drank. When she was drinking Joey did everything he could to avoid her.

It isn't right — isn't healthy — for an eight-year-old (going on nine!) boy to love a Teddy bear more than anything else in the world.

When his Dad had time to worry over Joey, he worried about the bear especially.

But it isn't right for anyone to be as alone as Joey Robins was, either, and loving a Teddy Bear like it was your Dad, your Mom, and all your friends is a lot better than not having anyone to love at all. Or so his father tried to reassure himself.

And maybe he was right.

Because Joey loved the bear so hard and long and pure, so deeply and so truly and so powerfully that the bear began to grow a heart.

Not that you could touch or feel or notice it. It was a spirit heart, made of ghost instead of flesh and blood. It didn't make him speak or sing or move or grant miracles. The only difference it made was that as Joey loved the bear, the bear began to love him too.

It happens to toys sometimes. No one ever notices.

Something strange happened when the Robinses were on the road near Charleston, West Virginia — just before they turned off I-77 and got back onto I-64.

Later when he thought back about it it seemed to Joey that Christmas and miracles were at the root of it. That something about the powerful spirit of the season combined with Joey's loneliness to touch the bear, to make something magical, something powerful, something that changed Bear entirely and forever. . . .

Or maybe not. Who knew for sure? Nobody saw but Joey.

Maybe because that was the way it should have been — just the boy and the bear alone, and nobody else to see. Or maybe it didn't happen at all. Maybe it was just a trick of the light that rolled in and out of the car from the passing street lamps.

But Joey never thought that. Not for a minute.

Because he knew — knew in his heart that the bear was alive. And if he'd ever doubted it he knew for certain when he saw those glossy button eyes blink open and closed and open again.

Delicate felt eyelids fluttering down and again. And for just an instant the bear seemed to smile — but no, no that was only a trick of the light.

Then for half an instant he thought about how some girly dolls have eyes that flutter just like that, and thought maybe Bear had funny eyes like that and maybe he'd never noticed in all these years. . . .

No. Bear's eyes were only buttons, and Joey knew them very well, same as he knew everything about Bear. Him and Bear were tight, and there wasn't anything Joey didn't know about him.

Unless it was something new.

Then for an instant the car went dark as they rolled under an overpass, and when it was light again Bear's eyes were only button eyes again, and much as Joey touched them, felt them, probed all around them — hard as he tried to figure out just what he'd seen, Joey only found plain button eyes.

After a while he sighed and shrugged and turned to watch the darkness passing outside his window. And began to wonder if his eyes had deceived him in the strange unsteady light.