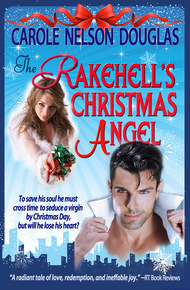 Now, together at last!

Two novellas create one thrilling, touching, funny and scary linked tale of a Christmas battle between Heaven and Hell. Two hell-bound rogues, one from genteel nineteenth-century England and one from twenty-first century rowdy, rock-and-roll USA, must cross time to do a truly bad deed by Christmas Day. Only that will save their tawdry souls from Heaven's judgment. Can a mere angel stop them?

Dashing Regency rake Adrian Ashworth always wins with women and cards. One pre-Christmas night he drives his carriage too recklessly and awakens in the anteroom . . . to Hell. All the best worst people are there, but he can't get in.

Christmas, Adrian awakens in another body in a terrifying place and time, where sin is not what it used to be. . . .

Carole Nelson Douglas is best known for her Midnight Louie cat mysteries and her Delilah Street urban fantasy series; we usually see each other at DragonCon each year, and she's been a delightful addition to several of my StoryBundles. She offered me an urban fantasy holiday romance to add just the right amount of charm for warm Christmas cheer. – Kevin J. Anderson

Cast out by Hell itself! Adrian Ashford had never been so humiliated in all his life as after the end of it.

The gleaming cherry wood doors had become brazen barriers that loomed into the black fog wreathing the remains of the room. Everything was chill, hard, huge beyond comprehension and as remote as regret. Adrian felt himself becoming numb and cold, felt Death's icy grip seize and squeeze him into a lifeless puppet.

Then he was hurling again through black night, vague glimmers exploding at the hems of his vision. He hit the pavement with a bone-numbing crash. Colors reeled behind the blackness of his eyes. They must be shut. Again he heard the sickening collapse of the perch phaeton, the screams of falling horses, felt the lash of flailing reins.

Again? Was he to die again and again? Was that his punishment for being too bad for Heaven and too good for Hell?

Someone—Pitt?—seized his shirt to haul him up into the blinding light. A bolt of blue lightning reddened like blood before his eyes. The hateful noise in his head became the cacophony of a chanting crowd, its roar torturing his reviving senses. Sweat drenched his body, yet his skin felt clammy.

Adrian opened his eyes to the most terrifying scene he could imagine. He must have been tricked by the Father of Lies and hurled into the deepest pit of Hell itself. Why had he hoped that he could redeem himself and become fit for the upper hierarchy of Hell?

Again the very naiveté that had misled him into wasting opportunities for truly large-scale sin in his life had betrayed him, he thought bitterly. The Devil must have sensed his weakness, his regret for Lashbrook's self-inflicted death, must have known that he never meant to hurt anyone, only to please himself. What a miserable, niggling, minor sinner he was! How undeserving of the Yorick Club.

His captor dragged him into the bright light, rasping gibberish in his ear. "Buck up, Adrian, old chap. Thought you were a goner just now, for sure. Since you're up and about again, sneer for the people like a good bad boy. Come on!"

He was dragged to the edge of a pit writhing with doomed souls, whose wails heightened as he came nearer. Some held flickering candle flames. All swayed to the raucous rhythm of their madness, dressed in tatters that showed slices of flesh not meant for public view. Men and women mixed together in that unspeakable madhouse mob, screaming and stretching scrawny arms like tentacles for him.

Just below, a clot of nearly naked women struggled to crawl from the pit, only held back by beefy men who were shirtless except for leather vests, and attired in leather breeches.

"Get it together, man!" his captor screeched in his ear, propelling him to a tall silver-metal wand whose supporting base spewed narrow black serpents along the pit lip.

Adrian regarded the fiend beside him with wonder. Long, unkempt hair haloed his head and shoulders. Cryptic markings covered his bare arms and chest. Crude metal chains jangled around his neck.

The man leaned his mouth to the silver wand as if to drink from it, still holding Adrian upright by some feat of strength belied by his lean, wiry body.

"Never let it be said," he shouted to the mob, "that Adrian Lord and Dark Angel don't knock themselves out for their fans!"

The meaningless words echoed back like loud weapons. Adrian put his hands to his ears as the mobs' screams rose to a deafening pitch and even the silver wand began to screech with them.

"Come on, man." At last! His captor dragged Adrian away from the pit of horrifying hordes.

Adrian glimpsed other unappetizing fellows on an upraised platform. He would almost call it a stage, had Hell such places as theaters. Awful sharp sounds and demonic drumming made the earth beneath his feet thrum. No, he trod a wooden floor. This was indeed a stage, albeit a queer one.

In moments, the dark peace of the stage wings enfolded him. Yet even there equally ugly demons labored over massive sideboards lit by hellish lights and punctured by coiling cables of serpentine wires.

His heart was pounding, Adrian suddenly realized. He stopped walking, despite the urging of his keeper.

"I'm alive," he noted with further wonder. That is what he had not felt at the antechamber to the Yorick Club: the ever-present soft thunder of a human heartbeat beneath his skin. "I'm . . . alive again."

"No thanks to you, dude." The man's custodial grip loosened. "Really bummed me out, man, when you kissed the floorboards after your final prance around. I figured you for an O.D., for sure. What are you tryin' to do, kill yourself in public? Luckily, the tour's over and you can do yourself in for the holidays on your own time. Merry Christmas. Better lay off treating the coke fairy to brandy chasers, though, if you want my advice."