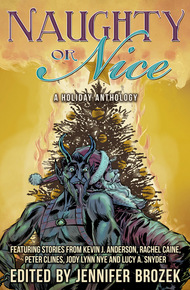 Holiday stories are usually filled with bad people becoming good and everything turning out nice and sweet in the end.

Not so with Naughty or Nice: A Holiday Anthology. The spirit of this adult-oriented anthology is to have fun with the paranormal, fantasy, science fiction, and horror genres during the holiday season while raising money for cystic fibrosis. As part of Kevin J. Anderson's Holiday Story Bundle, the first two months of profit on this anthology will go directly to a foundation for cystic fibrosis research.

With a little bit of nice, a sprinkle of dark, a handful of sexy, and a whole lot of naughty, this anthology is filled with blushes, laughs, and gasps. This is not your average holiday reading. From the story behind Marley's fate to a little elf who makes the perfect "toy" to the holiday rituals that keep the world going, Naughty or Nice keeps the pages turning. Be prepared to be a little bit shocked.

The Naughty or Nice anthology, to benefit Cystic Fibrosis research, is the main reason for this bundle. Jennifer Brozek, the editor, approached me to see if I would write a story for the book, provided the Kickstarter funded. Not only did I agree to do a story for her (a brand new Dan Shamble, Zombie PI Christmas story!) but I offered to put together this bundle, which would help to cover the expenses and raise even more money for the cause. Ho ho ho! – Kevin J. Anderson

When an Aztec mummy stopped me on the streets of the Unnatural Quarter, I knew it had to be an important problem. "Excuse me, are you Dan Shamble? Zombie PI?"

"Chambeaux," I corrected automatically, because so many people—both naturals and unnaturals—make the mistake. "But yes, that's me—of Chambeaux & Deyer Investigations."

The day was bright and sunny, and we had paused under a street light where two precariously balanced werewolves were stringing holiday lights. One mockingly dangled a fistful of mistletoe over the other, demanding a kiss. The second werewolf said, "Not with your ugly, furry muzzle!"

Across the street, a skeleton lounged with a saxophone against another lamppost, ready to play a mournful holiday tune, but it was all for show because the skeleton wasn't a very effective sax player, due to his lack of lungs. Skeleton musicians usually stick to playing the piano.

The Aztec mummy was withered and shriveled. The remnants of his raisin-like eyes were set deeply into hollows in his face. He hobbled along, his back bent, his knees of the extra-knobby variety. His clothes were gaudy and colorful, the finest Aztec chíc. He extended a gnarled hand, and I shook it, careful not to break any bones. Mummies can be so brittle, and most refuse to be rehydrated as a matter of pride.

The mummy cleared his throat, and a small moth fluttered out. "Kashewpetl." I realized it was his Aztec name rather than a head cold. "And I need you to track down my turkey. A special wish turkey." He leaned forward, and his intent raisin eyes transfixed me. "I need to have it by Christmas."

"That's the day after tomorrow," I said.

Excerpt from BY THE LIGHT OF THE SILVERY MOON by Rachel Caine.

Mallory Langer stopped the taps, sat on the edge of the old Victorian tub, angled the black obsidian to catch the moonlight, and directed the moonlight into the still bath water. Show me, she dared it. Go on. Show me.

Was that a face? A still, quiet, pale face? Or just the moon? She bent closer, staring into the water... and yes, it was a face, forming in the water. The face of a man. He had dark, piercing eyes with dark shadows beneath, and a sharp chin, and dark hair spilling out from under a flat cap like golfers sometimes wore. There was something about his eyes that were very unsettling. Mallory blinked. Her eyes were obviously playing tricks, because how could she possibly be seeing anything like that... but somehow, she was. She could see him turn his head, and then walk away. As she angled the mirror more, she saw more of him than his face. He was a shabby, in a ragged jacket like some homeless man, and he was walking on black and white tile.

Was she seeing the future? She felt a chill, and hoped not. He didn't look like any son she'd ever have.

Mallory instinctively looked, but the bathroom was empty. When she looked back into the tub, he was going out the bathroom door... only she realized, as she angled the mirror around, that it wasn't her bathroom. Not exactly. It was another time, though the tub seemed to be in the right place. There were old, square shelves and a single wash basin on a plain stand, not like their nice Victorian dual sinks. No, not the same room at all.

Weird. Very weird. She took the mirror out into the bedroom, and angled it. The moonlight didn't reach this far from the window, but it didn't seem to matter; neither did the lack of water for it to reflect into. Now, she could see the image on the surface, clear as if it was a real mirror, reflecting a reality that didn't exist.

The bedroom had the same dimensions, but it wasn't her bedroom. The bed was an ancient old cast-iron thing, ugly and heavy, with a plain sheet and blanket. It was made up. Nobody was sleeping in it. As she angled the mirror, she saw what must have been a child's room, a little girl's; she saw a toy chest and some frilly clothing neatly folded on shelves. I'm looking into the past, she thought. The past of this house. What had Eric called it? Catoptromancy? It sounded like a joke about buttered toast strapped to a cat's back or something, but it must have been... real. This mirror was old. It had some kind of weird power to it.