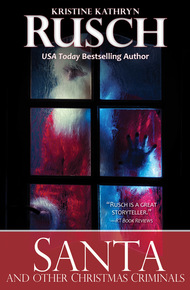 Santa and Other Christmas Criminals by Kristine Kathryn Rusch

Think about it: Santa sneaks in during the dead of night. He steals cookies, drinks some milk, maybe tracks ashes all over the living room. Yeah, he leaves presents, but maybe that's just a cover for more nefarious behavior. Who knows…besides Santa himself?

The darker side of Santa shows up in two of the Christmas stories in this collection, "Doubting Thomas" and "Rehabilitation." Real criminals—the scary kind—make an appearance in "Snow Angels" and "Substitutions." And just to add a bit of the proper Christmas sentiment, "Nutball Season" closes the volume—with a not-so-sinister Santa, a little boy, and a cop stamping his feet in the snow on Christmas Eve.

Let me say right off: Santa's been good to me. He always arrived on time. He ate the obligatory cookies, left some awesome presents, and managed to keep the mystique in Christmas longer than necessary. I met him on a few occasions, mostly in department stores, but once at a holiday party at the college where my father taught.

Santa even showed up at my neighbor's house the Sunday before Christmas. Santa walked in the front door and gave all the little kids in the room (including me) a present. He tracked in snow, and then with a few deep chuckles, he left.

We weren't allowed to watch him leave—we were told it would spook the reindeer. We were a bit concerned that Santa hadn't used the chimney, until someone (my friend's dad?) explained that the chimney led directly into the furnace, and sliding into the furnace just wasn't safe.

Clearly, my relationship with Santa has been a good one. So why do I write stories in which he's the villain? Or if not the villain then a possibly shady (or insane) character? Maybe because he betrayed me.

The relationship every little kid has with Santa always ends in betrayal. He shows up, he promises magic, he delivers magic, and then—one day—someone says he's not real. And we're supposed to believe that.

Really, he's just moved on to other kids. Kids who are just a little more starry-eyed. Kids who are newer, fresher, younger. Who wouldn't feel betrayed?

Santa shows up in this collection three times. "Rehabilitation" follows the adventures of a mall Santa during the Christmas season that changes his life. "Doubting Thomas" explains the importance of chimneys, and why Santa does all of that sneaking around. And my personal favorite, "Nutball Season," harks back to Miracle on 34th Street which is, by far, the best Christmas movie ever made.

Criminals show up in every story, except the last one. Sometimes the criminals are a bit too broad to be believed, but sometimes they're truly scary. In "Snow Angels," the annual hunt for a Christmas tree turns dark. And in "Substitutions," Christmas Eve takes a decidedly sinister twist for a replacement worker on the dirtiest of dirty jobs.

So if you're a bit tired of the same old sappy Christmas tales, this collection is for you. And if you read every story contained herein, you might never look at the Jolly Old Elf in quite the same way again.